Days of Glory exploits the pull in weights 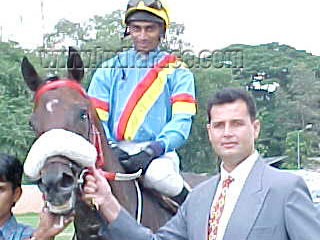 Days of Glory (Harish up), winner of the S M Ramakrishna Roa Memorial Cup being led in by trainer M.Eshwer

With Silvertre flopping miserably, the task for bottom-weighted Days of Glory became easier in the 1200 metres S M Ramakrishna Rao Memorial Trophy, the feature event of Saturday. Soviet Bay, who is known for his unpredictable ways, came up with a flourishing run to finish second after a bewildering run in his last essay.
The daughter of Alnasr Alwasheek, Silvertre was expected to turn out in pink of condition after having run twice during the season. Silvertre was the betting rage, with the bottom-weighted Days of Glory being next in demand. Silvertre played up while being stalled and expended quite a bit of her energy. This eventually told on her performance. Silvertre, after being prominently positioned, packed up abruptly. Days of Glory who led the field from the word `go’, held on to win from Soviet Bay who found the front-runner too good for comfort. The Flying Scotsman, who was running for the first time during the season, finished on purposefully and edged out Allabreva for the third spot. Flying Scotsman could be seen in better light in his next outing.
Another Time made amends for her last start failure with an easy win in the 1600 metres Treasure Girl Plate, a race for maiden three year olds. Another Time had been asked to do too much last time out and jockey Prakash had escaped the wrath of the authorities for riding in ill-judged race. Another Time was ridden well off the pace this time too but the quality of the opposition being what it was; Another Time had no difficulty in winning.
Both the divisions of the Chaitanya Chakram Plate went the way of Rashid Byramji wards. Galaxie Dust who had the benefit of a race run comfortably won the upper division of the race. There was inspired support for Arctic Snow, full sister to the celebrated Snow Dew, but she was clearly in need of this run. Banzai and Cherry Blue disputed for minor slots. In the lower division of the same race, Coco Beach who had failed as a favourite easily had the measure of the opposition, winning as she pleased.
Mythical Star recorded an encore, winning the 2400 metres V G Saravanam Memorial Cup quite easily. Jockey Sunny Chinoy was not up to handling the one paced Adolfito who was a tame second. However, Chinoy was seen in better light when steering Abysssinia to a shock victory in the Royal Challenge Plate, to bring off the biggest upset of the day.
Jockey Prithviraj recorded his first win for the season through favourite Star Diamond who proved too good for the opposition in the 1200 metres Parsiana Plate. The daughter of Procida, Star Diamond had a troubled passage despite which the favourite had something to spare when finishing clear of Blush With Pride. Sushmita who had recently changed stables, smashed the opposition in the 1200 metres Kranji Plate. Sushmitha was hanging badly but jockey Warren Singh was able it pull out his mount from the rails and keep her going. Nuaraaz who was the medium of a failed gamble last time out, did all the front-running till passed by the eventual winner.