Network pulls off an upset 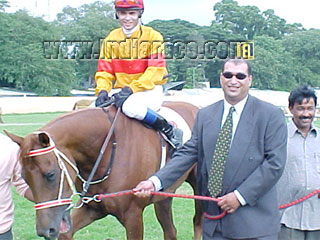 NETWORK (C.Alford up), winner of the The Dashmesh and Hargobind Stud Bangalore Summer Million (GRADE III) being led in by trainer Arjun Mangalorkar

Arjun Mangalorkar trained Network brought off an upset in the Gr 3 Dashmesh And Hargobind Stud Bangalore Summer Million that featured Sunday’s races. Strictly speaking, it was not an upset because Network had credentials to win but with the direction of money being entirely directed towards Fabulous Star, the former who should have been a fancied runner going by the relative merits of the runners, was ignored in the betting ring. Unfortunately, in racing one is wiser after the event.
Fabulous Star had finished an eye-catching third in the Kingfisher Derby and Network had finished less than three lengths behind the former at level weights. Now enjoying a distinct pull in weights, Network should have been one of the strongly fancied runners. But then public expectation often is decided by the flood of money that a runner attracts rather than by merit. Name And Fame, Castle Park and L’Avenir were more fancied than Network.
As the gates banged open for the mile long trip, L’Avenir who was sluggish at the start, bolted to the front, with Network racing second and the rest evenly spaced out behind the front-runners. The scorching pace perhaps undid L’Avenir who was running for the first time during the season as jockey Srinath perhaps failed to ride him with more restraint. Though L’Avenir came in a few lengths ahead of the rest, the son of Razeen failed to quicken even as Network quickly assumed command. L’Avenir battled on resolutely but was definitely rusty. In the meanwhile, Fabulous Star essayed a strong challenge even as stablemate Name And Fame came through a pocket to flash home with a good burst of speed. Network; despite drifting out of a straight course nevertheless had ¾ of a length to spare to top-weighted Name And Fame who in turn was a short head in front of favourite Fabulous Star. L’Avenir was a close fourth and after this run, the son of Razeen is bound to come on a lot.
Though Network did veer out of a straight course, he did not cause the kind of interference that jockey Prakash who rode Fabulous Star felt and as such, his objection against C Alford who rode Network was thrown out by the Stewards in quick time. Castle Park ran a poor race and is not as good as she was made out to be. Or is it that the progeny of Diffident don’t train on? Only time will tell.
Though trainer Padmanabhan had reason to be disappointed with L’Avenir running below his expectations, he had adequate compensation coming in the form of the smashing victory recorded by Prince Valiant. The speedy son of Green Forest, Prince Valiant had given hopes of turning out into a top class performer after his smashing debut in winter but had twice run below par to douse the hopes. Now that he seems to have overcome the problems that appeared to have troubled him, his progress should be followed with interest. He is due to run in the Nanoli Million at Mysore where he is likely to take on Priceless and their duel is well worth waiting for. Just Brave who had finished ahead of Prince Valiant when the two clashed last time out in the Knock Out Million, was a tame second. Flash First who finished on from way behind, was given a light ride and is the one to watch when the five-year old mare comes into money.
Padmanabhan had earlier saddled Southern Goddess to a facile victory in the day’s opener. The daughter of Brave Hunter proved too good for the opposition, easily sailing past the front-running Raptures to win as she pleased. Talented Lady ran third but she may live up to the high expectations of the stable. Star Above’s poor fourth confirmed that he is very ordinary.
Jockey Harish who is in news for more reason than one, made free use of the whip on Franco Leone but the tear away tactics undid the five-year old’s chances as he surrendered virtually in the last stride to Fantastic Fortune who covered lot of ground on the front-runner. The Stewards have opened an enquiry into the excessive use of the whip by Harish. He is already under suspension for dangerous riding on Ifllookscouldkill only the previous day. There was a flood of money on Predecessor but the favourite was none too well placed to make it.
Zareer Darashah, who has found winners hard to come by, had another winner through Rhythm `N’ Blues who recorded an encore, out sprinting the rest in the Allied Forces Plate (Div I). Favourite Sushmitha found the front-runner too speedy for comfort. In the lower division of the race, Conquering Star proved too good for Ankole. Crystal Beauty landed a coup in the Basque Plate, easily containing the challenge of Three Coins.
Star Successor found momentum in time to sail past the front running to win the 1200 metres Lt Col Gaunt memorial Cup (Div I) from Cape Martin. With the highly rated Premier Classe from trainer Imtiaz Sait’s yard having been withdrawn because of a fever, the race was robbed off its competitive interest. However, the trainer had the satisfaction of leading in the winner in the lower division through Buzz Lightyear who won quite impressively. Favourite Amber Windsor found foot rather too late to be of any use.