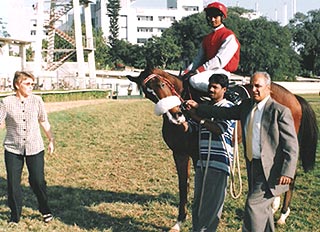 Zareer Darashah, who had struck a bad patch, had a confidence boosting double on Saturday. Seasoned performer Just Brave who had given the trainer many a happy moment including his maiden win at Mumbai, struck form decisively to win the Delhi Race Club Cup which featured the day’s races in emphatic fashion. The victory of Just Brave was round the corner as his earlier runs in the season were suggestive of an imminent success. Apprentice Gnaneshwar rode with confidence on Just Brave to guide the lesser-fancied runner to a facile win over a late-finishing Saratoga Sizzle and Star Alone. Favourite Rio Tinto who took charge on turning for home, failed to sustain the effort and faded out of the reckoning as quickly as he had showed out.
Rio Tinto appeared to be better on weights but definitely not on relative merit vis-à-vis Just Brave who had run with some of the top stalwarts like Zurbaran and Name And Fame and it showed the manner in which the son of Brave Hunter acquitted himself over a seven-furlong trip that suits him the best. Gnaneshwar had Just Brave racing a handy third as Chitty Bang who is on a weight reducing mission for a possible coup at
Mysore, set a fast pace, with favourite Rio Tinto in a handy second position. Rounding the final bend, Chitty Bang slackened and Rio Tinto took charge even as Just Brave was trying to poke through in the middle. Just when it looked as though Rio Tinto would tear away, Just Brave picked up momentum and easily sailed past the front-runner and established an unassailable lead. Rio Tinto was beaten long way from home while Saratoga Sizzle found foot rather late but was a suggestive second ahead of Star Alone. Refresher who had run a brilliant race in his last outing, made no show. Apprentice Chandrashekar who rode Saratoga Sizzle has done well with free-running horses racing in front but when he is confronted with the problem of having to make his move from behind, he has been found wanting.
Centralito looked a cinch in the 2000 metres H C Patel Memorial Plate especially since the daughter of Razeen was running in the 20 to 35 category race. Centralito had run Chilli Girl close at level weights at
Hyderabad in the Guineas but the tail-swishing filly suddenly dropped galloping after passing the mile marker and went out of contention. Breno who was nursed in the middle by David Badel, quickened well for home and won with a fair degree of ease. Jimbo grimly held on to the runner-up spot ahead of a late-finishing Lago Magggiore who was putting in good work when the cause was lost. Now that Centralito has done the unthinkable, it is prudent to let her come back to normal behaviour before trusting her again.
A splendid piece of power-packed finish by Frenchman Ronen Thomas ensured a thrilling win for Padmanabhan trained Mystic Heights. Full sister to Far Always who won the Indian 1000 Guineas last week, Mystic Heights cornered maximum support in the ring. Aerographer had things under control inside the final furlong and shaped like a winner as Mystic Heights was hanging in. Thomas straightened out his mount and pushed the four-year old with all the resources at his command to get the nod virtually in the last stride. It was indeed an exciting performance from the Frenchman. Summer Storm continued to show an upward surge in his form by being a close third.
Darashah trained Blairgowrie won the Kentucky Plate, a race for maiden two-year olds in exciting fashion. Perhaps the only progeny of General Dane racing in India, Blairgowrie won well from Power of Dreams and Highflying. Blairgowrie is a good type of a juvenile.
There was big support for Dancer’s Quiz in the Bangarpet Plate but the four-year old filly who was
none too well placed approaching the final bend, was made to travel wide and improve her position at the steepest part of the course. The effort told on her because despite covering plenty of leeway and looking like collaring the front-running Afresh, she weakened to finish a tame second. In the day’s other action, St Klaine readily justified the favouritism while Inquisitive won as a horse from trainer Mohan Valavi yard does i.e. win at fancy odds at the expense of Altosax, Deanston and the rest. The trainer has made a fine art of disguising the form of his horses so much so that his winners always command a price.