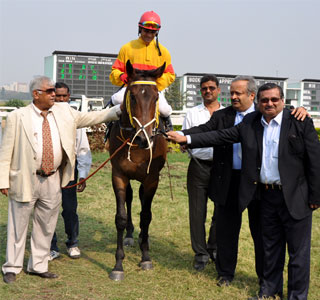 The lengthy nine-event card on Tuesday produced its fair share of outsiders and favourites. One of the salient features of the afternoon was a high-priced hat-trick by NS Parmar. The other was the fifth consecutive victory of the Imtiaz Sait-trained filly Oriental Diana. She won her first race in the monsoon meet and the subsequent four races this winter – quite a feat and a definite candidate for the horse-of-the-season award.

But first things first. Let’s have a look at the two trophy events. The even-money favourite Noble Defender (China Visit-Allesca), with Christopher Alford astride, made the Bookmakers Association Trophy a one-horse race. The colt showed a clean pair of heels from the outset and though Victory Vibes tried her utmost to keep pace, she faded out in the straight. Unfortunately, there was a faller in the race. Lougherne had to be put down. Hadrian too broke down before the bend.

The CROS Trophy saw Bharath Singh-trained Impressive Move installed as the firm favourite at 10-to-7-on. The filly by Mr Mellon out of Coco Beach lost position mid-way through the 1100 metres scurry but came with a fluent run in the straight under Trevor Patel’s stick to collar the front-running Zip Zap Zoom and outclass the field.

Parmar commenced his treble with the 10/1 shot Istanbul (Emerald Cat-Flying Rani). The Pesi Shroff-trained colt was neglected in the ring but was the first to jump out. Speedy Whispering Grass took over the running early with Istanbul in tow. A couple of cracks opposite the grandstand was all that was required to send Istanbul clear. Mistral appeared to be out of sorts and may have been done in by an outside draw and false rails.

Parmar’s second winner was the 7/1 five-year-old Il Bronzino (Ikhtyar-Glensanda), also from Shroff’s yard. He got the better of the two fancied four-year-olds Aletris and Alienation. The winner is known to be a genuine miler and moved well in the final furlong of the seven-furlong trip, while the others appeared to be struggling. The early pace set by Cee Four was pretty quick.

Parmar completed his hat-trick with the amazing chestnut filly Oriental Diana (Black Cash-Revived Up). She notched up her first win in monsoon when rated 28. On Tuesday, she won with a rating of 77. She has been penalized 6.5kg and may go on to win in the highest category as she is a courageous one. Apprentice Zarar Alam rightly gave Debonaire Girl a free rein but the speedster had no answer to the winner’s grit in the final 100 metres.

The day commenced with Vikash Jaiswal and Imran Chisty combining well to bring home the bacon with the 6/1 shot Pine Valley. Money poured in on Harness Free and he closed as the favourite. Chisty gradually improved his position and hit the front at the 600. There was no looking back from that point onwards. However, the favourite’s run was a notable one and may pay to follow. Though Melody Belle was unimpressive, she will be better for this run as it is both weight-reducing and stamina building.

The upper division of the Colonial Handicap saw Royal Companion installed as the hapless and form-less public choice in the tote. Not surprisingly, he finished in the ruck. The race was won with a degree of comfort by Imran Chisty astride Devilitto (Black Cash-Zografi), from Deepak Karki’s yard. The same trainer completed a well-deserved double with Focus (Burden Of Proof-Shahandeh) bagging the lower division of the same event. Top-weight jockey Mahesh rode a well-calculated and powerful finish to brush aside Gorshkov.

The curtain came down with the running of the lower division of the Amazing Princess Handicap. The withdrawal of the piping hot favourite Sokudo left the road clear for Arti Doctor’s Mesmerizer (Senure-So Amazing) to make a mark. He was nevertheless given a scare by owner-mate Starrer who was on a start-to-finish mission. Second favourite Superior Quest returned bleeding.