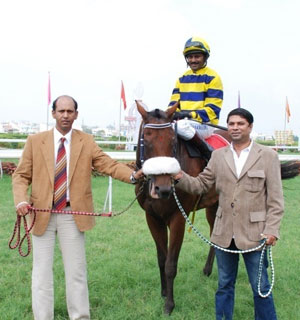 Kohinoor Wish lifted the K. Mahipathi Rao Memorial Million, the feature of Independence Day’s races at Hyderabad. The son of Gaswar, being saddled from Prasad Raju’s stable for the first time, won in an impressive fashion. Having won both his starts in winter, Kohinoor Wish had shown his prowess at Bangalore, winning a race and placing well in the other two starts.
Going into the race, Orient Glory hit the front and led by over seven lengths as the field passed the 600 metres marker. Mallesh Narredu, not perturbed by Orient Glory’s runaway tactics, settled Kohinoor Wish in fourth position. As they showed up on the straight, the shifting of gears on Kohinoor Wish was very swift and the winner was spotted a long way from home. Golden Queen moved in to take the second spot ahead of Moheena.
K. Satheesh’s Star Composer won the Independence Cup, beating his 14 rivals with authority. Finishing third to Walnut Creek, in his last essay, was considered to his best effort by many and therefore found very few friends in the betting. Red River Rebel had taken off at the start and tried to make it to the finish. Star Composer was well positioned in third, till midway up the straight and when urged by apprentice P. Venkat, the six year-old produced good acceleration to get the better of Red River Rebel by a good two lengths. This win of P. Venkat was his tenth and he has now graduated to the next level, shedding off 1.5 kilograms from his entitled allowance. Chiquelle warmed up late to finish a close third.
The Regency Cup for horses in category III turned out to be a fight between the two top market fancies, Armador and Sweet Heart. The two left the field and fought out the last 300 metres. Inside the final furlong, Armador started to shift out under pressure but the persistence of jockey Rupesh kept him in front by a length from Sweet Heart.
The Grand Parade Cup was run in divisions. The higher division was won by favourite Vendetta from trainer Shehzad Abbas’s yard, while the lower went in favour of not so friendly Dhruthiman. Vendetta chased the front-running Standing Ovation with Menlo Park, Indian Storm and Glorious Bay following closely. As the field passed the distance marker, Vendetta, in the control of J.G. Sampson emerged clear to record a facile win. Menlo Park, Indian Storm, Standing Ovation and Disco Flash finished behind the winner in that order.
The lower division turned out to be a three-way finish between Dhruthiman, Combined Force and Phar Lap. The last-named tried to make it a start-to-finish affair but lost steam in the dying moments of the race to finish third. Dhruthiman got stronger in the last 100 metres and thwarted off the sustained effort of Combined Force. Victorous Sally, who had chased the leader Phar Lap for most part of the race, ended up fourth, while King of Court improved after a slow beginning to finish fifth.
Hardccore lifted the division I of the Noble Quest Plate, grabbing the initiative from Al Malawi. Thunder King, found to be hanging in, had to be pulled out by P.S. Chouhan and by the time he started to raise a gallop the race was in the safe keeping of Hardccore. Set me Free won the lower division, taking charge from the front running Indian Brave Heart on the straight. Man on Fire and Allegation filled the frame.
A good gamble on Blazing Asian was pulled off in the opening event of the day, the Vijayanagaram Plate. Running after almost a year, R.H. Sequeira-trained Blazing Asian had given clear indications of his fitness in his morning workouts. After taking a good jump, Blazing Asian led early and let Tiara cut the wind till the last 400 metres and then drew away to score an encore.