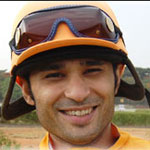 Calcutta’s champion jockey Christopher Alford achieved the much coveted target of 1,000 winners while astride Arktouros this afternoon and galloped into the jockeys’ ‘hall of fame’. It was a deeply cherished dream for the 34-year-old Calcuttan who took 16 long years to reach the milestone after riding his first winner Champagne Times at the age of 18 as an apprentice on January 14, 1995. Christopher thus joins such elite personalities as the three Narredus (Mallesh, Satish and Suraj), Jagdish, Khade, Aslam Kader, Robin Corner and a few others.
While speaking exclusively to indiarace.com, Christopher was in an elated mood and gave glimpses of his rollercoaster ride to the top. The Alford name has been associated with Calcutta races for the past four decades. His father Freddie and uncles Philip and Richard always had innumerable fans among punters of all strata.
Richard Alford was of course a champion in his own right. Despite his bodyweight being about 54 kg as a rider, Richard has 960 odd winners to his name. This was in a era when jet travel was not that frequent and racing was only once a week at this centre. He won the championship in Bangalore in the early seventies and several times in Calcutta.
As in thoroughbred racing, bloodline often tells in professions associated with the sport. The Byramjis have been well-known trainers for three generations. Uttam Singh’s son Zadmal was equally adept with fillies as his father. The Shahs and Reubens have more than one generation doing duty at racecourses across the country. Thus, in a way it was but natural for Christopher to take up the reins.
The current Calcutta icon, in fact, has a strong Bangalore link. He studied at St Patrick’s School and Cathedral High School before joining the well-known BARI riding school at the Bangalore racecourse. He turned out to be quite a ‘natural’ and quickly picked up the nuances of the art. Nevertheless, the breaks did not come thick and fast as one would have expected. Perhaps, being a Capricorn (his birthday is 29th December) had something to do with it. “I stuck to the basics and hard work. I did not idolize any jockey as such,” says Christopher.
After he rode his second winner on February 18, 1995, Christopher had to wait for almost a year before seeing the winning post again. D.S. Sahwney’s Swelegant was the third winner on January 27, 1996. This was, in fact, rather apt as his first winner Champagne Times belonged to the same person. Thereafter, he was riding winners at regular intervals for owners like Harish Ramchandhani, Sahwney and Sumant Dalmiya. But in retrospect, September 13, 1996 must be considered a red-letter day in the illustrious career of Christopher Alford. For that was the very day that he rode his first winner (Sunrise Song) for the now famous red-and-gold colours of Deepak Khaitan – Calcutta’s premier owner. His next winner in those colours came almost two years later atop Bold Times on July 2, 1998. However, in the meanwhile he was riding very successfully for the Harish Ramchandhani stable. Very soon, Christopher Alford was to become the retained rider of Calcutta’s leading stable of Deepak Khaitan.
It would perhaps not be wrong to say that from the Monsoon of 1999, more than 90 per cent of C.Alford’s winners have been for the colours of Deepak Khaitan. There has simply been no looking back. In fact, from the time he notched up his 72nd career win atop Khaitan’s Firecreek on March 13 1999, till date, it has more or less been all red-and-gold.
Christopher says that he holds his stable in high esteem and deeply respects owner Deepak Khaitan. He also maintains an extremely good rapport with trainer Vijay Singh. “Vijay and I have a very good understanding and have no professional problems whatsoever,” were his words. “It has been a very rewarding experience to work with the city’s leading outfit for 12 years,” he adds. “However, during my long career, I have ridden winners for most of the leading stables – a couple for MAM Ramaswamy and several for Vijay Mallya.”
Christopher still reminisces about the three wins which brought him the greatest pleasure during the past 16 years. The first was only his 40th career triumph atop Sabre Dance, when he bagged the Oaks on January 24, 1998 in the colours of Dr Vijay Mallya.
“The win of Romantic Liaison in the Indian Oaks of 2006 was very dear to me. It was my first ‘Indian’ classic and a difficult ride. After winning the Calcutta 1000 Guineas, we finished runner-up to Desert Lightning in the 1000 Guineas at Mumbai. We were considered a long shot in the Indian Oaks at 7/1 but we beat the field hollow despite the filly hanging out in the straight.”
“The other win which brought me immense pleasure was astride Aboline in the Bangalore Summer Derby of 2009. I don’t think anyone expected us to beat Jacqueline on that day,” says a proud Christopher. He is also very serious about maintaining his riding-weight in the low fifties so that he can get rides aplenty without declaring any overweight. “I make it a point to visit the gym at least twice a week. I don’t much care for the sauna,” he quips.
While still struggling as an apprentice, Christopher wisely chose to marry his childhood sweetheart Lucinda. Today, he is a well settled young man with three beautiful kids – daughters Melissa and Nikita, and son Jayden. Champagne corks will no doubt be popping at his cosy Hastings flat (near the racecourse) this evening.
When asked whether his next target is 2,000 winners, Christopher says with a smile, “The career span of a leading professional rider rarely allows such an enormous target to be achieved, but who knows.” Yes, who knows indeed. Perhaps we shall see young Jayden in the saddle someday to carry on the legacy of the Alfords and reach that improbable target.
For the statistical minded, these vital statistics of C Alford ought to tell its own story.