She Came, She Saw, She Conquered 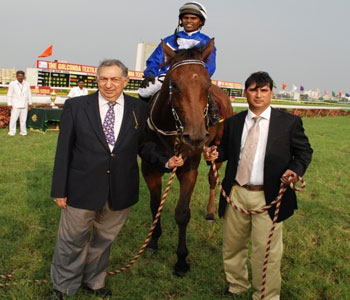 If it’s October 2nd then the who’s who of the twin cities head towards Malakpet, to witness the running of The Deccan Derby. This grade I race, run over a distance of 2,000 metres, was being held under with the ‘Golconda Textiles’ banner for the third consecutive year. The atmosphere at the race course was festive with the entire area decorated with flowers and temporary stands provided to accommodate the record crowd that throng on the day.
People from all walks of life had assembled in their best attire and the ladies, to make a special mention, in colourful dresses and accessories to match set everyone’s eye balls rolling. Amongst them, there was one, who stood out and her pristine elegance garnered all the attention. That was three year-old Xisca, daughter of China Visit. Having arrived for the big race just three days ago from Pune, Xisca showed no signs of fatigue and was one of the best turned out in the parade ring.
This year’s Deccan Derby attracted 15 contenders, three of them from the fairer sex. The other filly that ran with a chance was Darius Byramji-trained Ice Bound, who had finished a notable fourth in the Fillies Trial Stakes. The local lads of whom a ‘race’ was expected were Vijay Monarch, Rapture of Victory, Napoleon and Kohinoor Wish.
Going into the race, Youre an Aeton made the running in front followed by Da Xia, Deep Blue Sky, Rapture of Victory, Don Valentino, Kohinoor Wish, Power Colors, Airborne Magic, Ice Bound, Magic Million, Moheena, Napoleon, Xisca, Vijay Monarch and Arcturus, as the fifteen passed the seven furlongs. Approaching the final turn, Kohinoor Wish shot ahead with a sudden burst and started to stretch away from the rest. Rapture of Victory, Vijay Monarch started to match stride with Kohinoor Wish but the leader was kicking on with John on the saddle. B. Prakash on Xisca had by then improved and travelling widest of all showed a remarkable turn of foot, to overcome the long leeway Kohinoor Wish had established. The entire Grand Stand was up on their feet to applaud the terrific acceleration that Xisca put up in the final furlong of the race.
Xisca is the property of Ms. Christaline Glenn and Mr. Mehernosh Deboo, Rep. Aquarius Maritime Pvt. Ltd and Mr. & Mrs. K.N. Dhunjibhoy, Rep. Five Star Shipping Co. Pvt. Ltd. The filly is bred at Usha Stud by Greentree Stud and Agricultural Farm. Mr. Adi Nariellwala, representing the Five Star Shipping, received the Derby Trophy from Mr. Mohd. Alam Khan, Director, Golconda Textiles Pvt. Ltd.
Trainer Pesi Shroff had mentioned in the pre-race interview that he had full faith in Xisca’s staying capability. An elated Pesi after the race said, “In the last 400 metres I knew that my filly will make it.” B. Prakash, who is the only Indian jockey to have ridden over 2,000 winners, rode a composed race throughout. Speaking to Indiarace, Prakash said, “The filly is a very cool customer, she settled down well and on the straight I knew well that I would get Kohinoor Wish. I am very happy.” On his feat of completing 2,000 winners early this year he said, “It’s a nice feeling; I owe this success to Dr. M.A.M. Ramaswamy.”
Kohinoor Wish was definitely not disgraced by the loss; as a matter of fact, it was one of his best performances. With no support coming from the bloodline for staying prowess, the way Kohinoor Wish took the 2000-metre trip deserves all accolades. Trainer K.S.V. Prasad Raju in a chat with Indiarace said, “He is a top miler and was unlucky to lose the Colts, after interference. A better horse won the Derby and I don’t have any regrets. In fact, I am mighty thrilled by his performance today.”