Berlioz, a strong contender for Guineas 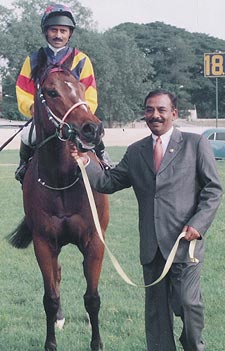 Berlioz’s facile win in the 1600 metres Shantiniketan Cup on Sunday should stand him in good stead when he lines up for the Bangalore 2000 Guineas next month. The Padmanabhan trainee beat a good quality of opposition en route to winning with great deal of ease. Though the field appeared to be closing in on at the finish, Berlioz had some reserve left. Berlioz was tending to ``loaf’’’ after he hit the front. What was impressive about the victory was the sparkling turn of foot displayed by the favourite at the turn after being held up in the mid-group for most part of the journey.
With Spectacular Quest under a cloud and the other frontline contenders heading to Mumbai, Berlioz could well be presented with an easy opportunity to land the plum. Full Speed is the horse every one has to beat but his preparation may be affected following an unfortunate fall of jockey Silva Storai in morning workouts which has resulted in her being rendered hors de combat for quite some time.
Berlioz went into the race at very cramped odds but considering his run in the Mysore Derby, such a price was justified. Malesh Narredu had Berlioz in the fifth or sixth position and gradually moved up on the wide outside to be in striking position at the final turn. When set alight, Berlioz quickened brilliantly and in a trice had gone clear of the field. Polar Force lacked the zip to quicken effectively and but he finished on strongly to edge out Chilli Girl for the runner-up spot. Jumping For Joy and Golden Fortune were close behind.
Imran Chisty’s luck in recent times appeared to be on the upswing but the jockey fell foul with the authorities for his questionable handling of Reach Out in the Sarb Kla Plate (Div I). Rank outsider Patrichian hit the front and stayed there resolutely to win by a narrow margin over Reach Out who was given a ``soft’’ ride by the jockey. Though Reach Out jumped out at the start from the wide outside draw, the filly recovered quickly to be well placed to strike, improving position without much effort. Reach Out came up with raking strides in the straight despite the jockey not going all out and lost by a whisker. The jockey did not use the whip even once and he could have justifiable reasons but his reluctance to put vigor into his effort is what went against him. His license has been withdrawn till the conclusion of the Bangalore Winter Season. It is a pity because the jockey had everything going for him and this setback is bound to affect his prospects greatly. Reach Out has been pretty unlucky and she is yet to find a jockey who would do justice to her potential. Dirham was a close third and B B Ahmed who rode the lesser fancied horse, too came in for similar treatment from the Stewards for taking things too easy. The lower division of the race went the way of Puttanna trained Show `N’ Tell who got strong home to edge out favourite Austin Powers with a measure of comfort.
A good touch failed to come off on Stilton who caught a tartar in the form of Forever Elegance. Sharpened by a mock race, Forever Elegance collared Stilton who was shaping like a winner, in the final furlong and won in impressive fashion. Stilton in turn was well ahead of favourite Supreme Power who lost steam after doing all the front-running. Stilton deserves another chance when he runs next time out unless the connections decide to run him in a graded race.
Chisty drove out Dr Pepper the way he is capable of to ensure victory for the five-year old mare in the Mount Joy Plate (Div II). Favourite Kandalla found foot late while Boonlay’s chances were affected by the saddle slipping from its place. The upper division of the race was claimed by Mohan Valavi’s Wild At Heart who won from end to end by a widening margin of over seven lengths over Beyond Limits and the rest. Alford who was astride Wild At Heart, had a double for the day as
earlier he had an arm chair ride to victory on Moment of Hope who swamped the opposition.
In the concluding ace of the day, Equally Good won at the expense of favourite Theodora quite comfortably. Apprentice Ashwin Rao was all over the place on Theodora who was a tame second. Court of Jewels served notice of an imminent success when finishing fourth despite a lackadaisical effort on the part of her jockey.