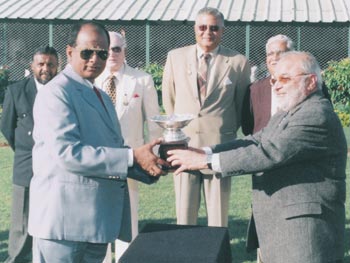 Pricewise’s emphatic victory in the Varada Cup, run over a mile, in Friday’s feature event, brings the daughter of Razeen into Guineas contention. The manner in which she accelerated after being up with the pace suggested that Pricewise has the class to excel at the top level. She is heading straight to Mumbai to take part in the Indian 1000 Guineas. Pricewise has surely made good progress since the summer season.
Trainer Ganapathy had always rated Pricewise quite high among the classic hopefuls in his yard and predictably the daughter of Razeen was quoted at cramped odds to win the mile long Varada Cup, a race for horses rated 30 to 45. Prakash raced Pricewise within striking reach of the front-runners and when asked to quicken inside the final furlong, the favourite stretched away to record a facile win in asmart time of one minute 39.30 seconds. Allectus rated too highly for comfort by the stable who had hoped to win the Mysore Derby with him, was a tame second, his pull in weights not helping him a great deal expect get the better of Alcindor for the runner-up slot.
Celtic Chief making a belated start owing to niggling problems swamped the opposition in great style to win the Half A crown Plate (Div II). Nuncio was chasing him into the straight but once the son of Burden of Proof picked up momentum, he was stranded. Celtic Chief, the stud farm’s nomination as one of the best from that year’s crop, should progress rapidly from now onwards considering the fact that he clocked an excellent timing of one minute 13.97 second without being unduly extended. Surely Celtic Chief would enjoy an extended trip notwithstanding the fact that his timing matches that of the top sprinters at this centre. Incidentally, the upper division of the race was clinched by Illusive Lady in a thriller fromCopper Bracelet in a relatively slow timing highlighting the difference between Celtic Chief and the rest who have been left behind in this class.
Srinath has always been a delight to watch because without doubt he is simply the best in the business. Unfortunately, he rarely has had an uninterrupted run. His power-packed effort on Randsberg ensured that the favourite came up with a second wind and retrieve lost ground and edge out Smart N Noble by a narrow margin. Randsberg’s strong point is his ability to stay longer trips and it is this which should help him come into Derby contention if he shows more improvement duringthe season. The fact that Randsberg was running after a long lay off enhances the quality of the win. Cannuaght Square’s poor effort served to highlight the fact that he is pretty ordinary. In fact, Bollinger put in a good effort, finishing third, coming from way behind.
Another fine effort by Srinath saw M P Mahaesh trained Gem squeak through a narrow and difficult passage along the rails to land the spoils in the B P Shiva Memorial Plate (Div I). Gem appeared to have been boxed along the rails with no hope of getting a clear run on the outside of him as the space was crowded. Srinath boldly persisted along the rails and Gem showed enough fighting qualities to take the gap and win with something to spare. Zimmerman was second ahead of Onetouch Toomuch. The lower division of therace went the way of North Berwick who won without any resistance from the opposition. Apprentice jockeyJagadeesh on Amber Prince clipped the eventual winnerat the top of the straight and was thrown off. Luckily, the apprentice escaped with only minor bruises.
Full sister to the Gr 1 Stayers’ Cup winner Bay of Angels, Scintillating Skill showed enough dash to win the six furlong Aswapriya Cup, a race for maiden two-year olds, in tremendous fashion. Cheryl, who was none too well placed, finished on purposefully. The daughter of Burden of Proof can recoup the lost money before long. In the day’s other action, Mohan Valavi’sInquisitive left the field stranded inside the final 100 metres to win as he pleased from the heavily supported No Opposition.