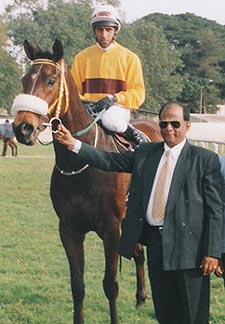 Ganapathy trained Elite Zone is on the upgrade and his emphatic victory in the 1400 metres Madras Race Club Cup, a race for horses rated 40 and above on Friday, was suggestive of the strides made by the son of Placerville during the monsoon campaign. Winner of the Deccan Derby in October, Elite Zone is one of the top three-year olds at this centre and he should make his presence felt in the 2000 Guineas.
Elite Zone went into the race as a cramped odds-on favourite and jockey Imran Chisty had no problems whatsoever in shaking off his rivals with ease. Elite Zone stretched away from his rivals with No Excuses being the surprise challenger. The reliable seven-year old gelding Augill Castle finished on to snatch the third spot ahead of his younger rivals. Winner of the Deccan Derby last year, Brown Sugar returned to the track after being sidelined by a tendon injury but he clearly needed this run.
Royal Strider, who had buckled down close home in his last start, came out of the maiden ranks with an easy win in the Beginners Plate, a race for first season runners. Siroco claimed the runner up spot with Galloping Bay dragging himself to the third place.
Michale Eshwer trained Starcent and Spark of Glory claimed both the divisions of the Taj Stud Plate. Starcent proved too good for the opposition in the upper division winning as she pleased. Starcent has indeed shown appreciable improvement since last seen in summer and she should progress further on the handicap scale. Spark of Glory held on to win from Emilio to clinch the lower division. Rubik continued to disappoint.
There was a big touch on Lokanath’s Bib B and the price on Great Seal drifted out in the ring. Big B won as a well backed horse should while Great Seal was never in the hunt, the son of Glory of Dancer having lost his sparkle since his last run.
Arjun Mangalorkar finally had a winner after two of his wards had lost due to poor handling. Itsmyday suffered no hiccups en route to a smashing win over Laughing Wild and the rest. Sardar Singh’s Madam Marina was backed strongly to win the Beloved Prince Plate and though the favourite was none too well placed at the top of the straight, a strong stretch run ensured a victory over Zhanna who was an eye-catching second. In the day’s other action, Royal Brackla came good, winning quite easily as Settle The Score put in only a half-hearted effort.