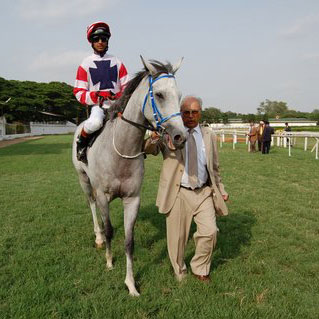 Zareer Darashah trained Real Magic (Gashwar-Gatling) justified the favouritism in the division I of the J.K.Van Ingen Memorial Gold Cup, the main race of Wednesday’s races at Mysore. The six year old grey from Zareer’s yard was backed down to ‘odds on’ favouritism among the eight runners who faced the starter. On entering the home stretch, Real Magic was in fifth position and travelling on the extreme outside. The rider P. Trevor just niggled her and the mare produced a fluent gallop to surge clear. Swiss Queen inched closer in a desperate bid towards the closing stages but Real Magic held on by a clear half length at the finish.

Trainer C.Girinath and jockey S.Shiva Kumar successfully combined to pull off a back to back double through Bullish Luck and Mr.Hurricane. Bullish Luck (Brave Act-Sea Gypsy) won the lower division of the J.K.Van Ingen Memorial Gold Cup, pulling away from Cute Style. The favourite Bullish Luck gave some anxious moments to her supporters while bracing the rear till approaching the final turn. Cute Style had set out on a start to finish mission and was well ahead of the rest on the straight. Bullish Luck was guided to take the shortest path by Shiva Kumar as the heads turned for home and quickly gained places on the home stretch. Raising a good gallop, Bullish Luck sped past Cute Style inside the last 200 metres and won with more on hand. Saratoga got closer to finish third behind Cute Style.

Mr Hurricane (Mr. Mellon-Cats Concert) flew in towards the closing stages to win the Karighatta Plate. Amber Star was in front from the start and looked good on entering the home stretch. Missiszippy and Sunshower were going all out to collar the leader and Mr Hurricane was looking to get clear through some traffic snarls 200 metres from home. As they were all getting bunched up, Mr Hurricane sported a pair of wings and flew away from the pack to register a fine win. Missiszippy finished second while Freedom Fighter and Visual Element filled the frame.

The day was dominated mainly by favourites and Pratap Kamath’s Miyarsprincess (Brave Act-Sea Spray) started the day, winning the Mysore Plate. Smartly out of the gates, Miyarsprincess raced in third till the top of the straight and surged ahead with 100 metres left from the finish. Virat tried hard to get to the ‘Princess’ but failed to catch up and finished second.

Dinesh Puja trained Spirituality (Alnasr Alwasheek-Azzilfi) just about managed to snatch the race from Infinithoughts on the last stride, much to the relief of a large number of supporters. Count Royal bowled along in front for a long time and Spirituality was in mid field, many lengths behind the leader. Infinithoughts who was tracking Count Royal, went to the front inside the last two furlongs and kept up the momentum. Spirituality moved under D.K.Ashish to bridge the leeway Infinithoughts had established, and with a sustained effort went past the winning post along with Infinithoughts. The magic eye went in favour of Spirituality. The favourite had managed to get her nose in front at the wire.

Vishal Yadav’s Noble Sacrifice (Brave Act-Restore) responded gamely to apprentice Ajeet Kumar’s urgings and got the better of Rashida to win the Trombay Plate, the concluding race of the day. Thriller finished third, ahead of Behram.