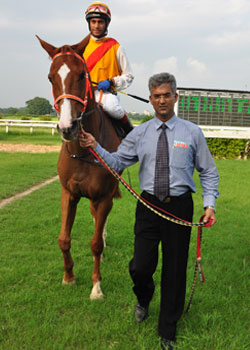 It was yet another afternoon of woes at the Calcutta racecourse on Wednesday when only a single public choice in the form of Star Symphony occupied the winner’s enclosure.

Jockey Trevor Patel rode a power-packed finish on the Bharath Singh ward to get the better of Hall Of Glory near the winning post. The property of Mr RK Wadhawan and Waryam Singh thus recorded his fourth successive win and fifth from six starts at this centre. Great stuff indeed for the five-year-old by Placerville out of Symphony of Sire.

Christopher Alford on Hall Of Glory looked to have the Supernova Cup wrapped up after shooting into the lead near the distance post but Trevor is not one to give up easily and his persistence paid off.

Trevor thus completed a brace after having enjoyed a fairly easy ride on Ice Fantasy earlier in the day. The chestnut daughter of Hurricane Run out of Landmine is also under the care of Bharath Singh and ran in the same colours as Star Symphony. The favourite in the race, Roman Centurion, was slowly out of the gates as he is wont to do and never looked threatening at any point in the race. The winner was available at 4/1.

Good One (Gaswar-Free Hit) was anything but good for punters as the 20/1 shot from Shafiq Khan’s stable showed a clean par of heels to the half-money favourite Calypso Girl and Saisoku. Jockey Afzal Khan enjoyed the luxury of peeping over his shoulder near home.

Trainer Vikash Jaiswal and his patron Rishi Anand pulled off another superb gamble of the season with Alacrity who got the better of runaway Elusive Thought close home over the 1000-metre sprint. Top-weight rider S John had to use the stick relentlessly to get the six-year-old to raise a winning gallop. It was a gutsy gamble as the trip was a little sharp for the top-weight. The on-money favourite Songwriter failed to collar the runaway front-runner and finished a tame third.

Jockey Christopher Alford notched up a much needed win when he piloted Vijay Singh-trained Aerator (Oath-Liquid Gold) to a seven-length triumph over Gods Creation in the As Ever Handicap. The favourite Welcome Smile appeared to be sluggish and finished on third. Barring this trio, the rest of the field used  the race as a track-trial and their runs may be ignored.

The short card of six races produced the season’s biggest shocker in the form of Sky Glider (Puerto Madero-Pure Cream) in the day’s final event. Leap-year jockey Kishore Kadam decided to put his best foot forward when he realised his mount was raising a gallop. Trainer Deepak Karki thus opened his account for the season. The race however had a story to tell.

The ante-post betting reduced the  odds of recent import Super Hero to half-money. The Javed Khan ward with Shailesh Shinde astride was the rage of the ring as punters felt things were looking up after Star Symphony’s narrow victory. The colt by Al Nasr Alwasheek out of Thanks A Lot shot out of the gates like a scalded cat but was soon held in check by Shinde as speedy Memories came in from an outside draw and took up the running. With 100 metres to go, she seemed well and truly home, but alas, as in the case of Elusive Thought, she too started shortening her strides. Super Hero collared her with 50 metres to go but dramatically fell to the fast-finishing Sky Glider in the final 20 metres.