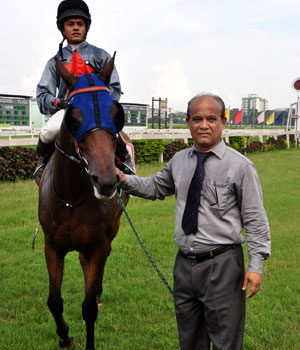 Trainer Jasbir Singh was in his element at the Calcutta racecourse on Tuesday as he led in a high-priced hat-trick at the cost of well-backed favourites. Punters took a beating for the third consecutive race-day as unfancied runners enjoyed supremacy and ensured that the Jackpot was carried over by the fourth leg.

Among the few who were happy with the results were the Nakul Stud Farm owners where Don Micheletto stands. Though the filly Mistletoe failed, her six-year-old full-brother Aamar Kaku (Don Micheletto-Power Of Commitment) came with a stunning run in the straight to peg back the heavily gambled Star Of Roses who was on the verge of obliging his backers in the race for the Swatantrata Handicap. While jockey Shailesh Shinde timed his run to perfection, the disappointment in the race was Dance In China who finished in the ruck after displaying some early speed.

The afternoon commenced with Jasbir Singh-trained Successful (Don Micheletto-Raj Shahi) making the Stay In Shape Handicap a start-to-finish affair despite drifting out to the outer rails. The favourite Vence appeared to be outpaced as her top-weight may have been bothering her. Ebony Princess continued to play bridesmaid.

Jasbir’s next winner was the self-owned three-year-old Shivalik Shakti (Rebuttal-Sopran Cini) who got the better of the favourite Declared Asset close home. The other fancied runner Green Pasture was never in it. Though available at 8/1, the winner was very much in reckoning as he has finished second to runaway Kuan Yin. As he ran in his own age group on this day, he turned out to be the only three-year-old to win on Tuesday. Jockey M. Krishna steadied the gelding a hundred metres from home as he drifted out a little under the whip, when at the tail of the front-running Declared Asset.

Among the casualties of the afternoon were trainer Vijay Singh’s string of youngsters. Fashionably bred Astylar (Razeen-Colourpresentation) could not have run a worse race in the Fairy Heights Handicap. He was being pushed and whipped by Rawal within a furlong of the start but failed to improve his position. Several track reporters were baffled by his show as he was excelling in the morning workouts. In contrast, Mistletoe ran a forward race before fading out. Neatly handicapped Vaani (International-Rock Opera) from Jasbir Singh’s yard completed the hat-trick for the trainer as Mohit Singh brought the filly with a fluent run in the straight, well clear of Pine Valley. Jasbir’s owner HS Gill led in a double.

Trainer Javed Khan, whose Aamar Kaku won the fourth race, continued with another high-priced winner Exxin (Sussex-Fine Glance) in the Pentagon Cup. Shailesh Shinde too completed a brace as he piloted Exxin to a regular win over favourite Atwater and Wild Card. After a tardy start, Atwater improved somewhat but that’s where his story ended. While there’s no doubt that the debacle of these youngsters left punters that much poorer, it is also a fact that these runners will be better off after their lung-openers and need to be watched carefully as the season gets older.

Patrick Quinn’s Alicante (Senure-Red Alert) was withdrawn at the gates on her last entry. Though running in a far stronger field here, she had no problem hitting the front and staying there all the way, ahead of the fancied trio of three-year-olds – Azorian, Burst Of Stardust and Fragrance. The first named was possibly the best of the beaten brigade. Rithambhra occupied the runner-up berth for the third successive day.