Blue Hare gets his due 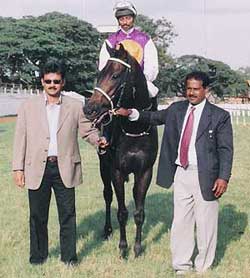 Blue Hare, rousing performer as a juvenile, had fallen on bad days, with physical problems coming in the way of him realizing his full potential. However, after being cast off and given to trainer Md Khan, Blue Hare had run some fine races giving hope of imminent success but never fulfilling that promise. However, Thursday was the day of reckoning for the six-year old son of Brave Hunter as he put his best foot forward in the hands of Appu and edged out Star Alone in a close duel in the Bakshi Arepur Basappaji Urs Memorial Gold Cup (Div I), the feature event of the day’s races. The lower division of the race went the way of Loknath trained Dancer’s Quiz who recorded a hat-trick of wins after a poor start.

Star Alone was expected to have a decisive show but after shaping like a winner in the final furlong, he was beaten by Blue Hare who powered home. Siberean, the first favourite, expended all his energies in hitting the front where Al Habib continuously harried him. The effort told on Sibrean who weakened during the final stages of the race. Crow Wood was expected to have it easy in the lower division but the Darashah ward went down tamely as Dancer’z Quiz managed to edge out Viking Victor. Dancer’s Quiz did not take a good start and jockey Ryan Marshall had to whip the five-year old mare a couple of times to get her going. But once she got into her stride, she fought out resolutely and landed the spoils at nourishing odds.

Trust a favourite ridden by Malesh Narredu to run into one problem or the other. Allectus was a good thing beaten because the jockey gave too much to do in the straight ostensibly because the slow pace of the race dictated by the eventual winner Lanark prevented him from taking a striking position. Allectus lost a good position despite a favourable draw as Lanark, drawn on the wide outside, moved up smoothly to take over the running. Allectus was reportedly cramped for space and by the time, Malesh dragged out the favourite to race him on the wide outside, Lanark had established a winning lead. Simply Amazing ran on to finish third. This was in the upper divison of the Bookmakers Gold Trophy. The lower division however ran true to form, with Romantic Fire, back after a setback had kept him out of action for a few months, win in taking style. Romantic Fire simply left the field standing at the top of the straight to record a smashing win.

There was big support for Samar Singh trained Initiation but the son of Twist And Turn who fought for his head in the early part, was a spent force when the runners took the final turn. Relishing the fast pace of the race, Ponte Romano came through with a powerful run inside the final furlong to win capably from Bollinger who found foot late. Bollinger lost some ground around the place the false rails started due to the interference caused by Shabuddin on Fortunate Knight.

Robert Foley’s Royal Park recorded a hard fought win over Smart Show in the day’s opener while Suraj Narredu drove out Top Cat to a successful start to finish win in the RRR Gold Trophy. Top Cat bolted to the front at the start of the nine furlong race and caught everyone napping including favourite Esperante who was left with the futile task of chasing the front runner who had been too much leeway.