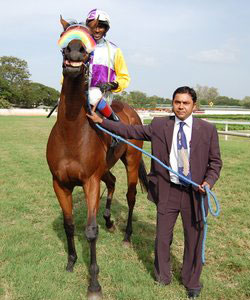 A long and winding card of eleven events was conducted at The Mysore Race Club on Friday. The FK Irani Memorial Cup, held in the memory of a popular Chairman of the Club, happened to be the day’s feature. It was a seven furlong handicap for horses in the highest category. With eleven runners electing to face the starter, this race had a fairly “open” look. Spark Of Silver, Shivalik Prince, Love Conquers All and Talisker  were equally fancied by their respective connections. Since many of them had raced against each other in the past, it was easy to realize that they were closely matched. Shivalik Prince was the best performed amongst this group. After a string of victories in recent months, he had lost in a close finish to Indian Bolt at Bangalore. With Indian Bolt successfully defying a winning penalty, and subsequently scoring in “graded company” at Mysore, Shivalik Prince had the best credentials. However, he had blotted his copybook with a poor show in his only run on the local track. Since he had worked well and was running after a fortnight, it was felt that he could possibly redeem his reputation. Atlantus was another contender that had the ability to score in this set, but his top weight was a definite stopper. Bottom-weighted Demanding Format’s second behind Dancing Touch was a fair effort, but the filly was yet to make a mark at the highest level.

Barring Ashkan, the other runners took off to a level start. Iron Marshall, Hurricane Bay and Flaming Arrow showed early intent and set a strong pace in this race. Spark Of Silver, Shivalik Prince and Demanding Format raced comfortably in mid group, while Atlantus graced the rear. The runners raced in same order till the top of the straight. It was at this stage that they began to bunch up. Neeraj Rawal brought Spark Of Silver with a flourish through the middle and tried to wrest the initiative. Shivalik Prince ducked towards the inner rails and strode towards the winning post. But the ones that moved the best at this point were Demanding Format and Atlantus. Vaibhav put Demanding Format under pressure and asked her for an effort. The filly quickened nicely and took over the running. Atlantus made a feeble bid on the very wide outside to take the second place ahead of a tired pair of Spark of Silver and Shivalik Prince. Trainer Vishal Yadav has done very well with Demanding Format. This was her third victory in as many months.

Young Vaibhav had another success with Dhariwal’s Current Ray. The Ranga Mysore Race Trophy, a sprint handicap for runners in class II, had a number of fancied acceptors. Thoughts N Actions, Lads Gladiator, and Superb Style dominated the action in the bookmakers ring. Current Ray had been disappointing her fans with some lacklustre performances this year. She would either be lethargic at the gates, or get caught up in traffic jams in the straight. However, there were no such problems today. Current Ray took an even start and progressed smoothly thereafter. Vaibhav gave her a comfortable ride and urged her in the straight. Weaving her way through a difficult passage, she strode away from Thoughts N Actions and  Superb Style . Now that she has re-discovered her winning ways, one can expect Current Ray to defy the handicapper.

Leading jockey PS Chouhan was seen at his usual best while scoring a popular treble on Friday. He began the day by steering Pratap Kamath’s Heavenely Divas to a facile victory. The three year old had failed on a number of occasions in maiden company, and her trainer had chosen to run this filly at her own mark today. Even though she was saddled with a back-breaking impost, the quality of her opposition was so poor that it enthused the punters to back her down to even-money favouritism. Tracking Small Made for a while, Chouhan gave her a nudge at the bend. Heavenly Divas stretched out beautifully to go away from Blues And Royals and a late finishing Freedom Fighter. There is little doubt that that the winner will win amongst Mysore based horses on promotion.


Chouhan had to use all his skills while goading Neil Darashah’s Spaniard to a narrow victory over a runaway Entertainer in a nine furlong handicap for horses rated 40-65. Spaniard has a habit of veering out in the straight and he did exactly the same thing in this race. In fact he had lost a race in the Stewards Room at Bangalore because of this unruly behaviour. Suraj took Entertainer to the front and made all the running. He hugged the rails and was a couple of lengths clear at the bend. Spaniard improved steadily and challenged on the wide outside.  It was really difficult to take a call on the final result as the two of them were far apart. However, to the delight of his numerous backers, hot favourite Spaniard got up in time to beat Entertainer near the finishing line. Well fancied Sandstorm clearly failed to stay the trip and faded from the scene.

Chouhan and Neil won another race in controversial circumstances. Public choice Neron had failed to hold Little Lion in the straight and got beaten by a whisker in The Chettinad Stud Gold Cup. Jockey Afsar Khan’s limited abilities astride the winner led to such a close finish. Since the two of them had raced close to each other in the final furlong, Chouhan decided to take his chances by lodging an objection. Most of those present at the course were intrigued by this scenario. However, the Stipes and the Stewards found merit in the charge that the winner had hampered Neron’s progress. After long deliberations, wherein the opinions were divided, they decided to award  the race to Neron. Chouhan’s ability to put up a convincing case before the authorities seemed to have swung the verdict in his favour.

Immediately after the victory of Heavenly Divas, Pratap Kamath saddled Always Inspiring to a surprising victory. The grey filly had failed in a handicap event exactly a week ago, and was now competing against some well performed maidens at level weights. With money flowing in the direction of Simpleton, Knowledge and Abbas Dream, Always Inspiring was a rank outsider. Janardhan Paswan took her to the front and stayed there. Wandering Ways and Simpleton raced close behind in single file. With all three coming under the stick in the straight, the scene remained unaltered. Always Inspiring had shown a tendency to drift out in her previous start, but she ran straight today. She passed the winning post a couple of lengths clear of Wandering Ways and Simpleton. Knowledge performed pathetically to end a poor fourth.

Trainer Sharat Kumar and Christopher succeeded in performing the opening and closing ceremonies on Friday. While the well supported Style Of Signature began the day by scoring a maiden victory amongst horses in the lowest category, it was left to Ground Marshal to put it across a bunch of fancied runners in the last race of the day. Both  these winners recieved able assistance from the saddle. After I Fancy You shot her bolt near the bend, and Shades Of Scarlet made heavy weather of overtaking her, we saw Style Of Signature making steady progress on the wide outside. The four year old responded to the stick and managed to retain his narrow advantage till the very end. Noughtsandcrosses appeared late to take the third spot. This filly has been running consistently over the last couple of months, and it may not be long before she scores an overdue success.

Impressive Bolt and Smart Star seemed to have the best chance to win the concluding race of the afternoon. This  pair of three year olds were known to possess a lot of speed and the two of them dominated the betting action in a sprint for runners in Class III.. With A Move To Remember rocketing to the front and setting a strong pace ahead of Impressive Bolt and Smart Star, Christopher was happy to wait with Ground Marshal. He saved ground by staying close to the inner rails and made his move after straightening for home. Joining Impressive Bolt near the distance post, he got stronger near the finishing line. Those who had noticed Ground Marshal’s performance while ending a fair second behind Mr Carpe and supported him today, were benefited by their decision. Smart Star and Jazzbytheway filled up the rest of the space on the result boards.

The upper division of the above race was easily captured by Nityanand’s Decorated. After a couple of second placed efforts during summer, the filly was making her seasonal debut. Known for her late acceleration, Decorated was held back behind a bunch of speedy horses. Scenic Blast, Living Legend and Esoterical fought for an early advantage and cut pace with each other. Top-weighted Forthcoming lost all his chances by losing a lot of ground at the start. With the front-runners getting tired in the straight, the stage was set for Decorated. The four year old made smooth progress through the pack, and under the guidance of Milan, scored one of the easiest victories of the afternoon. Unfencied Sunday Cruz made a late bid to take the runner-up berth ahead of a tired Scenic Blast.