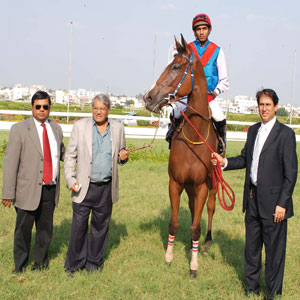 L.D’Silva trained Bloody Mary (Mr.Mellon-Cats Concert) was ridden by Kuldeep Singh to a well earned victory in the Raja R.J.K.Ranga Rao Memorial Cup which featured the day’s races at Hyderabad on Saturday. Running for the first time in this season, Bloody Mary showed her return to form by getting the better of Precisely That on the last stride. Into the final furlong, Precisely That rushed to the front. Apprentice Kuldeep Singh got busy on Bloody Mary and the filly creeped up to the leader and after a ding-dong battle right through the last 100 metres, put her nose in front at the wire.

Another of D’Silva’s ward, Big Boss (Don Machiletto-Shades of Beauty), won the Camino Cup, a 1600 metres trip, the only other trophy race of  the day. The 3 year old bay gelding from trainer Leo’s yard had earned its first win early this season but was neglected in the betting and paid a big dividend of Rs.138 for a fiver. The ten runners in the race were off to a level start and the favourite Okai Okai Okai took the mantle of leading the field early and close behind, on its heels was Big Boss, while Allendale tracked in third. Mid way up the straight, apprentice P.Sai Kumar started to work his way on Big Boss and the gelding responded readily to surge ahead with a fluent gallop to win with ease. Okai Okai Okai finished on being second, while August Kranti and True Friend filled the frame.

Apprentice P.Sai Kumar also registered a double, having ridden K.S.V.Prasad Raju’s Phenomenal Speed (Sussex-Osprey) to a powerful win in the P.Antony Memorial Plate. Phenomenal Speed whose last win was over a year ago had indicated her return to form when she finished an impressive third in her previous run, three weeks earlier. The filly

received strong support and was sent into the race as the firm favourite. After tracking Part Time Lover till the distance post, Phenomenal Speed stepped up momentum and sped past to win. Chayanandan warmed up late to finish second ahead of Part Time Lover.

Laxman Singh trained Front Line (Ikhtyar-Safe Haven) was taken on a start to finish mission by apprentice Harinder Singh over 2000 metres in the Candy Man Plate and successfully held on after being strongly challenged by Laurel Canyon right through the last furlong. Westminister rallied on to finish a close third.

The 5 year old chestnut gelding Maximum Response (Ikhtyar-Lucina) from L.V.R.Deshmukh’s stables, who had remained a maiden, even after nineteen runs, finally came with a big run down the straight to register his first win, in the higher division of the Top Most Plate. Zenas was the one who went ahead to lead the field, early in the race

and came into the home stretch well clear of the rest. Maximum Response was toiling hard at the wrong end of the field till the last 600 metres and gradually started to work his way, to be in about seventh or eighth rounding the final bend. On entering the home stretch, Zenas came in first with a sizable leeway but Maximum Response galloped resolutely under Arvind Joshi to bridge the gap and sizzled past in the last few strides to register his first ever victory. Montego Bay rallied late to deny the runner-up berth to Zenas.

Deshmukh’s Racing Queen (Alnasr Alwasheek) picked up her second straight win within a gap of ten days. Racing Queen was easily in front when the eight horses took off for the Prince Regent Plate. Rajkumar took the initiative passing the 1000 metres marker and went past Racing Queen to lead. Jockey P.S.Chouhan decided against fighting for the head and settled Racing Queen to run second. On the home stretch, Rajkumar started to shorten its strides and that’s when Racing Queen surged ahead and galloped freely to win by a big margin. Prince of Arabia was the best of the rest to take the second place.

M.Sathyanarayana trained Girnar (Oath-Shadow Dancing) pulled off a win in the lower division of the Top Most Plate. Girnar was taken to the front from the start by jockey M.F.Ali Khan and 4 year old was beginning to improve further on entering the straight. Art Ace began to raise a challenge in the last 200 metres while India One was getting closer from behind. The three were getting closer and were heading for a cluster finish. Although India One was the fastest finishing towards the closing stages, he managed to get Art Ace but failed to collar Girnar.