It Was A Rainy Season With A ‘Silver’ Lining 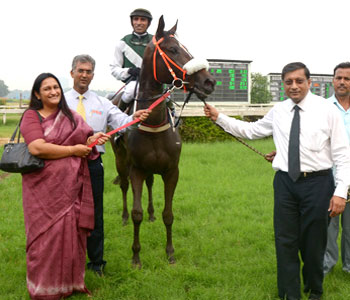 Every Monsoon meeting throws up a shocker or two, but this year had more than its share of surprises. What with the repeated failures of the red-and-gold runners, the suspension of the reigning monsoon champion trainer due to a horse-switch, an altogether new champion schooler and leading owner, a splendid Derby-winning filly, the largest totalisator collection of a Monsoon Derby day, a surfeit of photo-finishes and what have you !

Well, first things first, and that brings us straight away to the highlight of the season – The Monsoon Derby. Though this classy event lacked a sponsor, nevertheless the prize-money was extremely attractive as the winner took home close to Rs 40 lakh from the total package of Rs 67 lakh.

The stage was set for one of the most competitive and open Monsoon Derbies in recent years. The weather was pleasant and the track conditions were excellent. One thing was sure, the elements would not feature in any hard-luck post-race stories. But frankly, there were none. It was a true-run Derby and the best horse came out and won, as simple as that.

The seven-horse field had an abundance of quality horse flesh – which is what made this year’s event very special. The five colts and two fillies lined up at 3.35pm on October 6, with the colt Slade Valley closing as the piping hot favourite at 13/10 by virtue of his Colts Trial Stakes victory. Malpensa, Angel Child and Snowscape were available at 6/1 while the filly Silverina closed at 12/1. It was “write your own card” for the other two (Impressive Move and Alderson).

Rather surprisingly, it was the grey Malpensa who shot into the lead with Impressive Move at his tail and this leading pair were followed several lengths behind by Angel Child, Alderson, Slade Valley, Silverina, and Snowscape. Malpensa was galloping impressively and setting a good pace and the order remained virtually the same till the 800 metres marker where the favourite Slade Valley moved up while Alderson was finding the company a little out of his league and gradually dropping out of it.

Meanwhile, the wily and experienced Christopher Alford was gradually improving his mount Snowscape to be ready for the final assault at the top of the straight. Chouhan atop Silverina must have listened to his sixth sense and opted for the inside, but a little away from the rails.

As Malpensa brought the field into the straight, it seemed that Silverina was hopelessly pocketed as there were a wall of four runners directly in front of her – Impressive Move, Angel Child, Slade Valley and Snowscape. The last named was in full flow on the outside. At that very point, Slade Valley and Impressive Move started to drop out of contention. In a trice Chouhan had seized the opportunity and guided the filly through a slot between Angel Child and Snowscape. The latter failed to stay after the distance post while the other three went hell for leather in the final 100 metres before Silverina – powered by her superior dam lineage - eventually pulled away. The rest is history.

An elated owner Joydeep Datta Gupta led in his prized possession and pocketed a winner’s purse of nearly Rs 40 lakh. The champagne was to flow later to cap a champagne performance from a light framed yet gritty filly who has been maintained in peak condition by champion trainer Bharath Singh.

Derby-day also turned out to be a red-letter occasion for trainer Manvendra Singh who led in his maiden winner Candle In The Wind in the Great Tribute Cup, and later followed it up with another – Arabica. Both runners were piloted by the reliable Trevor Patel and are owned by Dr Vijay Mallya.

Reigning monsoon champion trainer Vikash Jaiswal started the season with a bang but the supposed hat-trick on the opening day was later reduced to a double as it was detected that one of the horses which won was not Harness Free but Quentin Derward. Both these runners were subsequently disqualified from all their races during the season. Things took an ugly turn for Jaiswal after the matter came to light in August and an enquiry was ordered. The trainer was suspended four race-days which included Derby day and Monsoon Cup day.

What probably saved Jaiswal from a stiffer penalty was the fact that on the day Harness Free was supposed to have won, the actual winner Quentin Derward was rated lower than him. The other point that went in his favour was that these two horses were under the care of John Stephens who passed away in April. After that they were transferred to Jaiswal’s stable and he was not very familiar them.

While there may have been a few negative issues during the 23-day meeting, by and large it was a rainy season which provided a silver lining for many apart from the connections of ‘Silverina’. For one, it signaled the re-entry of last season’s champion colt Dandified, into the centre’s ‘top drawer’ bracket.

The Calcutta punters cheered all the way as their dethroned local hero Dandified made a smashing comeback to lift the Tangiers Cup at cruising speed. His closest rival Bold Police was badly outclassed after the turning for home. However, the presence of the south India challenger did ensure a fairly good price for the Rebuttal-Dandoona colt who was available at even-money. As expected, the pace of Accurate was scorching and Christopher Alford atop the favourite bided his time in fourth slot and waited for the pacemaker to shorten his strides. Thereafter, his mount smoothly took over the running in the straight for a delectable start to his monsoon campaign. Dandified subsequently picked up two more races but failed to bag the “horse of the season” title.

That honour went to the four-year-old Amaretto from Arti Doctor’s yard who went from the top of Class III to the highest category without too much exertion. He ran his last race of the season with a rating of 101 and finished third to owner-mate Bullet.

While Dandified did trainer Vijay Singh proud, his three-year-old colt Snowscape was somewhat of a disappointment. However, the fashionably bred colt will be worth following during the winter meeting as he appeared to be coming into his own near the fag end of the rainy season. Quite a few runners from the powerful red-and-gold yard of Vijay Singh failed to hoist a winning flag and will be a likely threat during the season ahead.

The handicapper HA Virani did a steady job throughout the season and this ensured a string of close finishes which kept punters on their toes.

Vice-president racing Robin Corner was a satisfied man at the end of the monsoon meeting. “ The competitive nature of racing this season augurs well for the centre as outstation stables will now be convinced that racing is fair here and their wards will have as good a chance of picking up stake money as local runners ,” was Corner’s observation.

The ace rider of the seventies and eighties with a string of records to his name, was however critical of the standard of horsemanship at this centre and mentioned that there is much scope for improvement. In this context, readers may be informed that jockey coach Nicky Bird has been replaced by Philip Alford.

One promising apprentice who suffered an accident off the track but made a welcome comeback with a brace on the final afternoon was Babu Singh. Couple of other lads who rode purposefully were Zarar Alaam and Ajoy Roy. Among the unsung schoolers who have done pretty well for themselves are the names of Patrick Quinn, Jasbir Singh and Christopher Gleich. The first-named among that trio seems destined for big time under the aegis of the powerful RKW stable of western India. One man who did not live up to his potential was HS Bath and his wards may be worth keeping an eye on during the forthcoming winter meet.

The GM Racing and Clerk-of-the-course Amit Chaturvedi played an active role in ensuring that the monsoon track ran true to form and most of the professionals were all too happy with it. Though the winter meet commences within 12 days of the conclusion of the monsoon season, Chaturvedi is more than confident that the track will be ready for hoof-beats on the opening day. “Just as an insurance policy, I will be keeping the monsoon track ready for the opener as well,” he added.

The vast experience of RK Chaturvedi was a boon at the starting gates and it was a welcome change to see that runners were not held up because of a single unruly character who didn’t want to go to office. The prompt withdrawals at the gates ensured fluidity of track-action and fairness to those already stalled. Further, the Stipes called for mock races and gate practices before such a runner could be entered again. This is an important practice as it maintains punctuality and discipline during the running of the races.

Last but not the least,  it was a treat to listen to the centre’s promising young commentator Anit Casyab whose calling during most the major events including the Derby was both magnetic and commendable. He was well supported by former RCTC chairman Cyrus Madan whose passion for the sport ensured his presence every now and then in the commentator’s box. Fortunately so, as his popularity in this role stretches to far corners of the country.