Parmar Stole The Show With Treble 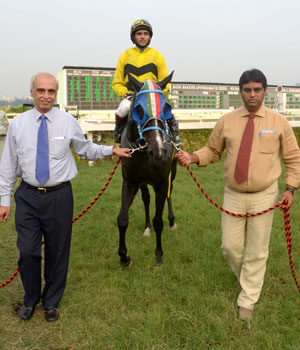 Though early in the season, racing was by and large form-oriented with punters and satchel-bearers sharing the spoils. The light drizzle had stopped and the cool climate encouraged the participants to give off their best.

Jockey NS Parmar stole the show with a laborious, if not spectacular, treble. Though his riding may have been a trifle scruffy at times, the important thing is that he got the job done, which is what matters. Parmar started his afternoon with a regulation ride astride Shafiq Khan-trained Stupid Cupid in the mile race for The Voluntary Handicap. The gelding (Epicentre-On the Trial) made every post a winning one, quite easily staving off the challenge of tote favourite Devil In Disguise. The rest of the five-horse field were never in it.

Pesi Shroff-trained Coppelia (Noverre-Patricia) was Parmar’s next winner. Though the filly’s odds expanded to 13/10, she won easier than expected, as the quietly fancied What A Feeling faded out after an early show of speed. He was running after a long lay-off and obviously needs a little time to get into the groove. Parmar appeared to lose control atop the winner after the turning for home and she gradually drifted out to the outer rails. In the process, she crossed the path of Sokudo and inconvenienced him. Otherwise, he would have been nearer at the finish. He will be worth keeping an eye on in the near future, as will be Atwater whose first run in this category is sure to bring him on.

Parmar completed his lucrative treble in the race for the Mysore Race Club Cup, with Shafiq Khan’s Shershah (Epicentre-Achernar) who won well despite losing some ground at the start and facing a few early traffic hurdles. The property of Mr Rustom E Daroga displayed a quick turn of foot once he was shown daylight by his rider, while his nearest rival Poles Apart lacked acceleration at a crucial juncture.

Trainer Javed Khan was not to be left out of the party and he too completed a brace with Vence (7/1) and Apache Gold (8/1). The former, a six year old by Puerto Madero out of Countess Margo, was well in at weights and the presence of apprentice Ajoy Roy further enhanced the chances of this forward runner. The apprentice had lost out to Bhima narrowly when he rode the same horse last winter. On this occasion, he made no mistake, as he tracked the course favourite Seachange till the straight before bidding adios. Gonna Be A Rockstar with C.Alford appeared to be the only serious threat in the straight.

Apache Gold’s win was somewhat of a bolt from the blue as the four year old by Black Cash out of Le Reve was taking to the race track after almost 10 months. The course favourite Fragrance was a creditable runner-up but was surprised by Md Islam on the eventual winner who was galloping strongly on the wide outside.

The two favourites who brought relief to punters were Irish Connection and Lord Aragon. The former, a Daniel David trained filly by Mathematician out of Eros Royal Bell, showed that the heavy impost was no deterrent for her as she quite easily accounted for Shivalik Shakti who made a brave effort despite taking the turn wide. The one for the notebook is Happy Princess who gave the two youngsters a run for their money.

Jasbir Singh-trained Lord Aragon (Mohit Singh up) won in a similar fashion to his earlier triumph. The gelding by Ivory Touch out of Oh So Quick issued his belated challenge on the wide outside to peg back Songstress with win-less apprentice Kishen Singh astride. The latter had taken over the running from Memories in the straight.

Jasbir however produced an ace up his sleeve when his five-year-old Royal Saga got the better of several youngsters to win the last race of the day. Heavily gambled Hurricane Star, who had missed the bus last time out due to a saddle-slip, finished in the ruck. In this game of pros and cons, opportunities are few and far between, and if not grabbed, the wait for the next ‘knock’ on the door can be agonising.

Stand Apart was the only three-year-old to show any kind of determination and should have pocketed this race by all logical count. But alas, in the sport of thoroughbred racing, logic is at times relegated to the backseat. Royal Saga completed a brace for Mohit and fetched a jackpot worth Rs 5.46 lakh for a single ticket holder!