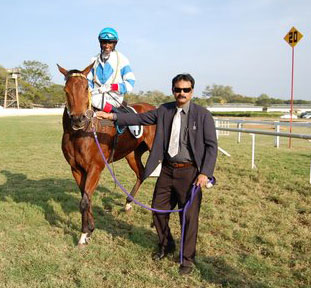 C.D.Monnappa trained Lotus Pond (Juniper-Loving Girl)scored a convincing victory in the Dr. M.N.Doreswamy Memorial Cup, which was the main event of Wednesday’s races at Mysore.  Jockey R. Vaibhav settled Lotus Pond well to be in touch with the front bunch till the bend and started to move up steadily. With about 300 metres left from home Lotus Pond took charge and kicked on well till the finish. Legal Knight was up with a challenge inside the last furlong but could not get to the winner and ended up second. Brave Assault and Impedimenta filled the frame in that order while Tusker tired out to finish fifth. Trainer Micheal Eshwer and jockey D.K.Ashish teamed up to pull off a back to back double.

Iron Marshall (Placerville-Rivage) outclassed its five opponents in the Christmas Plate, a seven furlongs trip for horses rated 80 and above. Absolutely Reality led the field, followed by Ashkan, Iron Marshall, Gazaki, Rising Rainbow and Scholar. The same rider followed till almost the final bend with just about two lengths covering the field. On the home stretch, Iron Marshall moved strongly and went ahead midway and stretched out easily to extend the margin of victory. Scholar weaved through horses to finish a notable second. Gazaki and Rising Rainbow finished third and fourth respectively.

The first win was on Duma (Phoenix Tower-Firecrest) in the opener, the Bird Sanctuary Plate, a six furlongs sprint for two year olds. Duma, a  winner on debut, raced in about fourth till the bend, moved up to be second behind Rickety Rock on top of the straight, stepped up momentum to surge ahead inside the last 250 metres and drew clear. Black Dragon Pepper King and Rickety Rock filled the frame.

Zareer Darashah trained Lad Lady (Razeen-Tarnished Lady) registered a win after a year, in the Suvarnavathy Plate. Money Bay, who had won two races in a row, was sent into the race as the favourite in a field of eight runners. River Gem set out in front, followed by Bucethalis and Lad Lady. As the race got to a boil, Lad Lady took the path along the inside and Thriller started to come up with a strong challenge on the outside. The two fought out every inch of the last 100 metres and went past the winning post locked together. Lad Lady got the nod by a whisker. Formidable finished on to be third. The favourite Money Bay never showed any zest and finished off the board.

The other professional to score a double was trainer Santosh Rao, who led in Voice of India and Amiable Lady. The 7 year old Voice of India (Libor-Fabulously Bold) raised a terrific turn of foot to win the Taj Mahal Plate. Racing towards the rear till the final bend, Voice of India took the shortest way as they rounded the turn to move quickly into third position. Into the final furlong, Afsar Khan pulled out Voice of India away from the rails and when urged, devoured ground to shoot past Big Hero and What A Warrior. Spandau Ballet and Glitterato moved in late to take the second and third spot respectively.

Amiable Lady (Sir Bordeaux-Northern Flower) won the Rajendra Vilas Plate under Himanshu. The 6 year old had finished third in its last outing after a forward run all the way into the home stretch. Jumping out from an outward draw, Amiable Lady moved quickly towards the inside and ridden in check in third. Into the final run, Himanshu started to work his way and the ‘Lady’ responded readily to surge ahead and kick on. Magnifique came from behind to finish second, in front of Rock All.

P.C.Tejaswi trained Born To Perform (Mischevious Music-Rising Phoenix), who had finished second to Southern Pearl as a favourite in its last outing, made amends to win the Pertigalete Plate. Racing towards the rear initially, Born to Perform started to make headway passing the 800 metres. Jockey V.R. Jagadeesh was pushing his mount vigorously and the 5 year old responded readily, to shoot into the lead 300 metres from home. Rise and Rise finished second from Arc Angel in a close finish amongst them.

Count Royal (Royal Kingdom-Count the Stars) won the Nandidurga Plate, the concluding race of the day. Chantilly Jewel was withdrawn before the race after she dislodged the rider on the way to the gates. Count Royal showed plenty of speed at start and moved quickly to hit the front. Zamindar put pressure on the home stretch but started to drift out and Valdir De Sousa who had replaced P.S.Chouhan on Count Royal, rode out to win comfortably.