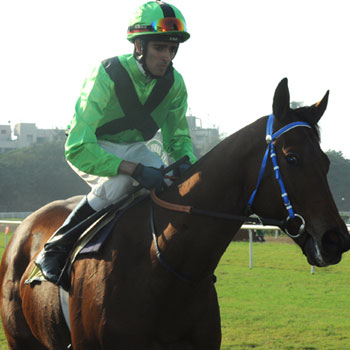 Déjà Vu (S Zervan Up), winner of The A Campbell Trophy

Déjà vu (Black Cash – Bon Sang) put to rest all speculations that the pre-race suspense of the A Campbell Trophy presented. Although he was the prime favourite, Victorious March too had a strong contingent backing her. Jimbo and Sugar Loaf were the others in the minority who were quoted at saner odds in the field of seven.

Sugar Loaf shot ahead to lead the field and went at a cracking pace. Déjà vu was right up next with Victorious March lurking alongside on the inner rails. They were followed closely by Winter Wind, Rule Forever, Visionist and Jimbo.

The race was over far too quickly as Déjà vu propelled by Zervan was speeding in with an alarming burst. Sugar Loaf just couldn’t match that brilliance and Victorious March was fading away as well. Past the 400 Déjà vu had taken charge and his stranglehold was obvious. He sailed away with surprising ease to launch a ridiculously easy victory clocking a fast timing of 1:10:47. Rule Forever improved positions and did well to beat Sugar Loaf for the runner up berth. Sugar Loaf looked good and would probably do better over a slightly longer distance. While the others ended close to one another, Imtaiz Sait’s Déjà vu clearly was far superior on the day.

Zervan is riding high of late and is the jockey on the rise. He is pretty seasoned now but the improvement has been tremendous over the seasons. He has the temperament to match and he is showing enough promise to raise levels higher in the days to come. Déjà vu was his second winner of the day. Zervan had started on a winning note on fancied Classic Ruler, whose odds surprisingly showed an alarming drift at race time (3/1 ante-post to 6 to 1).  Carry all of 60 kilos, Zervan guided the Mansoor Shah trained Classic Ruler to the front early on to share the lead along with Stylish Strokes. Fancied Blush was way off the mark closer to the rear of the field.

Zervan urged Classic Ruler soon on turning for home and easily got past Stylish Strokes inside the final 400. Once in the lead, Zervan booted home the advantage and was soon out of bounds to his rivals. He stretched away in style to romp home a clear winner almost 4 lengths ahead of Arabian Chief. Blush galloped when all was over to end close alongside Arabian Chief.

Albuurz (Diffident – Knowle Park) logged an impressive victory at nourishing odds (6/1) and jockey CS Jodha carried on from a good start to stay ahead all the way to the wire. Setting off at a crisp pace, Albuurz galloped on a tight rein until the turn with Starlight Magic and So True in hot pursuit.

Into the straight, Albuurz kept a brisk pace going and CS Jodha got forceful only in the last 300 meters. Check Her Out, one among the fancied runners, showed a wee bit of spark bid way up the straight, but that was far too minor and too brief to get her anywhere close to the front runners. She ended a tame fourth. Starlight Magic, who followed the winner throughout the race, showed a lot of spark in the final 100. However, Albuurz had it all covered and prevailed by a narrow margin of half a length in the end. So True held on to the third spot.

Mable (Diamond Green Lady College) ridden by Suraj Narredu, ran to expectation alright, but the opposition showed no resolve and let her win without toil or sweat. Settling into the fourth position behind Plan B, Conztanza and Phosphor, Mable improved a rung entering the homestretch. Plan B weakened soon on straightening up and just as Phosphor was understanding the feel of the lead, Mable accelerated commendably and zipped past and drew away. She won by a good 3lengths plus margin, clocking under the minute for the scurry. Purple Mokara improved positions and ended second beating Springbank and Phosphor in the process.

Silsila (Sedgefield – Divine Honey) earned a memorable victory on debut in an absolute thriller. You Are The Boss led the field to Yellowzone, Silsila and Panthera and these were the only ones in prominence. You Are The Boss looked good coming into the straight and was on course to his maiden win. Yellowzone did challenge the leader, but could not sustain. Panthera was right with them but was not quickening. Silsila came with a sudden burst just when the supporters of You Are The Boss were about to celebrate. The final burst was too fast and furious and Silsila shocked Silsial on the post.

Honest Pleasure (Ikhtyar – Charlize) pulled off a sensational victory and finally tasted first blood in his fifth start. It didn’t come easy though, as he had to fight all the way to the wire. Trainer Rehanullah Khan had always thought highly of his ward, but had to bring him to his best after some setbacks. He was spot on this time and Honest Pleasure won in an exciting finish.

Octopaul, who had garnered a lot of betting at closing time, faltered at the start which made his task that much more difficult. He did cover ground in the final stages, but did not get a smooth run until into the final furlong. The combination of a poor start and the rough passage proved fatal for Octopaul.

Hawaiian Princess showed the way and led the field homewards. Distant Promise tried to slip in through the rails and did not get lucky. He was clearly uncomfortable between horses and didn’t give off his best. Meanwhile honest Pleasure showed god paces to get past Hawaiian Princess. He had barely taken charge when Gates of Heaven started to apply pressure. Gates of Heaven’s charge blocked the passage for Octopaul and Rajendra took forever to switch lanes. Honest Pleasure was ridden out powerfully by Neraj Rawal and the pair managed to have it right on the wire and quell Gates of Heaven’s equally powerful challenge.

Woven Dreams (Ace – Divin Lumiere) looked the part in the paddock but as it turned out, labored to victory. Yardstick did all the front running until into the straight. Then Capri took over with Bunga Bunga breathing down her neck. Inside the final furlong, Bunga Bunga took over the lead gingerly and was giving it all to sustain. Woven Dreams was ridden all out and the Sunderji trainee made a brave effort to wear down Bunga Bunga and get ahead to win with a just over a length to spare. Queen of Venus was the one who ran in when all was over. She was not sighted until the final stages and finished on very well to take the runner up spot.

For the Professionals, jockey S Zervan and CS Jodha scored a double each.