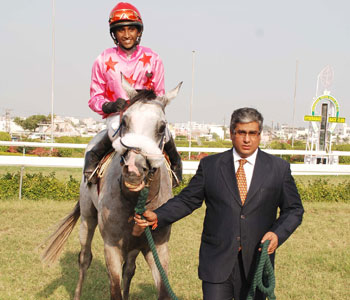 L.V.R.Deshmukh trained Vijaykeerti (Aussie Rules-Cielo Vodkamartini) came up with a stunning gallop down the final straight to win the Lingapur Cup, which featured Monday’s races at Hyderabad. This is the second successive win for Vijaykeerti, A.M.Tograllu being the rider on both the occasion. Racing third last in a field of thirteen horses till entering the home stretch, Vijaykeerti was pulled out to make a bid on the extreme outside and the grey colt came like a whirlwind to storm ahead and register an encore. Greek Fire, Jabel Queen and Westminister filled the frame in that order, while the favourite Melody Queen ran poorly.

Another notable performer of the day was The Leader (China Visit-Lei) from S.A.Shehzad Abbas’s stables, scoring an encore in the Star of Gwalior Cup, the day’s opener. Jockey A.Imran Khan had The Leader racing about three off the fence all the way in fourth position till the final bend. Into the straight the Odalis came in first followed closely by the favourite Oasis Vision and The Leader improving steadily to be in striking position. Inside the last 300 metres Oasis Vision charged to the front but was no match when The Leader was alighted to the task. Ruffiano and Rosemead were finishing on to take the second and third position respectively, pushing back Oasis Vision to the fourth slot.

Jockey A.Imran Khan was the only professional to score a double, piloting Shamsuddin’s youngster Baazigar (Chatham Strait-Rising Tide) to a pillar to post win in the Romantic Fantasy Plate. A winner on debut over 5 furlongs, Baazigar took the additional 200 metres in its stride. Golden Arrow was in chase all through the race and ended up as the runner-up.

J.Silvester trained Smrithiman (Burden of Proof-Aylesbury) gathered momentum under the strong riding of Carlos Henrique to win the Amaravati Cup. Ice Mountain was in front, right from the start and had a sizable lead, coming into the last 400 metres. Smrithiman rallied along the rails to move to be second near the distance post and bridging the gap fast, moved alongside Ice Mountain and surged past effectively. Kansas City Mac was third another four lengths adrift.

Trainer K.Satheesh who failed to succeed on Ice Mountain, led in the race favourite Rich and Famous (Emerald Cat-Wine N Song) in the very next race, The Olympic Flame Plate. Moving well from the outermost draw, Rich And Famous got to the front quickly and led all the way. Krithiman came up strongly inside the last 200 metres and went stride for stride but apprentice Kiran Naidu rode out Rich And Famous to hold on by a ‘head’ at the wire.

Anupam Sharma trained Caladium (Case Law-Colonel’s Dream) justified the favouritism in the higher division of the Wishful Thinking Plate. Showing plenty of speed at start, Caladium surged ahead to take the lead and maintained a four lengths gap from the nearest runner all through the race. Maid For Love, Max Baby and Inspiring Tunes filled the frame in that order in a close finish.

Nilesh Rawal rode Ananth Vatsalya’s Cypress Way (Sussex-Flight Fantasy) to victory in the other  division of the race. The favourite Cherry Hill took charge inside the last furlong but could not sustain when Cypress Way started to move strongly. Sugar Deal came up with a late effort to snatch the runner-up berth from Cherry Hill close to the winning post.

The year came to an end with trainer Faiyaz Shaikh’s Handsome Hawk (Hymn-Sevilla)pulling off an upset win in the Cyndy Plate, the concluding race of the day. Moving closer around the field, well before approaching the final turn, Handsome Hawk shot ahead under G.Sai Vamshi and drew clear. Vijay’s Champ was in futile chase in second while Aerosmith finished a disappointing third.