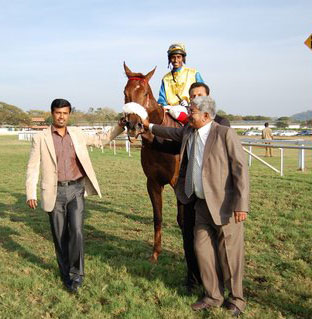 Micheal Eshwer trained Iron Marshall (Placerville-Rivage) reproduced its winning form in the Solitaire Cup, a seven furlongs trip for horses rated 80 and above, which was the main event of the eight races card on Wednesday at Mysore. Iron Marshall made light of the 14 points penalty that he had incurred for its earlier win, en-route to another convincing win over its seven rivals. Daring Dynamite set out in front from the start and Iron Marshall was positioned in second, at a safe distance. Approaching the distance post, jockey D.K.Ashish gave a couple of backhanders to remind his mount of its task and the gelding quickened readily to assume command and stay well. Daring Dynamite held on to the second spot while Hurricane Bay flashed on from the rear to finish a close third.

Trainer J.Saravanan, who is having a good run this season, led in Virat (Hurricane State-Career Collection) in the Karkala Plate. Showing good speed at start, Virat moved swiftly from an outward draw to get to the front and lead the field.  Inside the last 150 metres, The Spartan was the only one who was getting closer and the rest were not making any impression including the favourite Legal Knight. Virat moved alongside Virat and the two went stride for stride in the last 100 metres. Virat held on by a ‘head’ at the finish to be the winner. The top weighted Dancing Touch finished third.

First timer Ace Bucephalus (Rebuttal-Shantay) from trainer Bipin Salvi’s yard, who was looking the best in the parade ring, produced a scintillating gallop on the final straight, to record an impressive victory in the Mauritius Pearl Plate, a seven furlongs trip for 3 year old maiden horses. Ace Bucephalus was a bit slow into the start but made headway quickly to be fifth as the field approached the 800 metres board. Into the home stretch, Azure Fire and Yakeen were disputing the lead and Ace Buchephalus was getting into striking position but running a bit green. Jockey B.L.Paswan corrected the Waverley ways of the youngster and the colt shot ahead to register a fine win. Axure Fire and Yakeen finished second and third respectively. Dasara Queen was withdrawn after being troublesome near the gates.

The 6 year old Born To Perform (Mischevious Music-Rising Phoenix) from the stables of P.C.Tejaswi scored an encore in the Nelamangala Plate, the opener of the day. Bahman was on a start to finish bid, with a lead of over two lengths on entering the home stretch. Born To Perform was in about seventh position on top of the straight, was pulled out to make a run on the extreme outside and with a resolute gallop surged forward to win. Bahman stayed in second while Maximum City and Rising Beauty filled the frame.

C.D.Monnappa trained Glitterato (Young Senor-Glittering Star) galloped well under S.Mubarak to win the Ansbach Plate. Going into the lead within the first furlong, Glitterato kept kicking on inside the last 300 metres to win easily. Huckleberry Finn was in chase all through and ended up second after failing to overhaul the leader.

Zareer Darashah trained Golden Slipper (Burden Of Proof-Rhapsody In Blue), who had placed in all its seven runs but failed to win a race, finally came good under Valdir De Sousa to lift the higher division of the Panaji Plate. Golden Slipper was held back in third while Rich Rogue and Gris Rapide disputed the lead in front. Into the last 400 metres, Golden Slipper moved around the duo in front and skipped away to win by a big margin. Magnifique moved in late to beat the rest. Heavenly Divas finished third while Vrajanandan who was loitering at the tail till the final bend showed up from nowhere to take the fourth spot.

Ranjeet Shinde trained Rocket Ronnie (Mull Of Kintyre-Confluence) who was winless from a dozen runs, finally pulled off the biggest upset of the day in the lower division. After racing in mid-field for most part of the race, Rocket Ronnie improved steadily, weaving through the horses in front and surged past the leader Little Athena 250 metres from home. Queen’s Cruise finished on second while Samrat came with a long stretched run to finish a close third.

G.T.Surender trained Emerald (Emerald Cat-Havana Goodtime) won the Skyline Plate, the concluding race of the day. Racing fifth as they rounded the final turn, Emerald came up strongly on the outside to sweep past the front runners and win. Naughtsandcrosses finished second three parts of a length ahead of Theworldismine.