CAN DANDIFIED EMULATE THE ‘COWBOY’? 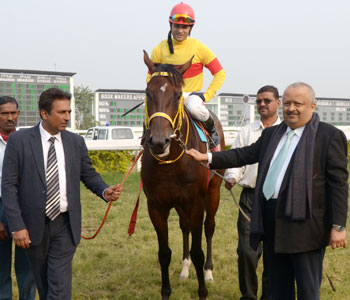 RCTC is all set to create history on Sunday in more ways than one. This will be the first running of the highly prestigious Indian Turf Invitation Cup where nominated horses which are five years old or over will be permitted to run.

Local railbirds were kept on tenterhooks till the acceptance stage as to whether five-year-old Dandified will participate in the Super Mile Cup as a hot favourite or in The Indian Turf Invitation Cup as somewhat of a long-shot. The connections have taken a gamble and opted for the latter – the temptation to grab this once-in-a-lifetime opportunity was a little too much to forsake. And who can blame them?

Oldtimers still recall with a sense of pride that memorable afternoon in the year 1975 when the last local nominee to win this great race - Midnight Cowboy - left the field standing in the straight.

Named after the Dustin Hoffman hit of the seventies, Midnight Cowboy was a handsome bay with a prominent blaze and a pair of socks on his forelegs. Sired by the prolific Young Lochinvar out of Take Cover, the powerfully built colt commenced his racing career in Calcutta in 1974 under the care of a young trainer named Paddy Rylands.

This property of the gorgeous and graceful Maharani Gina Narayan was installed as the firm favourite at 10-to-8 on and entrusted to champion top-weight rider Richard Alford.

“Midnight Cowboy was undoubtedly the best horse of his era,” says Alford, perhaps a trifle wistfully. “At that time, Maharani Gina Narayan was one of the country’s leading owners. Naturally, I was a little nervous before the race, but I had gathered enough big-race experience by then to know that apart from saddle artistry, concentration is everything. I knew I had to be wary of Half-a-Crown, a winner of five classics at Chennai and Bangalore.”

Sure enough, Half-A-Crown was threatening to run away after Calcutta’s infamous turning for home. At that point of time, ‘The Cowboy’ was snugly tucked along the rails in the sixth slot. Alford moved him up quickly along the rails to be fourth and switched him to the outside before reminding him of the task at hand. The Cowboy responded majestically and cantered away for an unforgettable five-length triumph.

It is left to be seen whether nephew Christopher Alford, who will be astride Dandified,  will have a similar story to tell after the running of the Invitation Cup on Sunday!