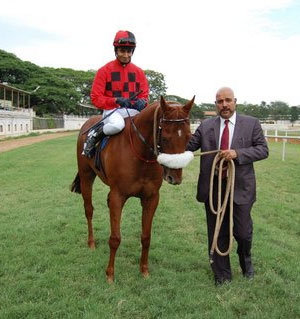 Pratap Kamath trained Rio Grande (Ontario-Sexy Gal) was impressive on its first appearance at Mysore, winning the F.B.Sharma Memorial Cup, a six furlongs sprint for horses rated 60 and above, which featured the day’s races on Wednesday. The six year old had shifted base from Hyderabad at the start of the ongoing season. Tusker, a last start winner was sent into the race as the favourite and its position in the betting got stronger after Miyarsprincess was withdrawn at the gates after the rider hurt himself following the horse’s unruly behavior. Chestnut Charmer set out on a start to finish bid and brought the field into the home stretch. Rio Grande picked up speed near the distance post and streaked through to win comfortably by over five lengths. Chestnut Charmer finished second while its stable companion finished in the money beating Lotus Pond. Tusker did not rise to the occasion and ended up fifth.

T.Natraj trained Orient Glory (Placerville-Orient Dance) won the J.K.Van Ingen Memorial Trophy, which was the other trophy race of the day. Tracking Amiable Lady till the 500 metres board, Orient Glory took charge on top of the straight and kicked on when Impedimenta put up a strong challenge in the last 150 metres. Prezzie finished a close third, ahead of Aristocratic. Sweet Timer, who was expected to put up a good show lost pace on the straight after bursting its blood vessels and ended up fifth.

The most impressive performance of the day came from J. Saravanan trained Virat (Hurricane State-Career Collection), who created a new course record over 1200 metres, erasing the one that stood in the name of Palazzio’s Son for almost 3 ½ years. Virat set out in front under M. Rajesh Kumar and played ‘catch me if you can’, opening a gap of over six lengths. Inside the last furlong Virat kept the tempo and kicked on to complete an encore. Gazaki beat the rest to finish second while color Me was third, ahead of the favourite Treasure Mountain.

Keturah (Burden of Proof-Astrodance) from the stables of Zareer Darashah galloped to a stylish victory with Trevor Patel astride, in the Kolar Plate. The filly which went into the race at cramped odds jumped out well and settled nicely in second behind Big Hero. As the field approached the final 400 metres, Keturah went to the lead with minimum effort and completed the task without being stretched. Altira was the best of the rest. Jazzbythebay and Delta Delight finished third and fourth respectively.

Darashah and Trevor completed a double, having won the Kushalnagar Plate, the first race of the day on first timer Artic Rose (Rebuttal-Arctic Bride). The daughter of Rebuttal displayed plenty of speed while stretching out to take charge near the distance post. The ‘on money’ favourite Southern Grackle received a check early in the race and travelled about five off the fence all the way. On the home stretch the running of Southern Grackle was further disturbed by the rider less Black Dragon. Carisa finished second, in front of Pepper King while Southern Grackle filled the frame.

Azure Fire (Tejano-Crown Secret) gave the trainer Pratap Kamath a double for the day. Azure Fire was taken to the front at start by jockey Janardhan Paswan and made every post a winning one. Stable Companion Heavenly Divas chased the winner all the way in the last 400 metres to be the runner-up. The short priced So Fast was never in the hunt and ended up a tame third.

A good ‘gamble’ by the connections of Byzantine (Warrshan-Seriously Nicole) came good in the Dubare Forest Plate. Settled in mid field till the final bend, Byzantine improved to join Born For Beauty on top of the straight and galloped easily to take charge near the distance post. Queens Colour came in late to take the second place from Born For Beauty.

Santosh Rao trained Beautiful Green (Storm Trooper-Royal Yavarro), who had won on the opening day as a stunning upset, scored again in the Melukote Plate, the last race of the day. This time around Beautiful Green was in the reckoning as the second favourite behind Time matters. Ice Splendour and Beautiful Green matched strides in front all the way from the start. They fought a keen battle till Beautiful Green travelled the better in the last 100 metres. Time Matters finished third.