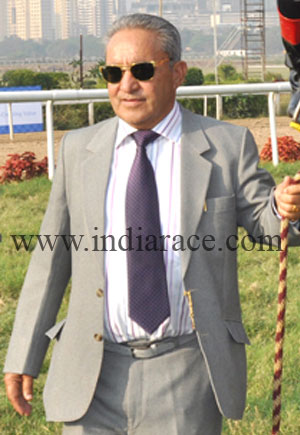 Sport as a career is a demanding proposition and one has to remain focused on the job permanently. The rigors of the work-schedules are always high. It’s even more challenging when one is dealing with the preparation or handling live stock. The hunger and the desire to excel each time on a new day, regardless of past failures and disappointments, requires immense mental strength and the will to resurface time and again from professional set-backs.

Any sporting arena is a crowded place. Several emerge to the top level and leave a trail of success marked with commendable achievements in their chosen field. Horse racing is no different where star performers are concerned. There are select few that soar to greater heights, raising the bar with admirable consistency. Veteran trainer Jaggy Dhariwal, rose from a jockey to achieve tremendous success as a race horse trainer. He has saddled winners in every racing center in the country. He recently took his winning tally past the 2000 mark, a milestone only a handful has crossed. Madhukar Bhagawan, Racing Correspondent of Indiarace had a brief chat with the Champion trainer recently.

India Race :How did your introduction to horses come about?

J.S.Dhariwal: MY FASCINATION FOR HORSES STARTED VERY EARLY. As a school boy I used to travel from Simla, where I was studying, to Amritsar to visit my uncle’s farm. I was immensely fascinated by the majestic gait of the horses at his farm and was instantly drawn towards these lovely creatures. You may call it ‘love at first sight’. It was here that I first got on a horse. I used to ride on the banks of the river there, and it felt wonderful feeling the breeze blowing on my face. I was hooked for life!

As I grew, I moved to England and after my father’s death I stopped studying and started working, doing different jobs. I worked at the customs and later in General 18 stores.

As destiny would have it, I met the Maharani of Jaipur at the Great Windsor Park during a polo match. The Maharaja was the referee for that match. The Maharani was kind to me and she recommended me to her brother, the Maharaja of Cooch Behar who owned horses in England and used to race there those days. So it was a sort of ‘Royal’ initiation or introduction to races in a way.

The Maharaja of Cooch Behar introduced me to Mr.Bill Rickaby and I soon landed at Newmarket. I was under the care of trainer Harvey Leader. I did my apprenticeship there for around 18 months.

I was a bit ill at ease there as Indians were not being highly encouraged, due to racial discrimination that was in prevalent during those days. Mr. Mangalorkar’s brother and a few other common friends advised me to shift to India and that brought me to Madras. I did my jockey apprenticeship at Madras and was happy to graduate with 40 winners in quick time.

IR: How successful were you as a rider?

J.S.D.: I have ridden over a hundred winners. The bright spot in my riding career was winning the Nilgiris Gold Cup- which was then popular as the Nilgiris Derby- three times. I had problems maintaining my riding weight and therefore decided to call it quits.

IR: When did you become a trainer?

J.S.D.: In the year 1976-77 I had a stint for six months as an assistant trainer with Mr.D.M.Thompson, His training methods were similar to that of Mr.Mangalorkar. He was kind enough to entrust a few horses to me and I got going, with a string of horses to train and my stable began to function. I did well for my owners at Madras right from the early days and I also emerged as the Champion trainer later on.

There have been only two Indian origin trainers who have been champion trainers till date at Madras, and that was Mr.Ali Asker and me. Those days foreigners like Tom Hill, Sam Hill and D.M.Hill were the ones who dominated the racing center. This, I consider, a feather in my cap. I have also been a champion at Ooty several times.

IR: What made you shift to Hyderabad?

J.S.D.: When racing closed down in Madras I shifted to Hyderabad. I got the patronage of Mr.S.Rangarajan, who supported me in a big way. I also trained for Mr.S.Pathy and a few local owners, which include Mr.Narasimha Reddy and his partners of Chaitanya Chakram and Chaitanya Ratham’.

IR: How many classics have you won?

IR: Which has been the most memorable moment as a trainer?

IR: Which has been the best horse that you have trained?

J.S.D.: There are quite a few of them.  Young Rajput won the Bangalore Derby in record time and it took almost 18 years for that record to be broken. Storm Again, I rated him very highly and there were the likes of Arabian Prince and Siachen. Storm Again won the Invitation Cup in record time. He would have been another Saddle Up but death cut short the champion’s career. Bonzer won both the Monsoon and winter Derbies at Hyderabad.

IR: You have had a long relationship with Dr.Vijay Mallya. Can you tell us more about it?

J.S.D.: Dr. Mallya had seen me as a youngster at Ooty, both as a rider and as a trainer. He personally asked me if I would train for him. It was a big challenge for me and I accepted it. A lot of my friends then had advised me not to accept the offer and likewise there were many who had questioned Dr.Mallya the necessity of bringing me from Hyderabad to Mumbai, as I was doing very well at. Hyderabad.

I am glad that I took up the challenge. I won the Indian Derby for Dr.Mallya in my second year at Mumbai and I also finished second behind Imtiaz Sait in the championship that year. There were a few other big races that I won for him. Siachen won three classics - the Fillies Trials and the 1000 Guineas at Bangalore and also the Indian 1000 Guineas. Arabian Prince has been one of the biggest money spinners for Kunigal Stud bred horses. Arabian Prince won the Hyderabad Derby, the Golden Jubilee Cup, two graded races at Kolkatta and the Stayers’ Cup. I won the Queen Elizabeth Cup with Saddle Up before that wonderful horse went abroad.

IR: How was your experience in training the two greats, Chaitanya Chakram and Ratham?

J.S.D.: It was not easy those days. Both of them have won in good company. I had to use good tactics, their Sire T.V.Sunday liked to go the start-to-finish way. The approach worked well with them too. They were both progenies of Urvashi, a top class mare. They have won 13 classics between them and I was more than satisfied with their achievements.

IR: Did you at any time in your career want to quit?

J.S.D.: Nothing like that. I have done reasonably well although I did not have the best of horses. I have had the privilege of having long relationships with my owners. The Brar family has been owners with me for three generations. Mr.Suresh Mahindra was more a personal friend than an owner to me and his son Marthand has the same affection towards me. Dr. Vijay Mallya and I share a very cordial relationship to date.

J.S.D.: It’s a big milestone. Only a few like Mr.R.R.Byramji, Zareer Darashah and Robert Foley have achieved this feat. So to be in this select group is something that I feel proud about and I am grateful for the encouragement and faith that my owners placed in me and to all those jockeys who contributed to my winning tally, year after year.

IR: You have also been a breeder.

J.S.D.: Yes, I have bred a few horses. I have also been very lucky as an owner, having won about eight Derbies in partnership with various other owners.

IR: With the excessive production of horses in India do you feel that the quality of horses has come down along with the prices?

J.S.D.: No, the quality of horses has not come down but I can say that the quality of riding talent has shown a downward trend drastically in recent times. We had a cream of talented riders like Pandu Kade, Jagadish and Chavan, who held their good against the best of foreign riders.

IR: What according to you could be done to improve the riding talent in the country?

J.S.D.: Most of the veteran jockeys like Vasant Shinde, Aslam Kader and also Jagadish have settled down in Bangalore and it would be most ideal to have a good apprentice school here. The Bangalore Turf Club can take the initiative. The best apprentice school I have known is in Ireland. The Turf Authorities of India can send some of our riders there to hone their skills. Some of the big owners can also join hands with the authorities in this venture.

IR: How do you welcome the news of horse racing coming to Punjab?

J.S.D.: The new race course in Punjab is to come up in Ludhiana, which is financially very strong. This will definitely attract a wider set of people and we can expect many new owners and this is good news to the breeding industry. , it’s good for the sport. Racing will thrive.

J.S.D.: It has been a very fulfilling and satisfying career, however I am not done yet. I feel I have a few more years left and would like to win a few more classics. The competition is getting stiffer now with the younger generation turning out to be pretty smart trainers. My championship last winter has infused fresh desire to do well again. I will strive to pick up a few more classics before calling it a day.