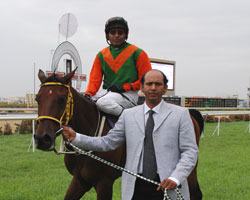 Hurricane Bay from Prasad Raju's yard, with a surprising burst of speed, in the last 100 metres, breezed past the more favoured One Mission, to win the Stewards Cup, the feature event of Sunday’s races at Hyderabad. One Mission found the initial pace too fast for him and raced second last till the final bend before improving position along the rails on entering the straight. Raj Veer had shot ahead up the straight and the leads changed quickly with Imran Khan on One Mission maneuvering his way through the field to raise hopes of a clear victory but that was not to be as Hurricane Bay swept past widest of all.

Trainer Vittal Deshmukh along with his retained rider R.Roopesh had a back to back double at nourishing odds. Vijaysena lifted the ten furlong P.M.Bokdawala Memorial Cup while Vijaysiddanth the Turf Club Cup. Bossei Girl set the pace in the 2000 metre trip followed by Vijaysena, Golden Tricks, See You There, Monduro, Danzing and Dash of Class as they passed the half way mark. On the straight Vijay Sena stretched ahead by six lengths while Bossei Girl who had dropped back after leading early, beat the rest to finish second. The Turf Club Cup turned out to be an exciting race. Chemeli and Grand Rapids looked to fight out in the race as they passed the distance post but Ave Maria who was waiting for the opportunity behind the leaders shot through with Scamper and Vijaysiddanth also making their appearance. Vijaysiddanth who got a clear run widest of all, got the measure of Ave Maria, close to the winning post. Chemeli held on to finish third.

The day started with impressive performances by favourites in both the divisions of the Best of Bold Plate. Queen of Sheeba who was sent in as an odds-on favourite in the lower division, after her second to Siph Salar on the opening week, had no difficulty in shedding her maiden ranks. D’Silva’s Ride to Glory made it a start to finish affair in the higher division. Hundred Flowers who closed in as the joint favourite with Ride to Glory finished a faraway second.

Trainer K.Satheesh’s Just be Cool left everyone sweating when he strode clear in the Grand Entry Plate, beating his ten rivals which included the stable mate, Dating, who was sent in as the firm favourite.

After a couple of rank outsiders scored, midway through the day, sending the jackpot pool tumbling down, Sprint Champ brought some relief to the race goers, in the Maltese Prince Plate, the concluding race of the day but not before thwarting the strong challenge of Practical Physics. Two lucky punters managed to get all the five legs right, walking away with over 4.5 lakhs each.