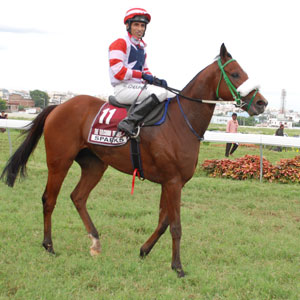 Sparks (P.S.Chouhan Up), winner of The Golconda Textiles Deccan Derby 2009

With rains lashing the city of Hyderabad continuously for over three days, the running of the Deccan Derby on the conventional 2nd of October was in doubt. However the rain Gods took mercy and the sun shone for most part of the day with the Golconda Textiles Deccan Derby 2009, run in front of packed stands, who had turned out in their best attire.

Fourteen horses having been accepted to run in the big race, picking a winner, turned out to be difficult for the race goers. Red Renegade was sent into the race as the favourite at 2 to 1, on the basis of his victory in the Colts Trial Stakes, on this very track. Going into the race, the start was delayed considerably as Cambiasso and Leonardo began to play tantrums inside the gates. When the field was finally dispatched, Amazing Ray, in a swift move, took over the running, jumping out from the outermost draw and set a scorching pace. Passing the half way mark, Amazing Ray was followed by Vendetta, Cambiasso, Red Dragon, Red Renegade, Menlo Park, Fleet Indian, Sparks and the rest. Vendetta took over for a brief while near the 800 metres but Amazing Ray regained the lost ground and brought the field into view on the straight. Sparks shot through the field, 300 metres from home and jockey P.S.Chouhan rode out brilliantly, keeping his mount on a straight course, to lift the Deccan Derby in a stunning upset. Fair Option came up with a good run but had to settle in second position, a shade in front of Fleet Indian who was veering out throughout the straight and almost finished on the stand side.

While this was the first Derby win for P.S.Chouhan at Hyderabad, trainer S.A.Shehzad Abbas had won this race on Man of the Match in the year 2006. Shehzad Abbas had earlier led Chiquelle in the lower division of the Bangalore Cup and the double on this Derby day will be cherished by Abbas for ever.

Prasad Raju’s Ave Maria made mince meat of the opposition in the Kitty Bank Cup. Well settled in second till the field approached the final bend, Suraj Narredu had to just guide the 3 year old filly and she gave him an arm chair ride to victory. Having ridden Chiquelle to victory earlier, it was a double for Suraj.

Leo D’Silva sent out three winners on the day, all at nourishing odds. El Paso slammed the opposition with a flying finish to lift the Kolkata Cup. Spot On, after her second to Messalina in the Fillies Trials Stakes, was pitched as the odds on favourite, against the other eleven runners in the race. Racing well in front on the straight, Spot On, started to shorten her strides in the last 100 metres, Crocodile Hunter took advantage and looked to wrap it up when Imran Chisty brought El Paso flying on the stand side to score an encore. Mallesh’s hard riding on Sprucespringstien made him finish a head behind Crocodile Hunter in third.

Imran Chisty, scored again in the very next race, the Chennai Cup, on Scubarioo. Scubarioo and Lone Ranger were locked in a keen tussle right from the start and as they passed the distance marker, the former kicked on, while Lone Ranger could not match strides and fell back to finish second.

Leo’s third winner was Bernardo in the concluding race, the higher division of the Bangalore Cup. Setting out on a start to finish mission, jockey Harish never found any difficulty and won the race with eight lengths to spare from Indian Storm. Alcohology and Feudal Lords finished behind Indian Storm in the same frame.

Gnaneshwar rode Narayan Rao’s Classic One to a splendid win in the lower division of the Mrs.Lakshmi Bhupal Memorial Cup. Jugnu had set out in front from the word ‘go’ over the 1200 metres trip and was found to be fighting out gallantly with Stroke of Luck till the last 100 metres. With no racing experience this season, Stroke of Luck was finding it difficult to pass Jugnu on the home stretch and just as she managed to do so, Classic One came with a flourish to land the spoils. Easy Flash dropped the rider immediately after jumping out.

English Indian was found to be toying with the opposition right at the 800 metres marker and won as he liked in the higher division.

Jockey Wayne Smith rode the firm favourite, Carte Blanche, with a lot of confidence to lift the Mumbai Cup, the opening race of the day. Above the Line who led the first six furlongs tired out and finished third behind Nano War.