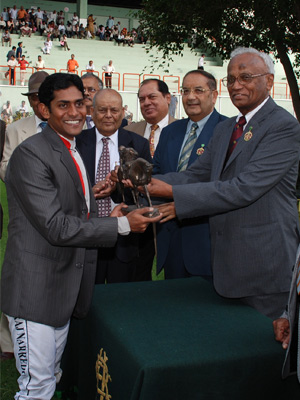 Born on 7th February 1985, the eldest son of Sathish and Radhika Narredu, etched a place in the history books of Indian racing by becoming the youngest Indian jockey to ride 1000 winners. The 1000th win came when he rode his ‘favourite’ Becket, to victory in the Nizam’s Gold Cup at Hyderabad on Monday 16th August 2010. Suraj, who joins his father Sathish and uncle Mallesh in the elite 1000 club, which in itself is a rare record, to have three from a family, also has the distinction of being the fastest to do so.

Suraj shared this momentous occasion with IR correspondent Mirror Image in an exclusive interview with Indiarace.

Indiarace: How much does this 1000 mean to you?

Suraj Narredu: It’s a nice landmark to achieve but my focus towards riding will not change much. I will look forward to more success in graded races.

IR: How did riding interest you?

SN: I used to accompany my dad to the race course in the mornings. I was fascinated by horses and started to dream of becoming a rider some day.

IR: When did you get serious about riding?

SN: I joined the Bangalore Amateur Riding Institute to take my lessons. I would go for riding on weekends and whenever my school had holidays. I was there for almost four years and even rode as a gentleman rider in Gymkhana races at Bangalore.

IR: How old were you when you took your license to ride?

IR: Who was your Hero?

SN: Frankie Dettori. My dad had brought home a CD of Fankie Dettori’s seven wins out of seven rides. It was a fantastic feeling watching Frankie ride and that inspired me to achieve something.

IR: Do you remember your first win?

SN: Definitely. It was Predominate and I had a double that day with Anjaam. Predominate was disqualified later as the horse failed a post-race test. I, therefore, do not have Predominate in my 1,000 count.

There is a small anecdote behind my first win which I would like to share with you. It was almost three months since I had taken a riding license but had not opened my account, while my batch mates were already riding winners. On our way to Mysore by train, my batchmates played a prank on me by locking me up in the train toilet for a long time. That very day I rode a double and my friends wished they were in my shoes.

IR: Was your riding stints on foreign courses of any help?

SN: My first stint outside India was in Maccau, where I rode almost 30 races that season. I did not win any race but placed in many of them. It was a very good learning experience riding with foreign jockeys. I have ridden at Maccau, Dubai, Malaysia and Mauritius.

IR: Your wins at foreign courses?

SN: I have won at Malaysia and Mauritius. The two wins in Mauritius at the International Jockeys Championship were most memorable. Carrying the Indian Tri colour after the wins was a very touching moment.

IR: Which is the best horse you have ridden?

SN: Classical Act would move brilliantly on the track, like a machine but the best is undoubtedly Becket.

IR: How do you rate your riding skills in comparison with the others who have achieved this feat?

SN: I may not be as good as most of them but I am happy my name is now along the greats. I have also not seen most of them ride but to be the youngest makes me proud.

IR: What is your next goal?

SN: I want to win more graded races and the Indian Derby, which is the dream of every Indian jockey, is definitely on my agenda. Apart from that I wish to ride more outside India.

IR: Your advice to budding jockeys.

SN: Honesty, hard work and dedication will always stand by you.

IR: What has been your strength?

SN: God Almighty and my family. Both have stood by me in my good and bad times. My dad is the backbone of my success. He’s a great guide, mentor and above all a great father. I would also wish to thank my owners and trainers for reposing their faith in me and giving me the opportunities without which I could never have achieved this feat.