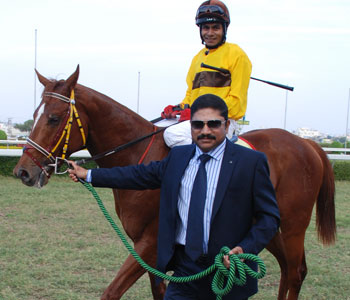 K.Satheesh trained Super Falcon (Rock of Gibraltor-Walk Beside) staved off the late challenge of Lopamudra to win the Deccan Juvenile Million, a terms race for 2 year olds at Malakpet. The chestnut colt, property of Dr.M.A.M.Ramaswamy, a winner in its previous essay was available at a liberal quote of 6-1, while Cornwalis garnered maximum support in the betting, closing at 16-10. Jockey Deep Shanker, who has partnered the youngster in all its three outings, took Silver Falcon to the front at start and made every post a winning one. Lopamudra, which has developed the habbit of going wide on the home stretch did that again and drifted out alarmingly to make its bid close to the outer fence. The filly covered plenty of ground from the last position but failed to get to the ultimate winner by a slender margin and ended up as the runner-up for the third time from as many o-utings.

The combination of trainer Donald Netto and jockey Kuldeep Singh were on a high, scoring a treble. Their wins came through Rajkumar, Winds And Waves and Field Commander. Wind And Waves (Sussex-Venice) scored an encore in the Baile Lalitha Pershad Memorial Cup in a close finish involving Black Bolt and Aware. Jockey Kuldeel Singh preferred to track the leader Black Bolt early in the race. As they approached the last 800 metres Specialist moved to run second and that also didn’t bother Kuldeep. Rounding the final turn Winds And Waves was urged strongly and the gelding moved well to challenge Black Bolt. Aware was also getting stronger on the outside and the three went all out throughout the last 350 metres. Winds And Waves forged ahead in the dying moments to pull it off by half a length. Black Bolt and Aware finished second and third respectively, with just a ‘nose’ separating them.

Field Commander (Rebuttal-Fantasy Moon) justified the favouritism en-route to its maiden win in the Pocharam Cup. Phenomenal Speed and Machintosh came in to the straight first, hotly chased by Havok and Field Commander. Machintosh surged ahead to take charge and Field Commander also improved to challenge and the two were clear of the rest. The favourite galloped well to head past Machintosh in the last 150 metres and won impressively. Havok finished third in front of Chief Executive.

Rajkumar (Eljohar-Tia) was back to the winning enclosure in the Twin Cities Cup. The speedy Dazzling Princess came up well from the outermost draw to hit the front at start. Dakshayani was in chase with The Horizontal Urge and Rajkumar in close attendance. As they came into the last 400 metres Rajkumar moved strongly to challenge and went past to spare a length at the finish. Dakshayani and Merry Maid filled the judge’s frame in that order.

K.S.V.Prasad Raju trained Rio Rojo (Tejano-Auberge) won the Track Lightining Plate, the opener of the day comfortably. The 3 year old filly headed past the front running Killer Instinct approaching the last 800 metres and stretched out easily on the home stretch to register a facile win. Flamboyant was in futile chase throughout the last 400 metres before finishing second. Most Impressive and Light Blue Sky filled the judge’s frame in that order. Graceland was withdrawn after being troublesome near the gates.

Western India based jockey Dashrath Singh was the other successful professional, scoring a double. His wins came through M.Srinivas Reddy trained Desire in the Malvado Plate and M.V.Narayana Rao’s Hidden Power in the lower division of the Meghalaya Plate.

Desire (Glory of Dancer-Another Star) came up with a startling turn of foot almost on the stand side to win on debut. Nine juveniles lined up for the five furlongs dash for maiden 2 year old horses. Sent in as the favourite among them at 7-4 Desire jumped out from the outermost draw and travelled towards the rear initially. When asked to quicken as they approached the last 600 metres, the filly went very wide and came almost to the edge of the track. Jockey Dashrath Singh on Desire did not force the youngster to correct her line and instead let her choose the path on the stand side. Dear Friend in the meanwhile had taken charge on the straight and built up a good lead over the rest. Desire started to gallop resolutely in the last 300 metres and covering plenty of ground flashed past all those ahead to win with a measure of comfort at the finish. Dear Friend, Golden Essence and Vijays Spirit took the minor places in that order.

Hidden Power (Mull of Kintyre-Cozumel) won the 1100 metres dash beating Key Note by a ‘head’. Racing a close fifth till entering the final straight while Mukhtar called the shots, Hidden Power moved strongly around the horses in front and took charge inside the last furlong. Key Note came up strongly towards the finish but failed to collar Hidden Power. Mr.Khoasteep finished third in front of Big Boss.

R.H.Sequeira trained Flying Dutchman (Hurricane State-Integrate) scraped through to win the higher division of the Meghalaya Plate. Apprentice B.H.Prashant took Flying Dutchman to the lead at start and came in to the final straight with an useful lead of over three lengths. Pacific Star started to bridge the gap inside the last 150 metres but Flying Dutxhman was still kicking on. Oasis Vision came flying from the rear as they neared the winning post and joined Flying Dutchman at the finish. The ‘magic eye’ gave the verdict in favour of Flying Dutchman, which had held on to the lead by a ‘short head’.

TURF NEWS: Jockey P.S.Chouhan has been suspended by the Stewards of the Hyderabad Race Club for a period of one year. The suspension is to start on 2nd of January 2014 and will run till the 31st of December 2014. An enquiry was opened by the Stewards after P.S.Chouhan supposedly lost his stirrup iron and pulled up his mount Rosemonde, the favourite in the Chaitanya Ratham Plate on 15th December 2013. He was charged with tampering with the equipment (loosening the buckle of the stirrup iron) and unsaddling on the track without the permission of the Stipendiary Stewards and handed the penalty. P.S.Chouhan is likely to appeal against the punishment.