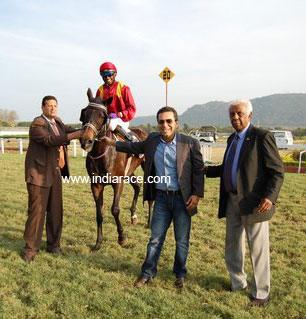 It was celebration on Christmas day for the followers of money as six firm favourites obliged in a card of nine races. Jockey Vivek was the most successful professional, scoring a treble, all of them being public choices. He won the first two races of the day through Penalty Kick and Rising Romeo respectively and signed off the day with a thumping win on Sienna. Trainers Zareer Darashah, Bipin V Salvi and apprentice Irvan Singh scored a brace each.

Michael Eshwer trained Duma (Phoenix Tower-Firecrest) which had won all its four starts on the Mysore track kept her record clean while winning the Christmas Plate, a nine furlongs trip for horses rated 60 and above. The 3 year old had recently made a trip to Bangalore for the 1000 Guineas but was planted at the gates and took no practical part in the race. The filly who was the youngest among the nine runners in the race was installed as the favourite though at a liberal 16-10 as she was being tested over the distance for the first time. Duma, who took a good jump this time settled in about fifth position initially and made a swift move to get to the haunches of the leader Bucethalis as they headed past the 800 metres marker and forged to take the lead as the straightened for home. Duma stretched out well to register a convincing win. Jockey R Vaibhav was astride the winner. Sand Dune which was slow at start improved late to take the second spot ahead of Money Bay.

T Natraj trained Carisa (Home Affairs-Blues Clues) won the Dr.Ishwari G.K.Balakrishnan Memorial Cup division I, the only trophy race of the day. Royal Shaan cut the wind till entering the home stretch, followed closely by Time To Time. Inside the last 300 metres Royal Shaan started to tire out and Time To Time took charge but that was momentary as Carisa began to gain momentum in the centre of the track and with a strong gallop raced past to win by two lengths. Little Athena grabbed the second place from Time To Time. Happiness was fourth.

Ranjeet Shinde trained Royal Prodigy (Royal Gladiator-Bountiful Gesture), a surpriser in its last outing, just a week ago, repeated that performance in the lower division. Speartooth, which was sent in as the favourite at 12- 10 went to the front at start and was looking to finish it off that way even as they came into the last 200 metres. Cash Is King followed the leader all the way and was failing in its effort to collar Speartooth. Royal Prodigy, in about fifth position as they approached the last 300 metres was pulled out for a clear run by Irvan Singh and the 6 year old gelding responded brilliantly to deny Speartooth a win  on the last stride.  Cash Is King finished third.

Zareer Darashah’s Historica (Tiger Hills-Balimaya), whose only win was a little over an year ago when the filly had just moved to Mysore from Western India, won the higher division of the Rajendravilas Plate. Historica rallied well around the field, after jumping out from an outward draw and hit the front. On the straight Historica kicked on gamely to register a fine win under apprentice M.D.Paswan. Ensantus Elegans began to cover some ground towards the closing stages but could only reduce the margin to one length. The favourite Style of Signature finished a tame third.

The lower division was claimed by Feroz M Khan trained Rosie’s Dream (Itaquere Power-La Villa Rose), beating the favourite Prezzie on the post. Perfect Speed brought the field into view on the straight after leading right from the start. Prezzie moved to be second on top of the straight and with the rider Arshad Alam pressing hard diminished the lead and forged ahead. Rosie’s Dream started to gain ground on the extreme outside and with a resolute gallop upset the apple cart of Prezzie close to the winning post. Jockey Irvan Singh completed his double with this win.  Virtuoso finished third ahead of Perfect Speed.

Western India import Santa Maria (Mull of Kintyre-Symphony), which had shifted base after its debut at Pune where the filly had finished fourth, outclassed the opponents in the Nandidurga Plate. Zareer Darashah trainee Santa Maria carried a back breaking weight of 62.5 kilograms to a pillar to post victory over the 1400 metres distance. Rusty, Indian Hero and Admiranda filled the judge’s frame in that order.

Bipin V Salvi trained Penalty Kick, which had found one better in its last three starts, finally came good in the opener, the Pertigalete Plate. Magnifique slipped in along the inner rails to get to the front as they came into the last two furlongs of the race. Samajdaar started to cover ground in the centre of the track and grabbed the lead. Samajdaar looked good at that stage but the gelding started to veer out and Penalty Kick seized the opportunity and galloped strongly. The two matched strides in the last 100 metres and Penalty Kick just managed to have its head in front at the wire. Abbys Baby got very feeble assistance from the saddle but still finished third in front of Duty Free.

C D Monnappa trained Rising Romeo (Oath-Actress) score a facile win in the Bird Sanctuary Plate to score for the second time from as many starts. The dark bay colt hit the front as the gates opened and made every post a winning one unchallenged. Sancy came up late to beat the rest of them. Obelinna Princess and Ultimate Princess finished third and fourth respectively.

Jockey Vivek completed a treble one Bipin Salvi’s Siena (Imtiyaz-Really Romantic) in the Taj Mahal Plate, the concluding races of the day. The 3 year old filly took charge inside the last 350 metres and drew clear to score its maiden win. Born To Perform which was lying last till the top of the straight moved through horses to finish second.