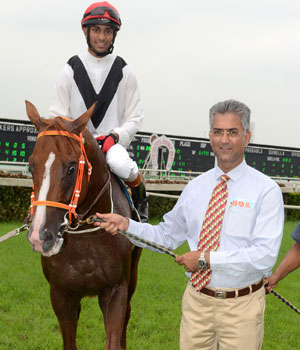 The outsider of five, Bharath Singh-schooled Santos (Burden Of Proof-Flamingo Fan), bagged the Calcutta Juvenile sprint on Saturday after jockey Trevor Patel had successfully coaxed a late gallop out of the Burden Of Proof-Flamingo Fan colt to overhaul the front-runner Free Energy and peg back the favourite Meet The Legend. Touted by those close to the grapevine as a supposed ‘good thing’, Vijay Singh’s Evesham failed to meet the class of his rivals and made matters worse by drifting to the outer rails as he is wont to do. Should he overcome this shortcoming, he might fare better in the future. The top four finishers were all ridden flat out, with Trevor Patel pulling off an opportunistic triumph, possibly because he had nothing to lose as a 10/1 shot.

An interesting hypothetical question arises at the post-race analysis. Would Free Energy have won if ridden in check for a late burst which he relishes? I guess we will never know the answer now. The start-to-finish attempt was obviously a ploy to throw the favourite Meet The Legend out of stride, but in retrospect it may have backfired. Well, it worked in part. The stable probably didn’t recognize Santos as a threat. That’s racing! One never knows what danger lurks round the corner, especially with youngsters. The win of Santos completed a treble for Bharath Singh, his other two winners being Torero and Winds Of The Ocean.

The Independence Cup, run over seven furlongs, turned out to be an absolute blinder of a race. Bharath Singh’s Sage Valley was on a start-to-finish mission and very nearly succeeded in pulling it off. Second favourite Confidence failed to match strides with the front-runner and gave up the fight after the turn while Christopher Alford was seen to work vigorously on his mount Fly Like The Wind. The sparingly raced public choice responded gamely to peg back the front-runner at the post. Top-weighted Sunshine Girl occupied the third slot and is one for the notebook.

The afternoon commenced with Errol Bhungard-trained Spartacus (apprentice Azharuddin up) winning the mile race for the Bourbon Queen Handicap by a street. The top-weight favourite Barocci  showed out a little till the bend but was no match for the winner. Despite being a fractious customer, Yerevan finished runner-up in the hands of S. John.

The shortest priced favourite of the day, Torero (Brave Act-Rhapsody in Blue), gave visiting jockey Sandesh an armchair ride as this half-brother to Astaire showed that he is suited more to the seven-furlong trip. Although the field lacked worthwhile opposition, the win in itself was pretty impressive.

Sandesh completed his double with Winds Of The Ocean in the 1800 metres race for the Active Asset Handicap. Very cleverly ridden, (contrary to his earlier runs) the Bharath Singh ward made every post a winning one with the aid of a breather near the 800 marker. The five-year-old was galloping freely all the way while the favourite Exclusive Colours was being pushed six lengths behind to keep up with the pace.

Vijay Singh-trained Flavius (Noverre-Flavia) won on debut as a four-year-old. He definitely had the confidence of the punters as he was the ante-post on-money choice. Songstress it was who was trying her best to run away with the sprint but Shailesh Shinde maintained his focus and kept working on his mount till he ensured victory, albeit narrowly.

Patrick Quinn’s Assassin proved that his win on the opening day of the season was no flash in the pan victory. Penalised 8kg thereafter, PS Chouhan rode him on this occasion in the Make My Day Cup and stole a march on his rivals when he got a clear run along the rails as Smooth As Silk and Macedonian shifted out. Chouhan had the sprinter handily placed in a box seat and waited for just this opportunity.

Torrential rain before the last race left the track on the heavier side which could have suited Dancehall Days to the hilt. The Manvendra Singh runner was piloted by S. John to a fairly easy end-to-end triumph. Ante-post favourite Hayata folded up at the bend to finish a poor fifth.