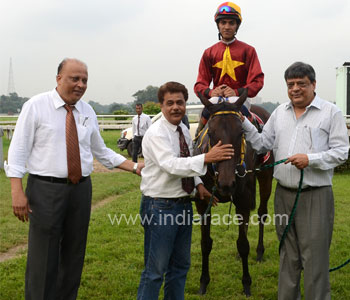 Barring two clear favourites (Style Dan and Andreus) who won with a certain degree of authority, punters were kept on tenterhooks for the rest of afternoon as spotting winners was no mean task. The mood was set in the day’s opener where the favourite Chhundu was available at 9/2 – a rare sight indeed at this centre.

The Gumaan Cup saw Andreus close at 2/1 and Malpensa at 5/2. But it was the 6/1 shot Mr India who shot ahead as the gates opened. Unhappy to be elbowed out of a leader’s role, Shailesh Shinde hurriedly took his mount to the helm of affairs and opened a gap of about a couple of lengths. He increased the lead at the turning for home, after which Star Symphony and Malpensa tried their utmost to cut down the leeway but to no avail. Though Andreus needed a couple of cracks at the distance post to keep him going, he was never in any real danger of being caught.

In the very next race, The Great Tribute Cup, money poured in on Javed Khan-trained War Games and Patrick Quinn’s Home Alone but they could do no better than finish third and fourth respectively. The final hundred metres saw a keen tussle between rank outsiders Vijay Monarch and Follow The Dream (a stablemate of War Games) with the latter prevailing in the hands of whip-less apprentice Jorawar Singh. Home Alone made up considerable ground along the rails to finish third. It’s known to be a difficult ride and under the circumstances, the apprentice did his best in a packed field of twelve.

As if that was not enough, punters were in for an even ruder shock when friendless Bongani from Jasbir Singh’s yard brought down the curtain in dramatic fashion in the hands of another apprentice Rajinder Singh – who incidentally had ridden the same horse to victory in similar fashion last monsoon. The on-money favourite Amarilla appeared to be struggling while it was Words (Sameer up) who threatened to overhaul the front-runner at the distance post but failed to do so and Bongani kicked on merrily.

With three entries in the opening race, trainer Vikash Jaiswal obviously meant business. Though a good second in her last essay, Eternal Instinct was available at 6/1 in the ring. Brother Vinay Jaiswal had her well positioned from the outset while Chhundu and Thrice Blessed called the shots. The five-year-old mare took over the running in the straight and won quite comfortably from a late finishing Lovely Magic.

Bharath Singh-trained Shourisha, brother Vijay’s Ace Glory and Manvendra Singh’s Cohiba were all in the betting for the 1800 metres Poles Apart Handicap. Since the last named failed to show any sparkle at any point during the race, it was reduced to a two-horse affair. With none to take up the running, Shourisha and Shailesh Shinde decided to go on a start-to-finish mission at a gentle pace which saw the first 1000 metres being covered in very poor timing. Ace Glory (C.Alford up) was in close attendance right through. The tooth and nail battle for supremacy commenced from the top of the straight and at the end of it all, Ace Glory and Alford came up trumps. One can understand Self Directed staying back and viewing the sights in the backstretch as he is from a rival stable, but just why Jamaican was not used a pacemaker for Shourisha is a trifle baffling. The result may well have been reversed with a proper pacemaker in a true-run race. After all, Shourisha had shown his true mettle in the Grand Annual when he moved with raking strides in the straight to get the better of this centre’s highest rated three-year-old – Mr Gorgeous.

Javed Khan’s Style Dan (apprentice Azharuddin up) won the Jujube Handicap by a street. Lying a handy third along the rails behind pacemaker Fervent Quest, Style Dan left the field cold once the straight was sighted.

Vijay Singh’s stable is studded with blue-blooded colts and fillies and Anbiorn is yet another one of them. Sired by Multidimensional out of Aldente (who is by the legendary Razeen), Anbiorn made every post of the Smart Charmer Plate a winning one, but not before being given a fright by top-weight Beyond Expectation. The pair looked inseparable at the wire but the verdict stood at a microscopic nose, which in the earlier days may well have been awarded as a dead-heat. But then, as in cricket, one must accept the third umpire’s decision with grace and if possible – with a smile. After all, this is thoroughbred racing, where the ‘glorious uncertainty’ is an accepted part of the game.