FRENEMEE SCAMPERS HOME IN THE STAR OF MYSORE TROPHY 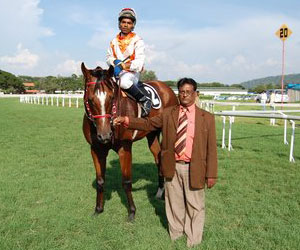 Trainer J Babu Rao leading Frenemee (Harish B Up), winner of The Star Of Mysore Trophy

Racing was on a firmer ground on Friday when compared to the opening day as rains took a detour from Mysore on Thursday.  It was mixed bag for the followers of money at the races on the second day, with four favourites obliging out of eight races. There were close finishes in half the day’s card and no professional could repeat their winning performance.

The 5 year old Frenemee (Puerto Madero-Musical Pepper) trained by J.Babu Rao who had made it to the judge’s frame in its last three starts at Bangalore, came good to lift the Star of Mysore Trophy, the feature of the day. With lesser known jockey B.Harish on the saddle, Frenemee disputed the lead with Color Me all the way from the start till the last 400 metres. He then took charge but was soon joined by Sofast from the outside. The two fought out every inch of the last 250 metres and Frenemee prevailed by a ‘neck’ at the finish. Artic Rose finished third six lengths away while Royal Salute who went into the race as the piping hot favourite raced second last till the last 300 metres and finished on to be fourth. Demanding Format and Scholar were permitted to be withdrawn.

T.Natraj trained Precious Replica (Kingda Ka-Licata) bounced back to winning ways in the R.R.Komandur Memorial Trophy, a seven furlongs trip for horses rated 40 to 65, instituted in memory of trainer R.R.Komandur. Aanchal Beauty set out in front followed closely by Precious Replica. Inside the last furlong the 6 year old Aanchal Beauty continued to kick on with Precious Replica, half its age in hot pursuit. The two headed towards the winning post with a ‘never give up’ attitude and Natraj’s trainee managed to snatch the race on the last stride. Ultimate Princess moved closer towards the finish to take the third spot. The favourite Santa Maria was never in the hunt and finished fifth behind Oscar Sparkler. Andina was withdrawn before the race.

Zareer Darashah trained Royal Regina (Noverre-Shanley) came out of her maiden ranks in the Regency Gold Plate. Off to a flyer, Royal Regina got to the front to lead the field at start. Inside the last 300 metres first timer Glorious Light started to challenge from the outside and Always United decided to wait for the split along the inner rails. With about 100 metres left Glorious Light had lost out in the fight and Always United who found the gap opening up went for it and flashed on late but the winning post came to the rescue of Y.S.Srinath and Royal Regina who scrapped through by a ‘head’. Glorious Light finished on to be third 1 ¾ lengths away.

Mystical Shadow (Gaswar-Chasing Shadow) from the stables of V.Narayana Gowda who had finished third in its last two starts scored an impressive win to come out of her maiden status in the lower division of the Cauvery Plate. A Move to Remember in its customary fashion led the pack and Anmol Hira was in chase. Entering the last 400 metres Anmol Hira surged forward to take up the running and the favourite Mystical Shadow improved well to get closer and strode clear to win easily by two lengths. Kentucky Rose and A Move to Remember finished third and fourth respectively.

The higher division was won by Neil Darashah trained Jolie (Glory of Dancer-Kilshannig). The 4 year old filly whose maiden win was exactly a year ago went on a start to finish bid under Arshad Alam and kept the effort of the favourite Cattleya at bay in the closing stages. Society Music, who was in the fighting line with Jolie till the last 150 metres finished on to be third ahead of Game Dancer. Campeon and Go Man Go were non-starters in the race.

C.D.Monnappa’s Zamindar (Sharp Attack-Dear To My Heart) scored an upset win in the higher division of the Talakadu Plate. The 5 year old was neglected in the betting despite finishing second in its last start. The favourite Oriental Belle and second in demand Thunder disputed the lead all the way from the start and Zamindar closed up to be a close third as they rounded the final turn. Thunder was a lost cause approaching the distance post and Zamindar responded well to Vishwanath’s urgings and traveled the better of Oriental Belle to be half a length ahead at the wire.

Mahmood Khan trained Nation’s Glory (China Visit-Safari Girl) who was winless from 23 starts scored a run-away victory in the division 2 of the Talakadu Plate, the opener of the day. Racing in front right from the word ‘go’ Nation’s Glory started to move away from the rest inside the last 400 metres to win by a lengthening margin of 8 ¼ lengths. Peppr, Glorious Moments and Dream Deo finished second, third and fourth respectively in a close finish. Hostess was withdrawn before the race.

Bipin Salvi trained Grand Success (Catienus-Maria T) justified the strong support with an easy win in the Varada Plate, the concluding race of the day. Racing in close second behind Winning Desire till the top of the straight, Grand Success surged forward under D.Gnaneshwar and stayed well till the finish. Dominica finished second while Sivanta and Its My Party filled the frame in that order.