AMAZING GRACE SHE IS! 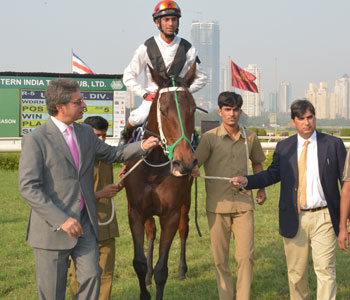 Amazing Grace proved yet again that she is the undisputed empress of the turf while winning the Jewel Royals Maharaja Jiwajirao Scindia Trophy (Gr2) with minimum fuss. The field was small and the opposition moderate. Nevertheless, Amazing Grace added to her reputation with a fine show of speed, stamina and temperament as she ran up with the pace, chasing Master Shifu and the stepped it up in the straight to win in a canter. Amazing Grace chalked up her ninth victory from eleven starts, piling up a winning streak of eight victories on the trot.

Master Shifu set off at a comfortable pace with Amazing Grace content to follow him about three lengths behind. The rest followed in single file with Jeremiah at the tail end of the field. The same order prevailed all the way into the homestretch.

Amazing Grace (Hurricane Run – Efrhina, Kunigal Stud) could have done anything. She could have waited, and she could have forged ahead or she could have toyed with the opposition. Trevor however, was not interested in playing games and cruised ahead to take charge with about 400 to go. He just let his filly do her own liking and she picked up speed just that little bit and there she was sailing smoothly ahead. Mountbatten and Keukenhof fought it out for the runner up berth as Amazing Grace proved elusive. Kukenhof wrested the second slot from Mountbatten, while Jeremiah moved up along the rails to send Master Shifu out of the frame.

Amazing Grace won as if just on an airing and holding back amply to reserve for bigger conquests ahead. The Invitation Cup is coming up a shade over two months from now and with Be Safe towering over the current crop, a nostalgic clash is certainly brewing.

For trainer Pesi Shroff this was a satisfying win. He has kept the filly in impeccable form and got her to achieve her first assignment of the season without any bloodshed. Shroff had earlier sent out two other winners and ended the day with a fine treble  – all on money favourites with Amazing Grace at practically non bet-able odds.

Gabriella (Footstepinthesand – Thiella, Equus Stud) was backed as though she had no business to lose even though this was her debut run. The market trends were spot on as they are on most occasions and Gabriella obliged, but not without a little drama.

All seemed regular as Bright Halo led them into the straight with Gabriella poised perfectly in second, just ahead of Geronimo. However, just when it seemed that Gebriella would stretch away, she started to drift out, perhaps having lost the grip on her bit. Zervan could do little as Gabriella shifted all the way to the outer rails. Warpath promised much midway in the straight, but his burst was way too brief. Geronimo wasn’t getting anywhere but he stuck around. Gabriella however, with the outer barricade stopping her drift, accelerated well and soon regained her momentum to dart ahead and score an impressive win. The one to note was Phoenix Fire. He was at the dead end of the field and a couple of lengths adrift. He moved the fastest in the business end of the race and beat the rest convincingly to snatch the runner-up slot with ease. He was a trifle lethargic early on and that perhaps dimmed his chances drastically. He is likely to be a live force when next out.

The Big Bull (Razeen – Forest Treasure, Usha Stud) looked a lot fitter after his last start victory following a lay off. He was right up in second chasing Holy Bull all the way into the straight. The rest of the runners were huddled close behind.

The Big Bull shot past Holy Bull early in the straight and Zervan eased him into the lead at a good clip. Caruso moved to second with Wentworth also putting in his bit. The Big Bull though had stretched out to a handy lead and never looked in any danger. Wentworth ended up chasing the winner, easily getting the measure of Caruso. Wentworth ran well and over a longer distance, looks ready to strike.

Made to Measure and Fibonacci Sequence was touted as the ‘jodi’ race of the day. The former on his runaway victory, was the firm favourite at 6/4 followed closely by the latter at 18/10.

Fibonacci Sequence was dominant right through the race, taking off and hitting the front soon on start. He kept a good gallop going and looked at ease all the way. Made to Measure was right up a close second until the turn. However, when push came to shove, Made to Measure faded out a lot earlier than expected. Fibonacci Sequence stayed clear of the rest and won comfortably in the end. Egyptiana and Zenofic made good progress in the straight to take the minor placing and finally Jewel arrived to pour more misery on the favourite nudging him out of the frame.

Merchantofvenice (Glory of Dancer – Maquillage, Nanoli Stud) was the surprise package of the day. With no latest form to go by, he was considered a rank outsider, quoted at longer odds. He defied all and sundry and timed his run to perfection and etched out a narrow win close home.

Ravello darted to the front at the jump and set about at a lively pace. Merchantofvenice was quick to settle close behind the leader alongside Wind Craft. Favorite Himalayan Queen found it too hot to handle and never rose from the mid-pack and ended up disappointing a lrge following.

Ravello fought with grit all through and into the final furlong, with Merchantofvenice constantly applying pressure. The others seemed outpaced by this duo. In the last 100 meters or so jockey Kishore Kadam riding vigorously got the B Prakash ward to surge ahead and pull off a well fought victory by just under a length. Don Corleone had his chances while stalking the duo in front in the early half of the straight, but he could not up his game at the crucial juncture and ended earning place money.

Trainer HJ Antia’s Exteme Love (Noverre – Extreme Contact, Sohna Stud) was backed with conviction in the last race of the day. He was however made to earn his victory by rank outsider Plan B who stretched the winner all the way. Plan B shot ahead and enjoyed a comfortable lead coming into the straight. Extreme Love, ridden by Ranjane, was up in the front bunch of four, Statuesque and Dark William being the other two.

Plan B kicked on in the straight and soon Extreme Love set about in chase. With a furlong to go, Plan B was kicking on determined to move on. Extreme Love started to inch closer and in the final 100 he gained ground briskly to topple the leader and win by half a length. Flynn progressed well to take the third spot from Dark William.

Skyjet (Glory of Dancer – Desert Sky, Anil Bodani Stud) produced a power packed finish to return victorious at nourishing odds. Chase the Ace tried his start to finish tactics but this time could not sustain all the way. He had a narrow lead coming into the final furlong with Blue Bay constantly getting at him. Skyjet made his bid from the outside and joined the battle. The trio fought it out and Skyjet got better at the finish to peg back Chase the Ace and Blue Bay close home. Soothsayer improved to end up with a place in the frame.

Argyle Pink (Noverre – Zeta Jones, Sohna Stud) scored a facile victory in the day’s opening race to set the tone for on money favourites obliging in the first five races of the day and also in the concluding event as well.

Bonobo led for most of the journey but when it mattered most, he faded out without a whimper. Argyle Pink took charge soon on straightening up and galloped away without encountering any worthwhile challenge. Azadegan tried hard to make a fight out it, but Argyle Pink with Trevor in the saddle proved too good on the day.

For the professionals, trainer Pesi Shroff sent out a fine treble and jockeys P Trevor and S Zervan scored a double each.