RAY OF LIGHT HOLDS ON BY THE PROVERBIAL WHISKER 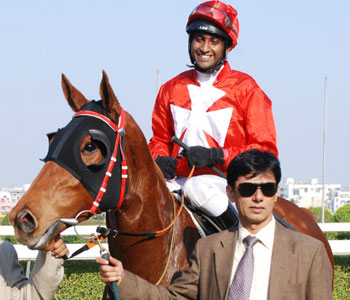 Trainer Laxman Singh leading Ray Of Light (A M Tograllu Up), winner of The Star Of Gwalior Cup

Laxman Singh trained Ray of Light (Ace-Radiate / Poonawalla Stud) just about managed to scrape through by the proverbial whisker in the Star of Gwalior Cup at Hyderabad on Sunday. The 4 year old chestnut filly raced a close third behind Ray of Hope and Santa Monica. Entering the last 400 metres jockey A.M.Tograllu started to work his way on Ray of Light from the outside and was in the lead quickly. Power Planet began to gain ground rapidly with Golden Arrow also storming home from the wide outside. Ray of Light’s lead started to diminish rapidly inside the last furlong with the duo rushing from behind and they were almost in a line going for the finish. The winning post luckily came to the rescue of Ray Of Light who had just managed to cling on from Power Planet. Golden was a ‘head’ behind in third.

T.Srinagesh trained Racing Tycoon (Ace-Difficult Doll) stormed home to lift the 1eme Centre Rolling Trophy, division I. Pacific Star set out on a start to finish bid over the seven furlongs trip and looked to be going well with 300 metres left from the finish. Pakat Pakat Pakat started to challenge from the inside and Racing Tycoon was getting stronger from the outside. Racing Tycoon picked up speed and sped past to go ahead and pull off a popular win. Laurel Canyon covered plenty of ground from the rear to beat Pacific Star for the second place. Pakat Pakat Pakat was fourth.

D.Netto’s ward In Reality (European-Grand Destiny) was the biggest upset of the day in the lower division of the Rolling Trophy. The 20-1 chance was taken to the front by jockey Akshay Kumar and the 5 year old gelding made every post a winning one. Great Warrior rallied on to finish second ahead of Prince Of Arabia.

Jockey A.M.Tograllu was the most successful professional for the day with a treble. He had ridden short priced favourite Time To Climb earlier in the day to give trainer Laxman Singh a double and then was astride Zoheb Shaikh’s Equaliser for a popular treble.  First timer Time To Climb (Carnival Dancer-Native Princess) won the higher division of the Loveable Princess Plate by a lengthening margin. Leading the pack from the start, Time To Climb started to draw away from them on the home stretch and won by almost a distance. Sefarina, Limitation and Wine N Dine filled the judge’s frame in that order.

Equalizer set off on a start to finish bid and won unchallenged in the higher division of the Cyndy Plate. Amazing Power after racing in third till mid-way up the straight finished second. Fenway Court and The Challenge finished third and fourth respectively. Khalis Gold was forging ahead of Amazing Power approaching the last 100 metres when the horse lugged in badly and the jockey in his effort to get him on even keel lost balance and was dislodged.

Trainer K.S.V.Prasad Raju saddled a double through Legend and Noble Heights. Legend (Top Class-Acquisition) upset the applecart of the favourite Roi’s Cruise in the lower division of the Loveable Princess Plate. The youngster was quickly out in front as the gates opened and called the shots. Inside the last 150 metres the favourite Roi’s Cruise was ridden out by Beuzelin to collar the leader but Legend had kicked on well under Kiran Naidu to stay ahead by a length and three quarters at the wire. Aakash Vani and Tinsel Town filled the judge’s frame behind Roi’s Cruise.

Noble Heights (Crown Jewel-Sidhiksha) score a maiden win in its eleventh start in the lower division of the Treasure Leaf Plate, the concluding race of the day. Racing in mid-field till approaching the distance post Noble Heights raised a resolute gallop to get the better of Royal Gold by a ‘neck’ and give apprentice Md.Sameeruddin his first win. Trus Haven and Nano Class finished third and fourth respectively.

Anupam Sharma trained Scholar Gypsy (Rebuttal-Yamuna) justified the on-money favouritism in the higher division. Scholar Gypsy who was winless from thirteen starts raced in about sixth position as they rounded the final turn. Royal Glow was being challenged by Gun Stream with 300 metres left from home when Scholar Gypsy came up with a fluent gallop from the wide outside to flash past and go away by two and a half lengths. Gun Stream just managed to beat Royal Glow for the second place.

Anupam Sharma earned his double when his ward Chocolate Soldier (Rebuttal-Cover Up) rallied strongly to beat Sterling finish in the lower division of the Cyndy Plate. Inside the last 300 metres Goldie and Nano Dame were in a duel and Chocolate Soldier was looking for a split between them. On finding the gap closing up jockey P.Ajeeth Kumar quickly guided Chocolate Soldier along the rails. In the meanwhile the favourite Sterling Finish had covered ground from the outside to get to the front but Chocolate Soldier made a strong bid along the fence to score an encore by half a length.