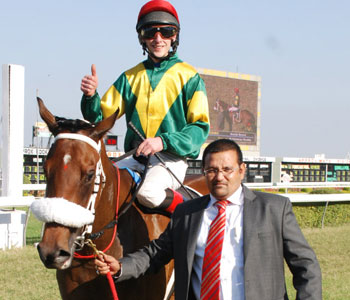 Racing continued to favour the followers of money at Hyderabad with seven clear favourites returning victorious in a card of nine races. The other two were also fancied runners and not rank outsiders. Trainers K.S.V.Prasad Raju, Laxman Singh and jockey J.H.Christopher were the professionals who scored a double each.

M.Srinivas Reddy trained Desire (Glory of Dancer-Another Star) clinched the Lingapur Cup that featured Monday’s races at Hyderabad. The 3 year old filly who has won almost every second start was in the money, being the second in demand at 2-1. Twenty five years old French jockey David Bruex rode a confident race on the filly to earn his first win on Indian soil. Desire settled easily behind the leader Azaiba and raced that way till entering the home stretch. Desire was unleashed from the outside by David Breux and the filly surged forward fluently and won comfortably by a length. Movie Moghual started to gain ground from the wide outside but could only get to finish second. Always Bullish finished third ahead of the favourite Carlton.

L.V.R.Deshmukh schooled Odysseus (Phoenix Tower-Aquila Oculus / Manjri Stud) made a smashing debut in the first race of the day, the Romantic Fantasy Plate. The son of Phoenix Tower hit the front quickly as the nine runners were dispatched for the sprint and travelled easily with Majorca, another Manjri produce in chase. Entering the last 400 metres Odysseus kept increasing the leeway and was 8 ½ lengths clear of Majorca at the finish with jockey P.S.Chouhan having an arm-chair ride on the youngster. Ryuzaki and Moon Walker finished third and fourth respectively.

Jockey P.Trevor who is on a high, riding winners at all the major racing centres in the country, piloted S.A.Shehzad Abbas’s ward Right Dimension (Multidimensional-Flowersoftheforest / Usha Stud) to a second successive win in the higher division of the Galactica Plate. Rio Rojo set the pace over the 2200 metres trip followed closely by Right Dimension. On entering the straight Right Dimension quickly headed to the lead and kicked on gamely to win effortlessly. Machine Gun tried in vain to bridge the gap and ended up to be the runner-up. Ice Barrier and Westminister finished third and fourth respectively.

Jockey Louis Beuzelin handled Donald Netto’s ward Parushram (Equitable-Knight Vision) superbly while bouncing back to winning ways in the lower division. The gelding after completing a hat-trick had tried his luck in the Golconda 2000 Guineas. Venturing over 2200 metres for the first time, Parushram was sent off as the favourite at 10-7 ‘on’. On entering the final straight Happy Guy stormed from second last position to grab the lead from stable-mate Star Player. Parushram was looking to make a bid inside the last furlong but found a wall of horses in front. On finding the gap along the fence opening up, Beuzelin guided his mount to go for it and with a terrific gallop settled the issue inside the last 100 metres. Star Player finished third ahead of Khosgel.

Dandelion (Gaswar-Bluegrass Gal) from trainer K.S.V.Prasad Raju’s stables pulled it off in the higher division of the Haridwar Plate. Dandelion showed plenty of speed to hit the front at start. Leading all the way Dandelion came into the straight with a lead of over two lengths with Bouncer and Rapidest in chase. With a furlong left jockey J.H.Christopher started to ride out Dandelion even as Rapidest began to close up the gap with a late surge. Dandelion had held on by a ‘head’ from Rapidest at the wire while Bouncer was third a length adrift.

Prasad Raju and Christopher combined to pick up a double through Grigori (Hymn-Steinby) in the Olympic Flame Plate, the concluding race of the day. Racing a handy fourth till turning for home Grigori shot ahead approaching the 400 metres board and won unperturbed. Maid For Love rallied on to beat the rest for the second place while Ponte Verdi took the third spot.

Laxman Singh trained Vijay’s Victory (Placerville-Dementieva) justified the favouritism in the Amaravathi Cup. Reflections set off in front and brought the field into view on the straight with Vijays Victory racing a close second. Passing the 400 metres board Vijays Victory forged ahead to take over the running and kept kicking on till the finish even as Wind Zoom and Silver Passion came up with a strong gallop to finish second and third respectively.  Golden Flash was withdrawn on veterinary grounds before the race.

Laxman Singh’s filly Dance To Destiny (Ikthyar-Maya) who had won four of her five starts proved to be a good sprinter yet again in the lower division of the Haridwar Plate. Roma Royal was speedy at start and set off to lead the pack. Inside the last 200 metres Fruit Roll Up and Dance To Destiny started to move closer with a strong challenge and the latter ridden by A.M.Tograllu sizzled past to seize the lead and justify the short price. Fruit Roll Up finished second in front of Roma Royal.

K.Satheesh trained Racing Ikon (Noverre-Isle of Mull) who had found one better in her previous four starts finally came good to score her maiden win in the Wishful Thinking Plate. The filly rushed to the front at start and staying there all the way, had a sizable lead as she came into the final furlong. Racing Ikon started to drift out of the straight course with 100 metres left but there was no threat from behind and wrapped it up comfortably. Racing Ruler finished second after chasing the winner all through the 1000 metres. Eva ended up third in front of Full of Life.