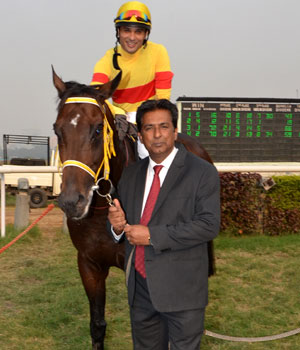 He’s an unassuming bay horse and you would be forgiven if you walked past him without giving him a second glance. But when you hear his name, it’s whispered with reverence.  And when he’s talked about  it’s in hushed tones of awe .  He’s called DANDIFIED and he lives and breathes in that rarefied orbit where only Champions  tread.  On Thursday the first day of 2015, he turns 7 years old. That’s an age when most thoroughbreds would have been set out to pasture. Dandified however is still on the Turf and it’s the opposition that’s put out to grass each time they line up to face him. As far as the Calcutta Turf and the historic circuit of the Royal Calcutta Turf Club is concerned,  he’s the undisputed champion who can best be described as a Phenomena.

Dandified is owned by Mr.Deepak Khaitan, trained by Champion Trainer Mr. Vijay Singh and ridden almost always by local Champion Jockey Christopher Alford. Bred at the Hazara Stud, and out of a Zafonic Mare – Dandoona, he represents the first Crop of the Champion First Season Sire Rebuttal.  The story began on the first day of January, 2011, he made his debut as a 3 year old Juvenile to win the Indian Produce Stakes  and followed it up with the Champagne and the Million. The bubbly has hardly ever stopped flowing ever since.  He’s reeled off TWENTY FIVE VICTORIES from 36 STARTS, punctuated with Six Graded wins and earned a whopping Rs.30,450,173. He’s been off the board just thrice in his entire life but what makes his achievements truly remarkable, is his versatility. He has won Graded Races from 1200 Metres to 2000 Metres. He’s matched strides with the best Sprinters and beaten them and run a close fourth in the 2013 Invitation over a Mile and a Half. That itself places him on the highest of pedestals.

They say the Hallmark of every great champion in any sport is the fact that they never really seem to be in a hurry. I guess the one exception to the rule would be the incredible Rafel Nadal. But look at the others. Be it Federer on a Tennis Court. Sachin Tendulkar at the crease. Mohammed Ali in the ring or Pele on the football field. All of them made you feel that they had all the time in the world to do what they had to do. Well Dandified has shown all that and more. He seems to glide where others lumber.  He goes from cruise control into a higher gear with all grace of a Ferrari. He has made that blistering turn of foot in the closing stages of a Race his own special individualistic trademark.

Of course the cynics will always maintain that he did nothing of merit outside Calcutta. Well they do have a point, but to counter that one has to maintain that if you can’t take Mohammed to the Mountain, you have to bring the mountain to Mohammed. The mountain consists of some of the top horses in India who ventured across to Calcutta and had to eat dirt when they faced him on his Turf. Yes Horses have often showed that they were made for courses and Dandified is a classic example to that rule.

Owner Deepak Khaitan has owned some of the greatest horses that have graced the Turf, and Dandified while not laying claim to being the greatest must certainly be one of his favourites. He has raced for over four year now and he just seems to get better and better. He’s one of the most genuine customers that Vijay Singh has ever had the good fortune to train and being the modest Champion Trainer that he is all the accolades he says should go to Dandified. But the fact is that Vijay knows Dandified like the back of his hand. It’s a tribute to him that he has kept him going. Jockey Christopher Alford too is blessed in that it’s almost as if Dandified speaks to him. He gets the son of Rebuttal to turn in some truly mind boggling performances. That’s probably due to the bond and the compassion which binds the two together. Just how much the boy cares for the horse came to the fore when he went down to stablemate Snowdrift earlier in the season. Once he saw he was beaten he didn’t punish him and he was patting him and consoling him as they went past the Winning Post.  It made a difference because Dandified bounced right back to win his next two starts.

So as we get ready to celebrated the first day of the New Year, lets raise a toast to Dandified – Calcutta’s own Champion who came out onto the Racetrack this very day albeit four years ago. May his shadow never grow small.