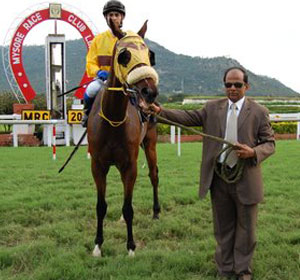 Even the most ardent fans of the Ganapathy stable could not have visualized the ease with which his charge Star Assembly won the Chief Minister's Gold Cup at Mysore on Monday. He made his four opponents look pedestrian while registering a bloodless victory in the day's feature. It was a nine-furlong handicap for horses in the highest Class. Top-weighted Timeless Treasure, Flaming Lamborgini and My Friend Paul had already won in Class I, while the two younger horses Gershwin and Star Assembly were yet to do so.

The last-named had the best form, as he had won over a similar trip in Bangalore Summer. Furthermore, he was handicapped at the bottom of this bunch and was set to receive five kilos and more from his rivals. The bookmakers were quick to install him as a favourite, but those racegoers who doubted Star Assembly's abilities started backing the others. With money flowing in the direction of Timeless Treasure, My Friend Paul and Flaming Lamborgini, the picture got hazier as the runners faced the starter. One look at the final odds was enough to realize that this was going to be a close affair. What ultimately transpired on the track was totally different. Gershwin, Timeless Treasure and Flaming Lamborgini charged to the front and stayed there till the runners took the rising ground and made their way towards the home turn. Imran Khan and Star Assembly looked extremely comfortable behind the leading group, and there was no doubt that he was travelling the best of the lot.

My Friend Paul was always under pressure to stay in touch with the others. The leading trio began to get tired near the bend and their shortening strides saw them rolling off the rails. It was at this very moment that the favourite made his expected move. Imran released the brakes on Star Assembly, and the game horse responded brilliantly. He lengthened his strides and charged towards the winning post. In a matter of seconds, the race was over. The jockey looked back repeatedly to check for any threats, before easing his mount.

The duo cantered past the winning post and finished ahead of a hard-ridden Flaming Lamborgini. The others led by Gershwin took their time to finish the race. Star Assembly (Alnasr Alwasheek – Name Of Love) has struck good form and looks capable of winning another "staying" race in the near future. Imran Khan rode another brilliant finish on Karan Singh's Regal Ransom (Major Impact – Mystique Smile) and completed an extremely popular double for the afternoon.

Racing amongst horses in his own age group, Regal Ransom managed to get the better of rank outsider Refuse To Bend and a heavily gambled Born Beauty. Riding up with the pace, Imran allowed his mount to have a clear passage for most of the way. He allowed Pinaakini to go ahead near the bend, before he began urging his horse. With the support of the inside rails, Regal Ransom got stronger in the final furlong and stormed clear of the pack. The talented jockey made free use of his whip and steered this horse to a comfortable victory over the others.

Born Beauty took time to extricate herself from a troubled passage, but by the time she managed to do so, it was too late. She will be too good to miss in a similar event later in the season. The Hotel RRR Gold Cup was the added attraction in the day's card. A real competitive field of 12 runners appeared in the paddock. Demoted Lowndes Square, Chintz and Captain's Lover were strongly fancied by their respective camps, and were sighted at the top of the betting boards. Some late support for Needofthehour saw him joining the pack. The speedy Youre A Legend set a strong pace from the seven-furlong marker and showed the way to Chintz, Grand Topaz and Lowndes Square.

Needofthehour and Captain's Lover got stuck on the rails and their progress was hampered by a pair of no-hopers in front of them. Chintz (Burden Of Proof – Littleover) seized the advantage at the top of the straight and began her march towards the winning post. Needofthehour extricated himself from the mess and went in chase. At just about the same time, Captain's Lover moved menacingly towards the inside rails. Apprentice Nausad Alam continued to push Chintz in front, and the filly lasted out to win from Captain's Lover, Needofthehour and a fast finishing Lad's Gladiator.

Nausad Alam looks like the best apprentice at the moment, as he has ridden six winners in the last few weeks. The rider of Captain's Lover chose to raise an objection against the winner. Gaurav Sapra felt that Chintz had obstructed his path in the final stages of the race, and Nausad Alam had failed to correct her inward drift. The stipes felt that the drift was accidental, and as the winning margin was quite comprehensive, there was no need to alter the announced result. The two divisions of a class IV sprint witnessed a lot of excitement. In the upper division, a king-size gamble was landed by the Md Khan camp with Preset (Diffident – Star Festival). This six year-old have been brought down a couple of classes over a period of time.

He was supported all morning, and his odds kept shortening with the passage of time. There was no doubt about his ability, as Preset had raced against, and beaten some top-class horses in his younger days. In the hands of rookie Tauseef, the horse took a good jump. The boy tried to hold him back in fourth till turning for home. In the process, Preset stumbled and almost came to his knees near the three-furlong marker. However, all’s well that ends well. Preset gained momentum thereafter, and led into the final furlong. To the delight of his numerous supporters, he was able to hold a late challenge from Jamaican Bolt. Early leader Carnival Of Joy plodded along to retain his third spot. John-ridden Approach received similar support in the lower division.

He was backed down to odds-on favouritism as most felt that he was running against poor opposition. Some excellent track trials and his excellent paddock looks added to the aura around this runner. A huge groan greeted the start of this race. The favourite was extremely lethargic at the gates and lost a lot of ground at the start. He could never recover from that handicap, and despite John's belting, finished in the ruck. TS Jodha-ridden All Rise (Puerto Madero – Festival Flame) made all the running to score fluently from Gambit and Baffled. The jockey astride the last named was totally disinterested in the proceedings, but to his surprise, the horse dragged him into third place. Baffled advertised his form and fitness, and can win for the asking. Byramji's Yamas (Pennine Ridge – Sober Mind) was another favourite who carried the public purse to victory.

With the odds against second-favourite Atomic Queen rising rapidly, it looked as though there was only a single trier in this race. However, some late support for Rising Queen ignited the interest in this race. Yamas travelled comfortably in third place before Ashhad Asbar decided to make his move. He eased the horse into a comfortable lead near the bend and rode him relentlessly thereafter. Rising Queen responded to John's urgings, but could do no better than finishing a respectable second. The others led by Chevvy were more than a distance behind the two of them. The only other race in the day's card was won comfortably by Dhariwal's Clear Mandate. This well-bred horse had failed as a short priced favourite in his recent start, when he had faced a group of maiden runners.

His trainer decided to campaign him in handicap company, and the horse was assigned the top weight in Class IV. Even though he was giving weight to the field, punters refused to look beyond him. Clear Mandate (Burden Of Proof – Clear Cut) started as the shortest priced on-money favourite in the day’s card and obliged with a measure of comfort.

He gave jockey Ryan Marshall an armchair ride to victory. The nice-looking chestnut finished well clear of Happiness, Born To Perform and Rising Rainbow. Now that he has found his winning ways, Clear Mandate must be supported with confidence in his future starts.