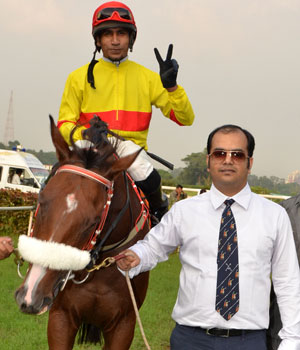 Trainer Manvendra Singh Leading Artesia (B Mahesh Up), Winner Of The Monsoon Cup

The race for Monsoon Cup saw a sensational finish despite a small field of four runners. Installed as the firm favourite, Vijay  Singh-trained Fly Like The Wind went down close home to owner-mate Artesia (Multidimensional-Trois Etoiles/ Usha Stud) from the yard of Manvendra Singh. An elated top-weight jockey B. Mahesh shot up from his saddle as the five-year-old mare passed the winning post and waved his whip in the air. The third horse in red-and-gold colours, Aviette, set the pace till the straight before the favourite took over and tried runaway tactics. However, Mahesh was alert to his task and kept Artesia in close touch before overhauling the favourite close home.

The afternoon also witnessed a brace of wins for trainers Arti Doctor and Manvendra Singh. The latter completed his double in the very next race when Midnight Magic (Gaswar-Minnie Mouse/ Lingwood Stud) produced a winning gallop on the wide outside to get the better of fancied runners Raw Silk, Significant and Annie Oakley, The winner, available at odds of 9/2, was ridden with great flourish by Hindu Singh.

Shafiq Khan’s Chennai Express (Ivory Touch – Queen Of Karazan/ Mare Haven Stud) won the opener of the day, The Avaglow Handicap, in dramatic manner. The grey gelding with Afzal Khan astride was languishing in the rear of the field for most part and only put on his galloping shoes in the final furlong, to come through like a bolt from the blue (excuse the cliché) and sail past Uptown Girl who was shaping like a winner in the straight. What was even more astonishing about Chennai Express’s win was that he had no form to go by and his win turned the form-book topsy-turvy.

Arti Doctor led in two winners during the afternoon. The first of her winners were Lucky Streak (Tariq-Silken Magic/Equus Stud) who closed as the 12/10 favourite in the Replicate Handicap. B. Nikhil piloted the colt, who raised a late gallop to get the better of Sweet Suspense who was right there at the finish but missed out narrowly.

Arti wound up the afternoon with a big gamble on Bindass (Win Legend-Integrate/ Dashmesh Stud) who made every post a winning one in the hands of 4kg-allowance apprentice Ranidan Singh - who will now be eligible for a whip, having completed ten winners.

Jockey Christopher Alford tasted success with Vijay Singh-trained Santero (Chevalier-Santarelle/) who won the Roll N Twist Cup with a degree of comfort. Another Glory was a faraway second while Kanha lost ground at the start, other than which he may have fared better.