GLAMOROUSLY STAKES HER CLAIM TO 1000 GUINEAS 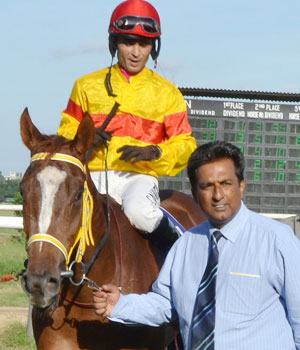 The opening day of the Calcutta cold weather season proved to be fruitful for a majority of followers of money as four firm favourites obliged in a card of eight races. They were Adalicia, Pujarin, Glamorously and Arminius. The first two named were from Arti Doctor’s yard while the other pair were from Vijay Singh’s stable. The trainer who created a wave with a lucrative double was none other than the wily Javed Khan who led in Xperience (6/1) and Conquest (5/1).

The main event, The Bahrain Cup, run over 1400 metres,  saw Glamorously (China Visit – Glamorous Spirit/ Usha Stud) running at a friendly mark after her runaway victory during the lat monsoon meet. There’s no doubt that the handicapper’s blanket scale-drop by 3kg has encouraged and aided three-year-olds to perform better. There are those in that line of work who reserve this end-of-season action for older horses only but it is entirely at the discretion of the individual concerned. If the professional concerned feels that a blanket scale-drop will be fair to all concerned and lead to improved racing, then so be it. After all, the proof of the pudding lies in the eating and the fact that older horses were also aided by this ‘drop’ was proved when five-year-old Passionate was gambled heavily by the connections and put it across three-year-old Ivy in the second race of the day.

Coming back to the day’s feature, the Vijay Singh-schooled filly with Christopher Alford astride, lifted the Bahrain Cup with a degree of comfort. She thus staked her claim to the Calcutta 1000 Guineas to be run three weeks from now. As of now, her credentials give her the privilege of being tagged as the ‘ante-post favourite’.  The top-weight Aashikaara ran a fairly good second whereas the second in demand in the ring, Beyond Expectation, ran well below expectation.

Trainer Vijay Singh and C. Alford completed a brace when the favourite in the Actress Handicap, Arminius (Hard Spun-Guy Grand’s Girl) made every post a winning one. The rest of the field including much hyped Godstouch was left struggling while top-weight Dancehall Days left all her chances at the gates.

Visiting jockey PS Chouhan made no mistake atop Arti Doctor-trained Adalicia (China Visit – Altimara/ Usha Stud) who bagged the season opener without too much trouble. The runner-up A Ma Shukum displayed a certain amount of consistency to run a another good race. Top-weight Fashion Icon is improving steadily and will be worth keeping an eye on.

Arti’s other winner of the day, Pujarin ( Noverre – Sloats Burg /Sohna Stud) was taken to the helm of affairs early by jockey Kamlesh and won impressively by keeping at bay her closest rival Astral Dancer. However, the fact that the latter was conceding 6.5 kg to the winner gives her the upper hand if they both decide to compete in the 1000 Guineas.

Trainer Javed Khan has always been a shrewd customer and his placement of his two winners Xperience and Conquest proved that point. The first named is a speedy filly by Diffident out of Avignon (Yeravada Stud) and she won the lower division of the Secret Love Handicap as she liked with apprentice Jorawar Singh in the saddle. Chouhan atop the favourite Romantic Society tried his utmost but to no avail. Nevertheless, she will be worth keeping an eye on, possibly over a longer trip. Javed then tied up the busy afternoon when apprentice Jorawar partnered Conquest ( Mull Of Kintyre-Shfoug/ Sohna Stud) to a smashing victory over Significant and Mister Positive in The Calorescence Handicap.

The costliest failure of the day was another much hyped filly – Adrestia. She had all the chances but failed to match strides with Ristretto (Top Class – Bold Babe/ Mukteshwar Stud) in the race for Annella Handicap. Mind you, she is bred-in-the-blue and must be followed on the track as greater things may be in store for her as she matures. Rutherford-trained Ristretto was ridden with a certain degree of confidence by the stable’s retained rider Ashhad Asbar who skated clear after collaring Bengal Tiger despite shifting off a straight course. Changing his whip hand was crucial to ensure that the on-money public choice on his outside faced no interference.

Apprentice Ranidan Singh has earned the confidence of many a trainer and owner. The stable of Vikash Jaiswal used him fruitfully to land a superb gamble with Passionate (Epicentre-Passion in the Park/ AB Stud) in the upper division of The Secret Love Handicap.