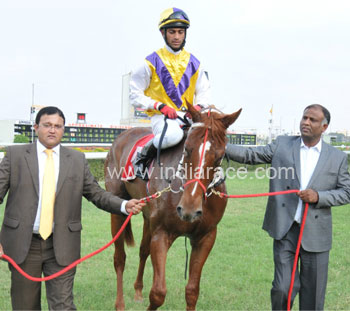 First timer Breezeofthesouth (Dancing Forever-Queen Of Normandy) displayed resilience while winning the richly endowed Deccan Juvenile Million, a terms race for maiden 2 years old horses. Manoveg set a strong pace and M Srinivas Reddy trained Breezeofthesouth settled to race on its haunches right from the start. Approaching the last 300 metres Breezeofthesouth forged ahead even as Elegant Simplicity tried o make way between horses. Eoro Zone who stayed last till the last 400 metres started to gain ground from the outside  and came charging towards Breezeofthesouth but jockey Trevor showed his mastery while takeing the debutante to the winning post half a length ahead. Elegant Simplicity was third another half a length away and Exclusive Wind fourth.

Trainer S.S.Faisal Hassan pulled off an upset through Cloud Dancer (Don Michelletto-Sky Bright) in the Baile Lalith Pershad Memorial Cup. The grey gelding raced handily in third or fourth till the top of the straight and moved up to challenge Flower Roll Up. The favourite Baashagar also came up with a strong gallop from the outside and the two surged ahead of the leader and a keen fight ensued between the two. Despite the best effort of Trevor, Baashagar failed to get to Cloud Dancer and lost out by half a length. Silver Passion beat Flower Roll Up for the third place. Blue Eyed Babe was withdrawn before the race.

Jockey Imran Chisty rode Anupam Sharma trained Ashwa Raftar (Sedgefield-Slam Strike Jai Govind) to a facile victory in the Malvado Plate. Chisty held his mount in second behind the leader Khan Sahib. On entering the home straight Ashwa Raftar took over the running with a fluent gallop and got stronger even as Handy Man and Palisades Park tried to make a race of it. Khan Sahib fell back to finish fourth.

Trevor rode two winners for trainer K.S.V.Prasad Raju and took his day’s figure to three wins. Dublin (Admiralofthefleet-Captivating / Kunigal Stud) won the Meghalaya Plate, the concluding race of the day. Racing with the front bunch till the top of the straight, Dublin streaked through to take over the running and held a good lead till the winning post. Romantic Fire and Columbus were finishing on fast but the fight was only for the minor places and they finished in that order behind the winner. Red Express was fourth.

The Blue (Admiralofthefleet-Favoured) justified the favouritism in the opener, the lower division of the Manjira Cup. The Blue raced fourth behind Majorca, Tokyo Bloom and Roma Rouge. Trevor started to work his way on the favourite but the gelding took some time to gallop with the top weight of 62.5 kilograms on its back. Once shown the daylight between horses, he stormed ahead and the race was well over much before the winning post. Roma Rouge rallied on to take the second spot. Wonder Eye and Tokyo Bloom finished third and fourth respectively.

Prasad Raju won the higher division as well through Legend (Top Class-Acquisition)to complete a treble for the stable. Legend, a 10-1 shot won in a close finish involving three horses. Angel Bell out in front from the start was challenged by Gangadhar inside the last 200 metres. Legend also started to creep up with apprentice Md Sameeruddin pushing hard and stuck its neck in front at the finish. Gangadhar was second and Angel Bell third, a short-head away.

S.A.Shehzad Abbas trained Princess Rose (China Visit-Adorer) scored a maiden win in the Track Lightning Plate. Princess Rose took a good start and jockey Imran Chisty decided to settle in second when Caruba went ahead. On entering the straight Princess Rose shot ahead quickly and won comfortably with Sefarina moving into the runner-up berth. Coruba was third and Upon A Star fourth.

Laxman Singh trained Naamdhari (Hurricane State-Aflora) carried the public purse to a clear win in the Silky Baby Plate. The 4 year old shot to the lead on top of the straight and drew clear. Sea Change, Chocolate Gredy and Killer Instinct filled the judge’s frame in that order.