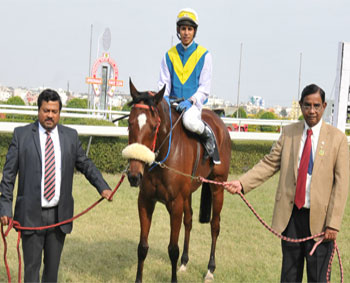 L.D’Silva trained Sherman Oaks (Multidimensional-Amstel / Usha Stud) who had found one better in her last three outings finally managed to make the grade in the higher division of the Mysore Race Club Cup. Sent off as the favourite among the eight runners for the mile trip at 12-10, Sherman Oaks raced in about fifth till turning for home. Carlton and Winjoy were battling it out in front and Aventus was looking to sneak in between them as they approached the last furlong. Sherman Oaks made her bid from the outside and joined Aventus who had by then found way to be in front. The two matched strides in the last 100 metres and Sherman Oaks had her ‘head’ in front at the finish. Winjoy finished third ahead of Golden Essence.

Anupam Sharma’s Brahmani (Hymn-Jukebox) scored an encore in the lower division by a short margin. Settling nicely in about second or third behind Movie Moghual till the last 300 metres, Brahmani forged ahead to take it up. The favourite Time For Fun came up strongly in the last 100 metres, inching closer with every stride but Brahmani held on gamely by a ‘short-head’ at the wire. Power Planet and Santa Monica finished third and fourth respectively.

Trainer Anupam Sharma had a good day, sending out three winners from the stable. Rose ‘D’ Mumtaz and Blue Eyed Babe were the other two victors, both ridden by K.Mukesh Kumar. Rose ‘D’ Mumtaz (Royal Gladiator-Mount Rose) who was a maiden from 13 starts won the Secunderabad Cup. The filly was nicely into the lead within the first furlong from the outside. Accelerator rallied strongly inside the last 200 metres and closed the gap but jockey Mukesh Kumar went for the stick and riding out vigorously stretched clear by three parts of a length at the finish. Amethyst was third another length and three parts away.

Blue Eyed Babe (Kheleyf-Java Lady) justified the favouritism in the lower division of the Fire Haven Cup in fine fashion. Travelling in about fourth till the top of the straight, the 5 year old filly came up nicely from the outside and went sweeping past the front runners. Gayle Force, Rebellion and Par Excellence were second, third and fourth respectively in a close finish.

S.S.Faisal Hassan trained Italian Cypress (Tariq-Passion) won the higher division in a facile manner. Held back in second last till the top of the final turn, Italian Cypress improved gradually to make a bid from the outside. When let go inside the last 300 metres, the gelding produced a sizzling gallop to down the efforts of Dancing Farha. Fenway Court was third and the favourite Flower Roll Up a tame fourth.

L.V.R.Deshmukh’s 4 year old filly Masti (Echo Of Light-Mustarde) had it easy in the Roman Beauty Plate. Jockey P.S.Chouhan took the favourite Masti to the front as the gates opened and the 13 runners settled down. Princess Hina was quickly alongside to give company. Inside the last 200 metres Chouhan alerted Masti and the filly quickened readily to skip away even as Princess Hina made a vain bid. Arabian Mountain was third in front of Exclusive Monarchy.

Jockey P.Trevor rode Sprint Legend (Street Boss-Tafcar) to a start to finish victory in the division II of the Northern Dancer Plate, the concluding race of the day. The ‘odds on’ favourite Sprint Legend showed plenty of speed to hit the front from the innermost draw. Leading all the way, the 5 year old was given a couple of cracks inside the last furlong to keep going and Sprint Legend did well to stretch out comfortably. Rock Heights, Rubyonrails and Big Boss filled the judge’s frame in that order.

Zoheb Shaikh trained Egyptian Wind (Equitable-Alam Jehan) completed a hat-trick in the opener of the day, the Singh Plate. Royal Glow set the ball rolling and Egyptian Wind tracked her close behind. Royal Glow was relentless till the last 100 metres but jockey A.M.Tograllu kept riding out Egyptian Wind and forged ahead by quarter of a length in the last few strides of the race. Pakat Pakat Pakat finished third another two lengths away.