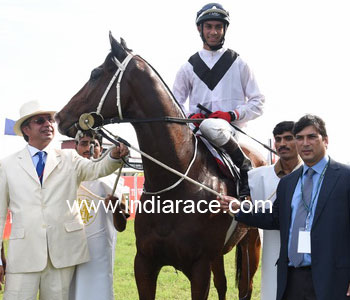 After losing out to Dancing Prances in his last start by the shortest of margins despite the fact that he encountered rough passage at a crucial juncture, Adam on the eve of the Hindu Sprinters’ Cup looked a picture of fitness and the Vijay Mallya owned champion sprinter justified his top billing emerging the fastest horse on the circuit, producing an astounding gallop in the hands of champion pro Trevor Patel to snuff out the challenge of the ten to one long shot Dancing Phoenix while Dancing Prances, it appeared had lost his galloping shoes, failing to beat the Chennai heat and eventually performing below par.

A delighted Pesi Shroff disclosed that the champion sprinter who he rated high peaked right and after his superb effort in Mumbai was the one they all had to beat.

“It makes the task easy when a horse starts to do everything right and hits the peak before a major event and Adam just did that,” said Shroff pointing out that Guindy has proved to be a happy hunting ground for the champion trainer who booted home Storm Again in the Indian Invitation Cup while donning the Vijay Mallya silks. Adam clocked a time of one minute 10.18 seconds which bettered the existing record of Imtiaz Sait trained Blue Horizon (1:10.37) registered in 2005.

The other feature, the gruelling stamina sapping Villoo Poonawalla Stayers’ Cup delighted the Hyderabad contingent, the Vittal Deshmukh-trained Tintinnabulation cleverly piloted by leading pro Pradeep Chouhan stealing a march at the top of the straight and gallantly holding onto the advantage gained to retire home a deserving winner.  The Bangalore hopeful Toroloco who was seen finishing purposefully at end finished a game second ahead of the favourite Agostini who raced in patches, initially failing to keep pace before producing his best only after the winner was spotted long before the final furlong.

Immensely pleased with the tactics he employed that brought home the desire result, Chouhan revealed that Tintinnabulation was keen and travelled nice and easy all through the exacting trip and he decided to play `catch me if you can’ pushing the winner ahead the moment the field negotiated the final curve and that produced decisive at end, the champion stayer quickening enough to assume command and put the issue beyond doubt in the final furlong.

Suraj Narredu astride Toroloco caught napping did his best in the final furlong but that was just not good enough to stop the Deshmukh ward from chalking out a deserving victory. Trainer Irfan Ghatala said that Toroloco was in the best of health and could have well emerged the winner had Suraj alerted him to the task ahead a little earlier than done.

M P Mahesh-trained Aayan struck it rich in the Hyderabad Race Club Million. The well-bred Quaker Ridge despite racing after a long-layoff garnered the maximum support.  Trainer Arjun Manglorkar said that he was pretty confident of Quaker Ridge’s success but the fact that he hadn’t had a run after his success in Mysore went against him.

“He looked a winner the moment he hit the front at the top of the straight but lacked the racing fitness when he came under pressure from Aayan who fresh from his two victories at his parent-centre (Bangalore) again produced his best to complete a hat-trick of wins.

Sirajuddin trained Ghoonj smashed the opposition in the Win T V Group Japan Cup, a race for juveniles. A confident Sirajuddin had told a couple of his followers that he had a top quality horse in Ghoonj and that he had the ability to beat the best in the field. Ghoonj proved him right by beating the field with ease including the on money favourite Lord Darlington who performed below par. Jockey David Allan was reportedly injured when the horse jumped out awkwardly and badly hurt his ankle ligament.  In fact, the Padmanabhan camp was doubtful that he would be able to partner Desert God in Sunday’s Invitation Cup race though David was not looking out to miss out on the action in the Champion Of Champions event.

Trainer Arvind Ganapathy who has made it a habit of taking his wards to other centres and win consistently, brought off a coup through Majestic Style by cleverly placing his grey in a modest field competing in the Delhi Race Club Million. Full marks to Sandesh for a brilliant ride while jockey Pradeep Chouhan encountered traffic problems on the runner-up Time And Space and this made a critical difference to the outcome of the race.

Later Ganapthy won through Omber Blaze, the Mysore Race Club Million. Ganapathy was very sure of the success of his ward and the followers of the trainer were happy to grab the opportunity to back the horse which resulted in the price crashing in the betting ring. Sandesh yet again produced a copy book effort to the delight of the big bettors who had increased their volume of their investment on the Ganapathy ward. Babushka chased the favourite unsuccessfully and finished second leaving the Irfan Ghatala disappointed yet again.

Pesi Shroff trained Captain Courage brooked no opposition as he easily thwarted the bid of Light of Magic to win the Bangalore Turf Club Million.  The Hyderabad mainhope Healer managed to nose out Castle Key for the third place.

The opening race of the day, the Tamilnadu Race Horse Owners Association Million, was the only race where the locally trained Wild Nexus was successful. The well backed horse had the race won long way from home justifying the huge volumes of money that the nine-year old attracted in the betting ring.  The winner is trained by Fahad K. Strawberry Dream finished second ahead of Lightening Thunder.