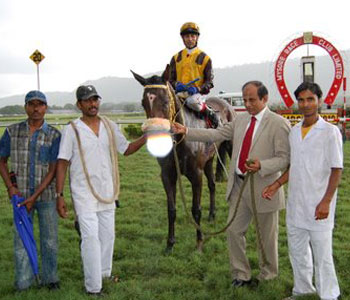 Frequent spells of rain over the last few days at Mysore had literally soaked the local race track, and the "going" at the start of Thursday's programme was termed as "soft". The timing's clocked in the first couple of races were slower than normal, and only the fitter horses managed to gallop past the winning post. Quite a few runners actually came to a crawl in the final furlong while completing the formality of finishing a race. A sharp shower after the third race left puddles all across the Club premises. The jockeys were quick to protest, as they felt that riding in such conditions could be life-threatening.

The authorities opined that in the past, they had conducted racing in similar circumstances. Three more races, including the day's feature, were held without a problem. Merely seconds before the commencement of the sixth race, the rain began to fall again. The runners were flagged off in poor visibility, and by the time they returned to the unsaddling enclosures, the Stewards Of The Mysore Race Club had decided to cancel the rest of the day's programme. The track had taken a heavy pounding during the afternoon. Large chunks of loose turf could be seen at various spots in the backstretch, and if the rain continues to fall through the night, it could jeopardize the nine-event card slated for Friday.

The YR Puttannaiah Memorial Gold Cup, a sprint for horses in Class II, was slated as the day's feature. Twelve acceptors including last outing winners On A Roll and Princess Nero faced the starter. John ridden On A Roll received the maximum support in this race. The fact that this horse was drawn on the inside, coupled with the prime form of his rider S John, led to this scenario. It was felt that this speedy customer would go to the front, and it would be difficult for the others to catch him. This plan worked perfectly till the horses reached the distance post.

On A Roll showed the way to Superb Style and Ansonia till this stage. With the two closest challengers failing to quicken, the leader managed to open up a fair lead into the final furlong. It was exactly at this moment that the Ganapathy-trained Ready To Mingle (Royal Gladiator – Stealing Beauty) began her charge. The mare thrived in soft underfoot conditions and got stronger with each stride. Under the relentless pressure of Imran Khan, she got the measure of On A Roll and strode away for an impressive victory. Three year-old Princess Nero arrived late on the wide outside to finish an eye-catching third.

The added attraction in the card was the running of The Mrs Ammani Ramachandran Memorial Cup. Racegoers were fairly certain that it would take a stout stayer to win this mile handicap. Lokanath-trained Super Spear (Classic Tale – Special Response) appeared to be an outstanding runner in this event. Apart from being the youngest participant in this group, the mare was known for her stamina. She had won earlier in her career over a mile and a quarter, and had ended a smart second in her previous start.

With everything going for her, Super Spear was backed to the exclusion of her rivals. The even-money favourite chased Holiday Date till the top of the straight before hitting the front. PS Chouhan eased her into the lead before applying further pressure. She responded brilliantly to his strong handling, and went away for an outstanding victory. The official verdict was a "distance", but the real margin of victory was close to 20 lengths. The Force, Turf Raider and Lester finished close to each other while filling the rest of the frame. The day started with a couple of races for horses in the lowest Class. The day's opener gave an opportunity to apprentice Kiran Rai to display his riding skills while gaining his maiden triumph.

He pushed Prithviraj's Baton Rouge (Alnasr Alwasheek – Astor Place) to the front, and managed to keep him going till the very end. The duo managed to hold a strong and belated challenge from Aaj Tak. The latter fought valiantly before accepting defeat. Jagdeesh's longish absence from the saddle had rendered him slightly rusty, as he was unable to do full justice astride the runner-up. Favourite Chesterford Touch arrived late on the scent to end a fair third. Trainer Ranjeet decided to run his charge Happiness (International – Claribel) in Class V. The three year-old filly had been running close to some highly regarded horses in maiden company.

She had been missing the frame by extremely narrow margins. A lucky drop in "ratings" enabled her to compete against a mediocre set of runners on Thursday. Happiness was another popular runner to win today. She carried the public purse to an effortless pillar-to-post victory, and brought cheer to those who had supported her with confidence. A late finishing Whisper Valley got up in time to displace Stellar Star from the runner-up berth.

Another public choice that thrilled her supporters was Spark Of Silver (Juniper – Cristina). With some late support coming in for King's Admiral, the odds against Spark Of Silver had started to rise alarmingly. Those who had backed her at a short price were seen regretting their decision. The filly had won the only race that she had run in her career, and was attempting to maintain her "unbeaten" record. To the dismay of her fans, Spark Of Silver lost ground at the start and trailed the field for most of the way. Chantilly Jewel, King's Admiral and Sure Speed seemed to have this race between the three of them, as the leaders made their way towards the winning post. By a strange quirk of fate, Spark Of Silver devoured ground from the back and joined the issue. She produced an unbelievable burst of acceleration through the middle to sail past a bunch of bewildered opponents.

John chose to ride her hands-and-heels and this seemed to suit the filly. It is possible that the trainer may have advised him to refrain from using his stick. On the basis of this performance, it is easy to confirm that Spark Of Silver is an exceptionally gifted specimen. John completed a quick double by winning the very next race with Sher Dil (Ikhtyar-Ivoirerie). The talented youngster has been riding with a lot of confidence, and is currently leading the jockey's tally. His only problem seems to be his weight, which has been rising with each season. His efforts astride Sher Dil were praiseworthy. He literally coaxed the tired horse to keep his head in front of a fast finishing Mister Trooper.

Sher Dil disliked the underfoot conditions and began to roll sideways as they entered the final furlong. John brought him back on an even keel and used his stick with a lot of maturity. Mohd Khan's ward justified favouritism by winning in a blanket finish from Mister Trooper and a vastly improved Romantic Design.