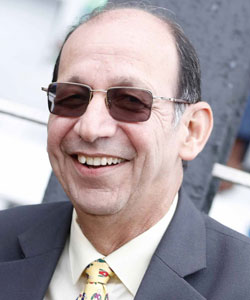 Indian Racing has not had much to cheer or write home about in the course of the last few years as it plods on with mundane monotony. But the clouds of doom, that many of my pessimistic friends feel has engulfed the Sport nowhas a silver lining. There’s light at the end of the tunnel and bathed in it is the Madras Race Club.

(MRC) one of the oldest Turf Authorities in the country is poised at the crossroads of stardom. If all goes by the script this could well become the new Mecca of the Indian Turf.They have the potential. They have the funds. They have the infrastructure. To put it in a nutshell MRC has a lot going their way and the sky could be the limit regards the future.

The first step in the right direction is the MRC AUCTION SALE scheduled to be held just after the running of the South India Derby – on the evenings of 15th and 16th January to be precise. It has attracted 155 Entries and it’s heart-warming to see that some of the leading Stud Farms in India such as Kunigal, Poonawalla, Dashmesh Yeravada and Sans Craintes to mention a few have put their weight behind it.

What makes the 2017 MRC Auction Sale truly unique is the path- breaking decision taken to sell all horses in the Auction Ring. It will help relive those enigmatic days of the past when the legendary A.F.S. Talyarkhan (Bobby to his friends) would conduct the Sales in the Paddock of the Mahalaxmi Racecourse over a span of three successive days. It is indeed a bold step to usher in the utmost transparency and MRC needs to be complimented in taking this route which could well revolutionise the Sale of Horses in India.

Two Year Old Horses form the foundation on which every Race Club hopes to build and MRC whilst opening this 2017 Sale to Professionals and Owners across India will be thinking of how to encourage the Local Chennai based Owner to pick up horses. By hosting an Auction in their own backyard is the first step. But in addition to that Madras Race Club is looking at a host of incentives to entice the Local Owners and even those based outside to buy and own horses under MRC Rules.

Chennai based owners registered under MRC may receive the benefit of individual Loans from the Race Club subject to buying horses in the Auction Ring. If the Loans are sanctioned four to five individuals can club their Loan amounts to buy a horse provided of course that the Horse races in Chennai under an ‘’A” License Trainer. In addition it is being considered to give a Bonus on Stake Money earned by the Horses purchased in the ring and racing under MRC Rules. The full modalities on how this will eventually pan out will be announced soon. But keeping in mind the fact that Juvenile Races  currently carry  a Total Prize of Rs.13,00,000/- makes the prospect of buying and racing horses at the Madras Race Club that much more attractive and lucrative.

And so the Festival Of Pongal 2017 could well be the birth of a new beginning. The four day Festival which signifies the advent the Sun’s journey Northwest will see MRC bathed in a new light as they themselves embark on an expedition that could well give Indian Racing just the sort of fillip it needs to awaken from slumber. And we all have the opportunity to be there to witness a celebration that promises to be a true game-changer.