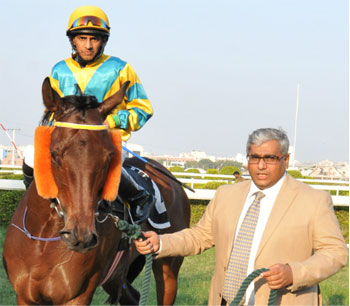 L.V.R. Deshmukh trained Highly Acclaimed (Phoenix Tower-Play That Tune) ran true to form in the division I of the Artillery Cup, that featured Sunday’s card at Hyderabad. The bay gelding had run suggestive races, improving closer to target over the last two starts this season and was rightly sent off as the favourite among the ten runners for the 1200 metres sprint. Jockey Nakhat Singh was quick to get Highly Acclaimed rushing up from an outward draw and settle to lead the pack as they settled down. Into the home stretch the youngster was galloping easily in the lead and was never bothered by the rest of them. In a close finish for the minor places, Starlight, Supurinto and Ans Ans Ans finished in that order.
In a pulsating finish Lax Mansing trained Naazaan (Whatsthescript-Quiet lane) denied the fancied Leading Legend a win in the R.W.I.T.C. Plate. Leading Legend was at the back of the field in the early part along with another fancied contender Handyman but improved after passing the halfway stage to be up with the leaders. On top of the straight Leading Legend surged ahead and was looking good when Kuldeen Singh started to ride out Naazaan and the 4 years old crept closer along the rails and with a final heave managed to have its nose ahead at the wire. Doroteo finished third followed by Kalinda.
L.D’Silva trained Asteria (Green Coast-Alero) pulled it off in the lower division of the Artillery Cup. The filly chased the leader Symbol Of Gold till entering the straight and surged ahead to take charge. Mahathi, Ikigai and the short priced favourite Fashion High started to charge in inside the last 100 metres but Asteria touched the winning post first followed the other three in that order.
Debutante Dunkirk (Surfrider-Associate) from Arjun Anne’s yard showed good speed to win the Corden Rouge Plate. After a good jump out from the gates Dunkirk led briefly and settled nicely in second when Exclusivenorthwind rushed to the front. Jockey K. Sai Kiran started to ride out Dunkirk inside the last 300 metres and the filly closed up the gap and raced ahead passing the distance marker. The race favourite Inci raise a gallop rather late and just managed to beat the fighting duo of Exclusivenorthwind and Soul Empress.
The grey colt Magical Skill (Ontario-Lenwade) who has found form woth for the second time from as many starts this winter, in the division I of the Banarsilal Gupta Memorial Cup. Shakesphere had set out on a start to finish bid over the 1100 metres dash and Magical Skill raced in fifth. Approaching the last 200 metres Magical Skill began to get up from the outside and with a fast turn of foot got to Shakesphere and stretched out easily. Chinese thought and Divine Heights finished third and fourth respectively.
Laxman Singh trained Rose Eternal (Virtual-Aline’s Wings) scored an encore in the lower division. Racing a close second behind Space Ship till into the straight Rose Eternal surged ahead and staved off the late bid of Shandaar. Bharat Queen and Space Ship filled the frame in that order.
K.S.V. Prasad Raju trained Strengthandbeauty (Multidimensional-Burooq) who had last won almost 21 months ago came good to lift the Royal Tern Plate. Hunter’s Pride was out in the lead right from the start over the 1400 metres trip and was looking good with a furlong left on the straight. Strengthandbeauty came up with a strong challenge from the outside and after a stirring duel with the relentless Hunter’s Pride, crossed over to win by a slender margin. The race favourite Wine N Dine covered some ground from the rear but could only finish third. Coruba completed the frame.
Trainer L.D’Silva saddled his second winner of the day through Carnival Express in the concluding race of the day, the Rainbows For Life Plate. Racing close behind the leader Time Is Luck, Carnival Express stormed ahead passing the 300 metres board and drew clear from Princess finishing second. Brioni got the better of Time Is Luck for the third place.