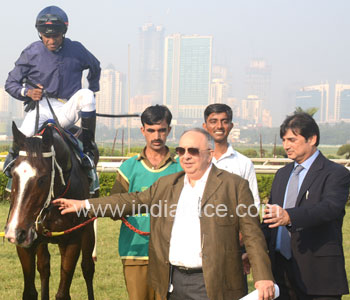 Pesi Shroff trained Temerity (Intense Focus – Narmina, Capricorn Stud) proved her class and superiority while scoring a facile victory and bagging the Maharaja Jiwajirao Scindia Trophy (Gr2). Temerity who had given her opponents a glimmer of hope while just about winning in her last outing, was different class this time round and the confidence of that win saw her dish out a thoroughly clinical performance with a start to finish win over the testing nine-furlong race.

It was all Temerity right from the start as she galloped at her own pace with the bunch of opponents chasing her all the way home. Palatial was tailed off last all through until they turned for home.

Temerity galloped on gamely with her regular partner Neeraj Rawal nursing her to pick up momentum on straightening up. Temerity responded to the call by accelerating smoothly and they had built up a handy lead coming into the final furlong. Whomakestherules put in a worthy gallop to make some headway and started to close-in on the favourite. However, Temerity and Neeraj Rawal always looked safe from any threat and were never in danger. Temerity kicked on and won easing up and Whomakestherules bridged the gap to end on the winner’s haunches. Aster Rose just made up the numbers unlike the previous couple of runs where she was prominent at the finish. Palatial improved well in the straight and finished on the frame.

Shroff trained Lincoln (Excelebration – Evelyne May, Highgrove Stud) lived up to the expectations and dished out a power-packed performance to score a very easy win. Taking off at a good clip, Lincoln, with apprentice Zeeshan in the saddle, cantered to victory once they turned for home. He galloped further and further away from his hapless rivals and completely outpaced them all. Oracle ended a faraway second, while Elysee, who was tardy at the start and tailed the field until well into the straight, did well to recover and finish third, close behind Oracle.

Earlier, Shroff had sent out Mozart (Dream Ahead – Desisterna, Highgrove Stud) to a narrow win to claim the Kheem Singh Gold Cup in a thrilling finish.

Art Manoeuvre led them early on and faded out after entering the homestretch. Retained Asset too didn’t quicken after being a close second behind Art Manoeuvre.  Oomph surfaced from between horses to take charge with about a furlong to go. Mozart lagged by a couple of lengths behind the field all the way until into the straight and then warmed up nicely to make a forward surge. He began covering ground briskly and finished on with a good burst of speed to gain rapidly on Oomph. Jockey Neeraj Rawal was at his best as he tackled Oomph strides from the winning post to snatch victory on the last stride by a whisker. Oomph looked the winner until he was shocked by Mozart at the wire.

Kimberella (Western Aristocrat – Catherine Linton, Highgrove Stud) picked up her maiden victory with a good effort and against a determined set of young rivals. She settled in the fourth spot behind Bishop of Derry, Arashi and Sagittarius and switched lanes soon on turning for home to make her forward surge. Bishop of Derry relented when pressed by Arashi and Sagittarius. Soon Kimberella joined the battle and after matching strides and encountering resistance from both Sagittarius and Arashi, Kimberella found that extra bit to sailed ahead and score with a couple of lengths to spare. Southern Storm arrived late on the scene finishing close behind runner-up Sagittarius and was an eye-catching third at that.

Priceless Art (Excellent Art – Priceless Glory, Villoo’s Greenfield Farm) overcame a rough passage and burst through just at the right juncture to pick up her maiden victory after going down narrowly on her recent debut. She was way down the field on entering the homestretch but jockey Yash Narredu was deft in his riding and found the right gaps to make steady progress.

Collegium had taken over from early leader Arabian Storm soon on entering the straight and was galloping away leading by a handy two lengths approaching the distance post. Once Yash showed daylight to Priceless Art, the Malesh Narredu trained filly accelerated well to down Collegium and head towards the wire. Adonijah arrived with a late but good burst to gain ground, but was a tad too late to make a telling impact. Priceless Art won the SM Shah Trophy by under a length from Collegium with Adonijah adding pep to the finish.

Invictus Maneo (Phoenix Tower – Soul Sister, Manjri Stud) showed that he had retained his winning form while making a successful debut in Pune and galloped strongly in the final furlong to add to his solitary win thus making a good two-from-two start to his career.

Multistar looked good leading them into the straight and carrying on with his momentum. Stunner drew closer to challenge, but failed to sustain. Furiosa too as going all out but could not quicken well enough to make any impact. El Tycoon and Invictus Maneo started to cover ground and gain on the front runners. Invictus Maneo warmed up nicely and responded to jockey Dashrath Singh’s call and soon picked up speed to zip past them all and land the spoils. Multistar was gritty to retain the second spot from El Tycoon.

Samarjeet (Varenar – Honey Run, Equus Stud) is turning about to be a consistent performer and defied the weights vis-à-vis Baby Face to beat him again. Baby Face faded away surprisingly soon on turning for home and favourite Drogo took charge. Samarjeet obviously is in top form and fitness and jockey CS Jodha soon mounted his challenge. Drogo was ridden all out but could not shake off Samarjeet. Samarjeet got stronger in the final furlong and finished on a lot better to score his second victory this season, looking good to add to his tally.

Fantasia (Midnight Interlude – Opera Ridge, Highgrove Stud) won the concluding race of the day by a widening margin to stamp out the opposition with ease. She was third at the turn and then gathered good momentum to pack a punch in her finishing. She bounded ahead and it was all over. Suraj Narredu kept her going all the way past the winning post winning by a healthy margin. Star Scholar ended a tame second, while favourite Towering Strength improved towards the end while finishing third.

For the professionals, trainer Pesi Shroff saddled a treble and Malesh Narredu a double. Jockeys Suraj Narredu and Neerah Rawal scored a double each as well.