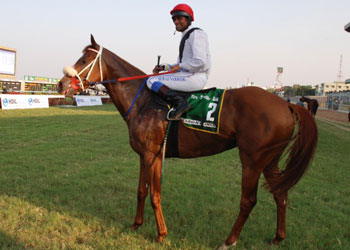 Arabian Prince, the property of Dr. and Mrs. Vijay Mallya representing United Racing & Blood Stock Breeders Limited, won the Vijay Textiles Golconda Derby Stakes (Grade I) in an amazing fashion, witnessed by a packed grand stand. Suraj Narredu was the cynosure of all eyes, when he thumped his left hand in the air, pointing at the crowd, to acknowledge the loud cheer that erupted from the stands. Trainer Jaggy Dhariwal was mighty thrilled by the performance of Arabian Prince. The loading process was stretched to almost 10 minutes as Hussler was trying the patience of the gate staff. Saint Vinvent, Fleet Indian, Fair Option and Incredible waited behind, with the rest having already moved in, as Hussler was throwing his tantrums.

Once the withdrawal of Hussler was announced, the horses which were in waiting went in with the exception of Incredible, who began to play up. Incredible finally got loaded but by then Saint Vincent, feeling nervous inside the gates, threw himself up and in the process jockey Paul Mulrennan was hit on his forehead and looked dazed. Sain Vincent was also withdrawn and the reduced field of fourteen was finally dispatched hurriedly. As the field traversed the half-way stage, Classerville was bowling along in front followed by Fleet Indian, Arabian Prince, Fair Option, Al Fatah, Systematic, Vijay Siddanth, Sans Pariel, El Paso, Optimus Prime, Sparks, Davenport, Incredible and Grand Rapids. The pace was fast and Classerville was the first to enter the straight with Fleet Indian looking to challenge on the outside. Arabian Prince found the gap in between these two and with a great piece of jockeyship from Suraj Narredu, found the acceleration and shot ahead of Classerville to emerge victorious. Arabian Prince’s win cannot be considered as out of the blue, as the son of Burden of Proof, stopped the clock at 2 minutes 28.07 seconds, which is a new course record, the earlier record being in the name of Zurbaran for the last seven years.

Mr. Zeyn Mirza, who received the Derby Trophy from Mrs. Charul Gupta, attributed the success to team work. “Jaggy has done a wonderful job in keeping the Prince in top condition,” confided Mr. Mirza. Jaggy was very excited and commended Suraj’s ride in the race. Being a part-owner of the more favoured Sparks, Jaggy said that he was happy Arabian Prince won the Derby as he had trained it, when asked which one he was cheering for. The first six places in the Derby were bagged by Bangalore-based horses, which is a rare distinction. Although Arabian Prince is the son of Burden of Proof, he is considered to be bred at Usha Stud as the dam Arabian Rose had moved to Usha Stud to be covered by Steinbeck in the subsequent season and the birth of Arabian Prince was at Usha Stud. In an exclusive chat with Indiarace after the race, Suraj Narredu dedicated the victory to his parents. “God has been very kind to me.

It’s Almighty’s blessings and my parents support that I have been having a good year and I could win this Derby that had eluded me all these years,” said Suraj. “My parents have been my backbone and they have supported me in my ups and downs,” continued Suraj and added that Hyderabad was like his second home and winning a Derby at this centre was a dream and it has been finally accomplished. “Somewhere down in my heart I had a feeling that I would win the Derby.” Suraj said that he had many offers in the Derby and after deliberating all of them he opted to ride Arabian Prince as he was the only one he felt that could give the in form Systematic a run for her money.

Commenting on the running of the race, Suraj said that the pace was very fast and Arabian Prince did everything right on the day. “Arabian Prince has a tendency to loaf, once he gets to the front and that’s why I settled him in fourth and made my move only in the final 300 metres.” Suraj had hurt his right wrist in the preceding race while riding Flaming Ruby and was ready to opt out of the Derby ride, when his uncle, Mallesh, gave him a pep talk and pushed him to give his best. The rest is history.

The Leader Lifts The Million: Trainer Shehzad Abbas-trained The Leader won the HDIL Juvenille Million in taking style. The Leader ran just the opposite of what his name suggests, till the top of the straight, loitering in the last position. Vijay Damini made all the running in front and looked to wrap up when Tom Mclaughlin brought The Leader with a sizzling run to zip past the entire field. The acceleration and the turn of foot of The Leader in the last 200 metres made the rest of the field look like they were running in slow motion.