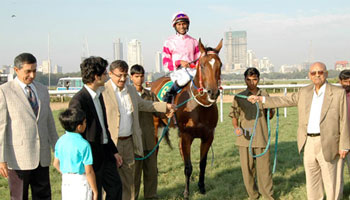 Trainer Pesi Shroff ended the year on a high note saddling a short-priced treble on the last day of 2009. Churchill, Onassis and Macchupicchu all won their respective races but it was Onassis who impressed the most. Onassis (Glory of Dancer – Rahy’s Serenade) compiled a fluent victory with absolute authority while demolishing the opposition with ridiculous ease. Easing into the race regardless of the pace, jockey Paul Mulrennan could have settled anywhere in the small field of six runners. De Nada was earlier withdrawn on vet grounds. Arabian Champ led the field home with a sizable lead which was reduced to a nought when Onassis started to warm up inside the homestretch. Onassis gained at a fair clip and looked a winner long way from home. Triunfo’s late dash was good enough to win him the runner-up berth ahead of Fire Streak, but he didn’t even gain on Onassis at any stage. Onassis was far too superior and can notch up yet another victory before long. Churchill (Trans Island – Gin O’Clock) timed his run to perfection and got the better of The Giant who fought bravely but gave in to a better horse. The Giant, as per his style, hit the front and surrendered only in the final furlong. Churchill with Ruzaan atop was always behind the leader and even when The giant increased his lead was unperturbed until the turn. Ruzaan never allowed The Giant much leeway and when they took the turn had Churchill was close enough to mount his challenge. The Giant was reluctant to give away his grasp on the race but the inevitable occurred at the distance post. Churchill surged forward and easily went past The Giant and spared a length at the finish. Neither Tsesebe nor Fiery Fortune did anything of consequence. Macchupicchu (Emerald Cat – Anaroma) won his race alright, but he never looked well-oiled in his final gallop. Ocean Princess darted into the lead as they jumped off while Icon and Sweeping Quest were found wanting at the start. Macchupicchu set about in chase of the leader. As they turned for home, it was clear that none from behind would match up to the front pair. Macchupicchu came alongside Ocean Princess and had no trouble in passing the leader but had trouble maintaining a straight course. Macchupicchu though, was lucky that Ocean Princess was worse and drifted out alarmingly herself, to nullify Macchupicchu’s own folly. Macchupicchu, however, had maintained a handy lead and was never in danger once he passed Ocean Princess. Suraj Narredu once again was popular with the punters booting home two public fancies to forceful victories. Golden Memory (Ontario – Extreme Contact) pulled off a clinical victory and won without raising a sweat. Settling into the second position behind Their Lil Sister, Suraj did not move a muscle to get past the leader who was clearly tiring in the straight. Golden Memory cantered ahead and drew clear of the rest. Kite Runner showed some last moment hurry to grab the second place, while Prince of Troy ran into place money pegging back the leader Their Lil sister just before the winning post. Mansoor Shah trained the winner. Suraj later partnered Forever Young (Diffident – Caractere) to a well-fought victory over the stubborn Samper Eadem in the Director General of Police Cup, the main event of the day. Flames of Fire brought the bunch homeward and let the tougher ones fight. Samper Eadem took charge early in the straight and kept the race alive until the winning post. Forever Young came alongside soon on passing the 400 m marker and the duo battled on fiercely thereon. In the final furlong, however, it was clear that Samper Eadem was fighting a losing battle as Forever Young grew stronger at the finish. Trainer Imtiaz Sait had done well to keep Forever Young fresh and fit as was evident by the spirited gallop that Forever Young put up at the all important end. Suraj Narredu could not add to his double as in the last race of the day, River Memories just managed to nose him out in a close finish with Black Rainbow. Suraj did all the right things and even managed to poke through narrow gaps and got Black Rainbow to put up a stiff fight with the favourite River Memories. The pair matched stride for stride all through the final furlong and River Memories from Siraj Sunderji’s yard, got the nod right at the wire. This was the best race of the day with jockey James Doyle and Suraj Narredu fighting every inch of the ground in the straight. Up North (Local talent – Monarchy), from trainer Subhag Singh’s yard, caused a major upset in the day’s first race. Up North, who was running after a lay off, showed no signs of any rustiness and galloped smoothly to launch a successful start-to-finish mission. The more fancied trio comprising Nymph, Green Signal and Premier Connection were comprehensively beaten. Green Signal though kicked on to end runner up. Oriental Magic put in a spirited gallop and finished a close third. Neither Nymph nor Premier Connection raised any hope in the race. For the professionals, trainer Pesi Shroff sizzled with the treble. Jockeys Suraj Narredu and Paul Mulrennan scored a double each.