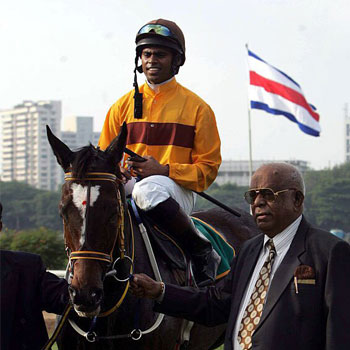 Sad news drifted in for the racing fraternity a day after Christmas - that of the untimely demise of champion jockey B Prakash, who succumbed to a massive heart attack in the wee hours in Mumbai. It is learnt that Prakash decided to travel to Pune late in the intervening night of 25th-26th December and was in a cab at Dadar when he suffered the heart attack. He was accompanied by a close friend who rushed him to KEM hospital, but Prakash, sadly, could not manage to win this fight and succumbed soon after.

Prakash started his riding career in the mid-90s and didn’t take too long to establish himself. Son of former jockey PS Bhonsle, Prakash did his father proud by soaring to great heights in his career. B Prakash is the only Indian jockey to breach the ‘2000 winners’ landmark, which include about 120 Classic successes. He was an astute jockey with a great sense of judgement right from his early days. He made a name for himself and soon earned the respect as the jockey to reckon with on sheer merit and performance. He achieved a high success rate, riding alongside top jockeys when competition was thick and tough.

Prakash donned the silks of almost every top owner in the country. It didn’t take too long for one of the top minds in racing – the late Dr MAM Ramaswamy to spot his talent and the doyen of racing roped him in to ride his horses. This was a huge upward swing in his career. Prakash rode with aplomb and achieved tremendous success in the famous ‘Goldie-Brown’ silks for years.  He won every Classic in the country including the biggest of the land, The Indian Derby (Gr1), several other Indian Classics as well as the prestigious Indian Turf Invitation Cup (Gr1) and this association flourished through the decade.

Managing his weight and perhaps a bit of fatigue may have prompted Prakash to hang his boots in 2012. However, very soon he was back in the paddock, this time in a new avatar, as a trainer. Prakash however, had only mediocre success during his rather short stint as trainer, which has now come to an abrupt and shocking end!

His funeral was held in Pune and he now rests in peace. He was only 40 years of age and is survived by his aging parents, wife and two daughters and his brother.